Recently some pre Mute Depeche Mode demos have surfaced featuring three songs - Ice Machine, the unreleased Radio News and Photographic. Members of an excellent Depeche fan site Depmod.com http://www.depmod.com/misc/index.html (a must check out for DM fans) clubbed together and purchased the tape from ebay. I am not one of them unfortunately but did hear some clips online which were fantastic. They're worth hearing for Andy Fletcher's bass guitar playing alone - no joke.

Having heard them I listened to Speak and Spell for the first time in a while and really enjoyed it so I thought I'd write a bit about that era of DM as part of my entirely my own opinion series of articles about the band's discography. Fuller and better histories are available elsewhere however I hope you like it. I should note at the outset that I am by no means a DM historian so anything I write is either gleaned from too much time reading about the band or simply made up ;) 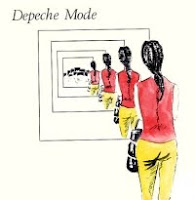 fair bit of major label interest Depeche Mode signed with Daniel Miller's Mute records who released their first single Dreaming of Me on 20 February 1981 with the single eventually reaching number 57 in the charts. The single was released on 7" (7MUTE13) only (see left) with the fantastic Ice Machine on the b side, both written by Vince. For me Dreaming of Me stands apart from a lot of the synthpop singles released at the time. That said, Ice Machine is the superior track in my opinion. The band were obviously enamoured with it too as they continued to play it live until 1984 or so. A German 3" cd version featuring both tracks is also available. 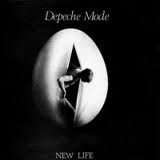 The band's next release came on 13 June 1981 with New Life which was backed with Shout! The band made their first Top Of The Pops appearance in support of the song which eventually reached number 13. As well as the 7" single (7MUTE14) (right) a 12" (12MUTE14) (below) was released featuring New Life (Re-mix) and Shout! (Rio mix). Puntastic. 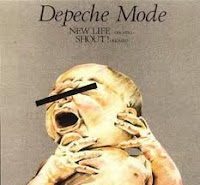 The Re-mix of New Life is may favourite track here. It's a bit more urgent than the 7" version and more interesting for that. Shout is a good track too although the remix is a bit ropey. The band did the remixing themselves which was the pattern for the next few years. That is very much a good thing as outsourcing the mixes doesn't always work - I'm looking at you Barrel of a Gun (Underworld Hard Mix). Anyway, back to 1981. As with all DM releases up to the Music For The Masses singles, German 12" coloured vinyl and cd versionsare available. New Life comes in a particularly brilliant black and white splatter vinyl. All DM singles up to Little 15 were reissued on cd by Mute in 1991 with each release featuring the majority of the commercially available tracks. New Life's cd features all tracks bar the 7" version as I recall. Corrections are of course most welcome. There was no video for New Life, so here's the band on Top of The Pops. 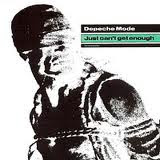 ly frustratingly) still their most recognisable track, Just Can't Get Enough was sprung on the world on September 7 1981 eventually climbing to number 8 in the charts. Backed with an instrumental Any Second Now the single was available on 7" (7MUTE16) and 12"(12MUTE16). The 12" features an oustanding remix of JCGE (Schizo Mix) and a so-so remix of Any Second Now called Any Second Now (Altered). I have to say that I'm not a huge fan of this song. Other than the horror of What's Your Name its the poppiest 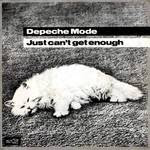 song from this DM period and it suffers for that. I guess it might be over familiarity that puts me off too albeit I was delighted to sing the Luis Suarez version of it on Sunday when we beat the Mancs. It's the song everyone thinks of when they hear the name Depeche Mode shortly before mentioning cross dressing and People Are People. Fine - every band has to have a landmark tune. I just wish it wasnt this one. The 12" release from Germany comes on either grey or white vinyl of which I only have the white. If anyone finds a spare grey 12" please feel free to send it to me ;).

So finally we turn to the debut album Speak and Spell (STUMM5) which came out on 5 October 1981 on cassette and vinyl reaching number 10 in the album charts. It's a good solid debut album that has stood the test of time despite the band's subsequent comments about it. The tracks are New Life, I Sometimes Wish I Was Dead, Puppets, Boys Say Go!, Nodisco, W 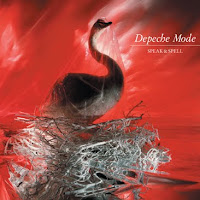 hat's Your Name, Photographic, Tora! Tora! Tora!, Big Muff, Any Second Now (voices) and Just Can't Get Enough. A subsequent UK cd reissue on 1988 or 89 (I dont have it in front of me as I type)added Dreaming Of Me, Ice Machine, Shout! Any Second Now and JCGE (Schizo Mix) (sleeve below). Of the albums main tracks Vince w 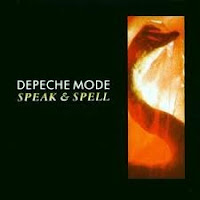 rote 9 and Martin Gore two - the instrumental Big Muff and the decent Tora! Tora! Tora!. The album features some genuinely great songs such as I Sometimes Wish I Was Dead, Puppets and Photographic which is the stand out track. Being picky, I'd have preferred the Some Bizarre version of the song from the Some Bizarre album but I wasnt there at the time and even if I had been I very much doubt that I'd have been allowed a say. The album is not without its' low points however. Vince really needs to ask himself why he thought What's Your Name would be of any use to anyone. It's a shocker.

The Speak and Spell era is an interesting one. The leap the band made from that to Violator in 9 short years is frankly amazing but their subsequent developments shouldn't detract from this era which contains some excellent music and of course Just Can't Get Enough. Vince famously left in 1981 of course having had enough of fame a decision which made no sense at all in the light his subsequent success with Yazoo and Erasure. Martin stepped up and the band's whole dynamic changed as I'll hope to show next time.
Posted by DJM at 10:41