As I keep banging on about, the amount of good new music Scotland is producing at the moment is frankly terrifying. I don't recall a time like this. We seem to be entering some sort of golden age of Scottish music and I implore you to get involved in it by seeing the bands live, buying their records and supporting what is rapidly growing and hugely exciting scene. I'm no expert in this being something of a latecomer to it. I'll leave it to people like Neil Wilson at Scottish Fiction or the chaps at The Pop Cop to tell you more as their sites contain more about Scottish music than I could ever possibly tell you.  What I can give you though are five bands to look out for this year so here they are:

1. MACHINES IN HEAVEN ( @MachinesHeaven @hotgemtunes )
I've written about Machines before and rightly praised their excellent Glasgow Jihad ep. March 14 sees the release of the band's debut album BordersBreakdown on Hotgem and it promises to be a cracker. The band are having an album preview night at Stereo on Renfield Lane on 14 March and you'd be well advised to get down there. All the info you need is on their Facebook page. Get into Machines In Heaven now before everyone else does.

2. CASUAL SEX ( @CasualSexBand )
Casual Sex' Bastard Beat ep released at the tail end of last year was a brilliant mix of sleazy guitar, dirty bass and randy vocals and was frankly brilliant. The band are creating a real buzz and are shortly embarking on a UK tour and rather impressively playing at this year's SXSW . You must check out the Bastard Beat ep and do keep an eye on Casual Sex. Again, check their Facebook page for all info and go here to buy their music

3. CALL TO MIND ( @calltomind @OliveGroveRCRDS )
I first heard Call To Mind when I reviewed their majestic single A Family Sketch for Scottish Fiction last year (review). It's still available as a free download which you'd be mad not to get. The band are gearing up for the release of their new album The Winter Is White on 12 April with a show at The Glad Cafe. This band improve and improve with every release so their album is something to be very excited about. It's coming out on the excellent Olive Grove label and you can buy that label's back catalogue in The Glad Cafe too. Check out Call To Mind's Facebook page for all the info you need.

4. RANDOLPH'S LEAP ( @randolphs_leap @LostMap )
Is there a more prolific band than Randolph's Leap? They seem to release an e.p. every week and play live more than anyone else I know be it as a full band or an Adam solo show. Their first full length LP Clumsy Knot is coming out on the excellent Lost Map label on April 7th and the band will play a launch show at the Kinning Park Complex on 5th April. If any of their many previous releases are a guide to go by we're in for a real treat. The band's Facebook page will tell you everything you need to know 5. ATOM TREE ( @AtomTreeMusic @hotgemtunes )
It's usually only Depeche Mode related matters that I am repetitive (to be honest I've not even started on them yet!) however I have mentioned Atom Tree many times before and I'm going to keep doing it. To follow the exceptional Tide Of Thorns ep the band will be releasing new music this year which HotGem head honcho Clair has already heard and excitedly tweeted about. You really must keep an eye on Atom Tree as they are genuinely special. The buzz Tide of Thorns created was huge and not just locally - people ears all over the world pricked up. Keep an eye on their Facebook page for news because there is much to come.

So there you go - five to keep an eye on. There are so many more bands out there I could mention but I need to draw the line somewhere. Do check out all these bands and indeed the labels they are on as every one of them will brighten up your day.

Scottish Fiction is a Scottish music blog run by Neil Wilson which in his own words is "one man's attempt to promote, discover and introduce new (and old) music." It's as comprehensive a guide to the Scottish music scene as you're likely to find but what makes the whole project more pleasing is that it is augmented by Neil's Scottish Fiction radio show on Pulse 98.4 FM which means that shortly after reading about new music you can hear it too which is really cool.

As well as tracks by all the Scottish artists you'd expect Scottish Fiction gives airtime to many unsigned bands or bands on small labels giving them crucial exposure especially in these times of the airwaves being filled with mundane crap in the main. There are regular session tracks too and 21 of the best of these feature on The Scottish Fiction Sessions which is a download only release from which every penny raised will go towards supporting local independent radio like Pulse Community Radio. The album will set you back £3 which is less than the price of a pint so there's absolutely not reason not to go and get it - https://scottishfiction.bandcamp.com/album/scottish-fiction-sessions 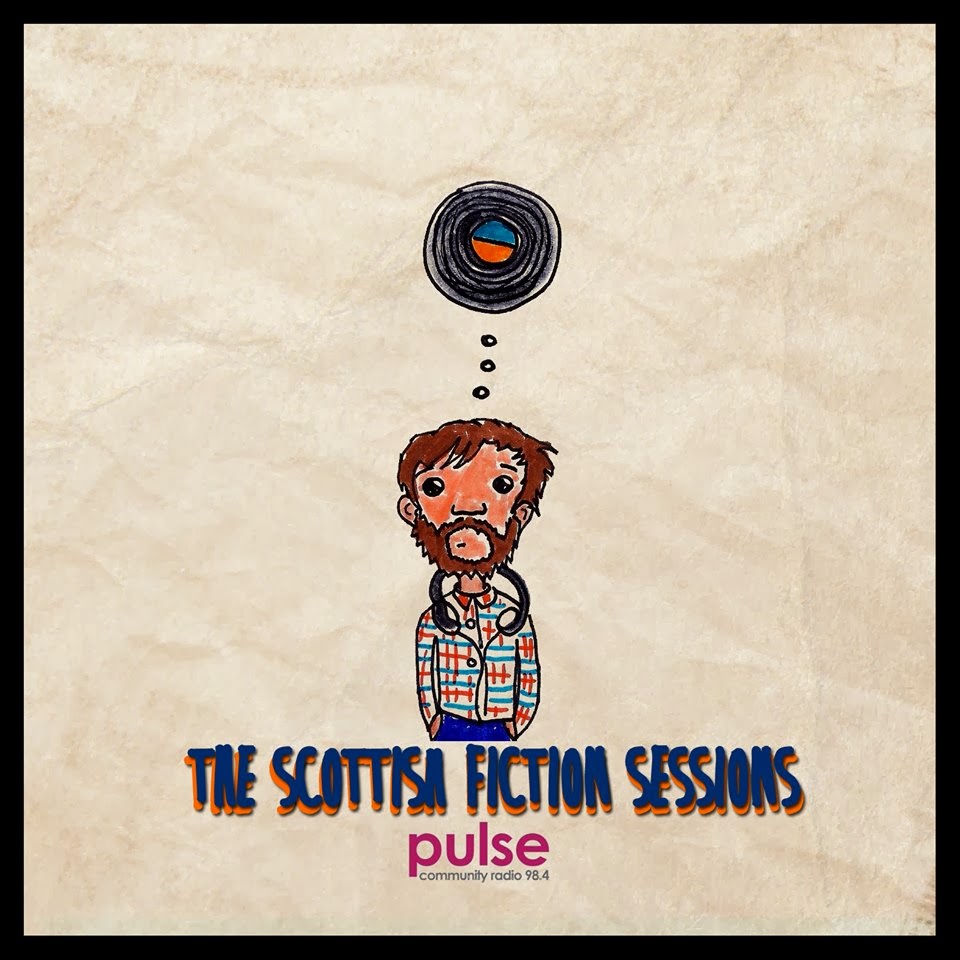 The album features a whole host of artists from Campfires In Winter to Fake Major to Julia Doogan to RM Hubbert and beyond and it's already brightened up what is a drizzly cold in Glasgow. Campfires In Winter's version of See Us There, Both is an absolute cracker. Whether you want to support what is a thriving local music scene or you want to support local radio or if you even just want to discover 21 new artists that you really should hear then you've got to go and get this.

ENJOY THE SILENCE AND ME

Today (5th February 2014) is the 24th anniversary of Depeche Mode releasing what is for me their greatest work, Enjoy The Silence. Every so often you hear a song that has a profound effect on you; it rewires your brain, makes you hear music differently and in some small way changes you. Enjoy The Silence did all these things for me and did them permanently. Simply put, it's my favourite song of all time and there will never be a piece of music released that changes that


To describe how much Enjoy The Silence changed my life I should give this some historical context. I was 15 when it was released and whilst I had 101 and liked Depeche Mode they were only one band of many and that selection of bands was headed by INXS. The first time I heard Enjoy The Silence was in my mum's car on the way to school and I was stunned. It sounds like a cliche or something made up to make this blog sound more interesting but I genuinely remember everything about the moment I heard it - the beats, the melody, the lyrics, everything. Music hadn't sounded like this before.
At the first available chance I headed to Dumfries and bought the 12" which contains 4 tracks in all - the 7" mix, Enjoy The Silence (Hands And Feet Mix), Enjoy The Silence (Ecstatic Dub) and an instrumental Sibeling. The remixes, as is the case with all the remixes of this single, are great. They bend and twist the song in new ways but never lose any of its' brilliance. This was my first exposure to the world of Depeche 12" singles and remixes and like when I first heard the lead track I was mesmerised. Who are these people and what are they doing to me? We had a family holiday in the summer of 1990 travelling to Italy by train (don't ask) which was a complex enough operation that I chose to make more complex by buying the limited edition remix 12" in London on day 1 of the trip. I guarded it all the way to Italy and back and played it as soon as I got back to Castle Douglas. The remixes (Bass Line and Ricki Tik Tik Mix) were and still are immense and the instrumental track Memphisto lovely but the stand out is the Harmonium mix of Enjoy The Silence which is just Martin and a harmonium. It is the track as Martin originally intended it before Alan Wilder took it to the disco. I didn't know this at the time as my desire to become a Depeche Mode dullard hadn't yet hit me but I remember loving the fact the song had a completely different feel and pace in that mix which really showed off the beauty of the lyrics. So, so good.

The final piece of the Enjoy The Silence jigsaw fell into place after seeing an ad in Melody maker for an ultra limited one sided etched 12". I picked it up in a record shop on the Whitesands in Dumfries which for some reason had a load of the 12" and equally limited cd single for 99p each. I only bought the 12" which like the cd contains one track - Enjoy The Silence The Quad: Final Mix which is a four part remix by four different remixers lasting just over 15 minutes. It's odd in places no doubt but it's great. The annoying thing is that when I started properly collecting Depeche records I had to pay over £30 for the cd I could have bought when I was 16. 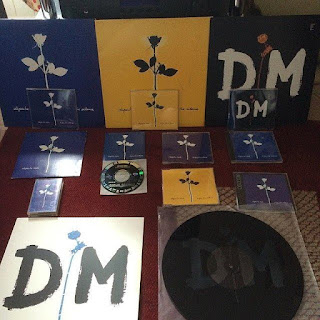 Enjoy The Silence is just perfect. You all know the song and I'm sure nearly all of you reading this love it. The video is iconic and is the perfect mix of Depeche's music and Anton Corbijn's art. One thing I especially love is the intro to video. That particular version of the song has never been released other than on the video and it is the definitive version for me. The single artwork, again by Anton, is simple and beautiful and Martin's lyrics never fail to move me. This was a band at their peak and everything they touched at that point turned to gold. I can't believe the song is 24 years old and I can't believe it's been 24 years since I first heard it. Unlike me, it's not aged at all.