Six Toes have recently released their fantastic new album The Morning After which amongst its' ten tracks features Low Guns with vocals by Depeche Mode's Dave Gahan. Low Guns, originally released on limited edition cassette single last year,  is a beautiful track and is one of the great Gahan vocal performances. Fans of Depeche will know Six Toes anyway, following the fantastic remixes of Jezebel, Peace and The Sinner In Me that the band produced in the last few years. The unique sound of those remixes is carried on in this album which really is a treat and I recommend it to you all.

The band have kindly allowed me to give way not only a copy of The Morning After but also its' predecessor Trick Of The Night, both on cd. To win these simply answer the following question and email your answer to almostpredictablealmost@gmail.com . The competition closes at 12 noon UK time on Monday 7 July. A winner will be drawn at random just after that. The question is:

Q: HOW MANY COPIES OF THE FIRST EDITION OF THE LOW GUNS CASSETTE SINGLE WERE RELEASED LAST YEAR?

Glasgow's Atom Tree played a fantastic headline show at Broadcast on Friday. They're a band I've been following for some time and have previously given you plenty of opportunity to find out how good they are (Tide of Thorns ep review here). This show show was the first I'd seen since Julie Knox joined the band on vocals and synths and I have to say that it was a fantastic, captivating show.

The band's set flowed perfectly and the whole crowd were into the show from the off. This is some of the most innovative electronic music around just now and with the addition of Julie's vocals the band's whole presence has grown. What is cool is the fact that the band are all clearly so into the music as is best exemplified Shaun's almost hyperactive playing which was especially impressive given his height and the low ceiling.

The set was a joy from the brilliant Desired Effect through a great version of new track See The Light to a frankly epic Die For Your Love which is a song that everyone on earth should here. There are times when electronic music is so moving and all encompassing that you get lost in it. That was one of these time. Absolute perfection. My two friends who were with me were seeing Atom Tree for the first time and they are now converts. Go and listen to them through the links below and see them live - you will be converted too.

Many readers of this blog, and indeed many Depeche Mode fans, will know who Deb Danahay is. Way back when the band started, Deb was Vince's girlfriend and she ultimately ended up running both the Depeche Mode Information Service and the Yazoo fan club. She has therefore seen and experienced Depeche related activity that would make 99.99% of Depeche fans green with envy. Even before you read on, you simply have to check out Deb's Facebook pages which contain a remarkable collection of pictures, diary entries and information. They are a must see - links below:

In addition to those treasure troves, Deb will also be hosting a memorabilia exhibition at The Electricity Club's forthcoming TEC003 on September 12 at the Hertford Corn Exchange. It will be a rare chance to see first hand a whole host of Depeche artefacts. All information regarding the event can be found at The Electricty Club's Facebook page https://www.facebook.com/theelectricityclub?fref=ts

Finally, Deb has now started up a fantastic service called Depeche Mode In The Beginning - Private Tour. The tour will take you all around the band's formative Basildon hotspots and it looks like a fantastic way to spend a few hours. I know I'll be going on it soon. Check out the Facebook page for further information and booking details https://www.facebook.com/pages/Depeche-Mode-in-the-Beginning-Private-Tour/561019507327732?fref=ts

As you can see then, Deb is someone who, it can safely be said, has forgotten more about Depeche Mode than most of us have ever known. I was absolutely delighted then when Deb agreed to answer a few questions for me. As well as corresponding by email, I was able to meet her in London when we were both heading to The Cure show at the Royal Albert Hall in March. If nothing else, it gave me the chance to apologise for the sheer number of questions I sent her! Here we go then

APA: When did you first get to know the band?

DD: Dave was at the same school as me and we used to go to the same pubs, clubs, gigs and parties. I knew him quite well even before Depeche Mode. We were very conscious of the latest fashions and music. I loved him as he was very shy back then! I got to know Vince through Robert Marlow. Rob was in the same social circle as me and Dave. We all went to see a Gary Numan and OMD gig in 1979 before either band had made it for example.

APA: Did you ever see Composition of Sound play?

DD: They actually played at a party on 30 May 1980 I organised with my friend Nik. Nik was at school with Martin, Andy and Rob. I hired a hall called The Paddocks however it had a burst pipe so, rather than watch the band I ended up sorting that out! I still have a handmade ticket from the party and a local fanzine review of the gig that was written by my brother. Dave was at the party too.

APA: How about the early Depeche gigs? Did you attend the legendary shows at Crocs and the Bridgehouse?

DD: I attended a lot of the Bridgehouse gigs and I was a regular at Crocs anyway. The gigs were always exciting. Basildon and places around Southend had so many people who were into the music and fashion scene at the time. There were small clubs running special nights purely for electronic music and some excellent DJ's emerged from that. All the band members had lots of friends who followed the band and went to the gigs. A lot of them still do today too.

APA: Moving on to the band getting a record deal, what do you recall about the early Mute days?

DD: To start with, Mute was just Daniel (Miller) and a lovely lady called Hilde. The label originally operated from Daniel's mum's house and I remember going there with Vince. When Daniel got an office, I remember that it was above another business and it consisted of only one room and a toilet. I'd go to London with Vince to the Mute office and to Vince's publisher Sonet too.

APA: The band became very popular very quickly. Was that something they found scary?

DD: The band's success happened so quickly that they didn't have a chance to be scared! They kept their feet on the ground as Daniel and Mute didn't go in for any particular extravagances. There were no limos or big launch parties for example. Also, Vince was very aware that any expenses came out of his royalties at the end of the day!

APA: Did you go to Top Of The Pops with the band?

DD: Yes I did. I went to most of the Top Of The Pops shows that the band did. It was such a thrill as it was the number one music show at that time and everyone watched it. I remember that Depeche seemed so naive in comparison to the likes of Duran Duran and Spandau Ballet who all seemed so experienced!

APA: Turning to the Depeche Mode Information Service, how did you come to be involved in that?

DD: Mute started to receive letters from fans so they got dished out to the band according to who was mentioned the most. Jo (Dave's then girlfriend) got Dave's, Anne (Martin's then girlfriend) got Martin's and I got Vince's. Andy's were shared out equally as he didn't have a girlfriend at the time. (APA - awww). To start with we sent individual handwritten responses but because more and more letters came in we decided to issue the newsletter. We did keep adding personal touches to some responses though. One of the joys of Facebook is that it has allowed people to see copies of these letters. It's also meant I've managed to get back in touch with many people I used to connect with through the Depeche Mode and Yazoo fan clubs

APA: Finally Deb, I have to ask about memorabilia. What are your favourite pieces from that time?

DD: I've got quite a few prized possessions. Luckily, I kept most of it and I'm still discovering bits and pieces all the time. Vince wasn't sentimental about things like back stage passes so I'd keep them safe. Some of the favourite things I have are:
1. Lyrics to Dreaming Of Me, handwritten by Dave in 1981
2. Vince's handwritten band members and band biog which we used to the fan club
3. The review and ticket from the Composition of Sound performance on 30 May 1980
4. The original fan club sheets and other items such as the Speak & Spell lyric sheet that was sold through the fan club
5. Numerous signed photos/record covers/backstage passes and private photos of the band before Vince left.

Thank you so much to Deb for giving up her time for this interview. As I said at the start of this piece, you really must check out all Deb's Facebook pages as you'll find a world of amazing Depeche and Yazoo things there. It's not often that you can get a real glimpse of Depeche Mode's world and so, for any fan of the band, the fact that Deb so generously shares all these things is a real treat. Thanks Deb!

(c) Almost Predictable Almost/David McElroy June 2014
No part of this article may be reproduced without the author's consent.

Glasgow's Analog Angel return with a new album Trinity that really kicks on from their previous works which fully displays the breadth of the band's talents. The band's first two albums leaned very much toward the industrial side of electronic music and they rightly became a well known name in those circles. 2013's Pride ep (review here) showed a more melodic, almost poppy side to Analog Angel and lead track from that release, We Won't Walk Away really impressed. Trinity takes over where Pride left off showing a band continually developing and indeed improving with the result that, if you're a fan of electronic music of any genre, there will be something for you here. 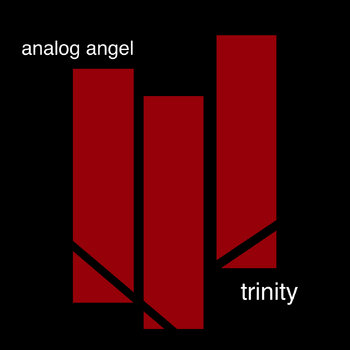 Trinity is very much an upbeat album. Lead single Drive is probably the best example of where the band are headed - it's an instantly catchy song propelled along on an almost Depeche Mode like bass with a synth riff you can't shift from your head. Trinity's key is the interplay between the synths, which sound bigger and bolder than ever, and John's stentorian vocals. More than ever, the two merge and work perfectly as is displayed on standout tracks like Shout, Inner Voice and Lose Control. Interestingly, John passes the mic to Derek on The Chase and the results are great. Could Derek end up being the Martin Gore to John's Dave Gahan? Future solo acoustic spots at AA gigs surely await.

Overall, one of the great things about Trinity is that Analog Angel are now very much a band in their own right. Whereas previous albums may have been slightly in the shadow of some of the band's key influences, Trinity is the sound of a band pushing in their own direction, with a unique sound that, whilst no doubt influenced by certain bands and genres, seeks only to look forward and to develop. You get the feeling that there is much more to come from Analog Angel which is exciting. In the meantime though, Trinity is a excellent album and one that you really should check out.