A short one this week as there are only two releases this is concerned with. And before both of my fans write in YES I do know that Personal Jesus popped out in 1989 but that'll be dealt with in the next thrilling instalment.


The worldwide response to Music For The Masses was such that Depeche Mode were perhaps unwittingly catapaulted into the stadium league come the end of that album's tour in 1988. The band booked the cavernous Pasadena Rose Bowl in Los Angeles with a view to putting on a Concert For The Masses. It was an audacious move - could a synthpop band from Basildon really take on the U2 and the like and put on a stadium show? Yes they could. And it was bloody fantastic. To celebrate this momentous event, the band released their first live album 101. This is the story of that album. Well, not actually the story OF the album - more a blog about it. Anyway.....


To promote the album Depeche released their first live single Everything Counts (Live) on 13 February 1989. The erstwhile pop song was now a full 6 minute stadium singalong many miles away from its formative days on Top Of The Pops. The video for the song was cut from the then as yet unreleased 101 video by D.A. P

ennebaker showing bits and bobs from the film itself and of course starting off with Jonathon Kessler proudly announcing that they were going to make "lots of money...a load of money." Clever stuff. The song was released on a large number of formats including my favourite ever "What the fuck IS that?" format. Firstly we had plain old 7BONG16 (left) which featured live versions of Everything Counts and Nothing, the latter featuring a live guitar of all things. Madness. Next we had not one but two twelve inches. 12BONG16 (below left) gave us a whopping four live tracks - Everything Counts, Nothing, Sacred and a quite marvellous version of A Question Of Lust ( the "you know that I'd rather be home part where Martin sings "home" is frankly perfection). The limited ed

mixes - Everything Counts (Remixed by Tim Simenon & Mark Saunders a.k.a Bomb The Bass Mix), Nothing (Justin Strauss Remix aka ZipHop Mix - really) and Strangelove (Tim Simenon and Mark Saunders Mix which I believe is also known as the Hijack Mix). The Simenon/Saunders mixes (please see depechemode.com for the list of alternative titles) are both excellent and I still love them. I've always had a soft spot for Bomb The Bass anyway (Baby Dont Make Me Wait, Dont Make Me Stay, In and Out Of Looooove) and these are crackers, the Everything Counts mix even using a cheeky Kraftwerk sample. That version was also the basis of the World Violation live version and used to a lesser extent in the Devotional one (thanks Shaun!). T

he remix of Nothing is ok really, nothing more. This being the late 1980's 3 inch cd singles were all the rage and this release prompted Depeche's first releases on that format. CDBONG16 (right) contained the same four tracks as the first 12" and and LCDBONG16 the same three tracks as its limited 12" counterpart. The beauty of this version however was the packaging it came in. The Margaret Thatcher era was responsible for numerous horrors one of which was the emergence of rich young tossers known in the UK as Yuppies. They pion

eered the use of filofaxes which were essentially diaries for people who thought diaries weren't fashionable enough. Bear with me here. Being both fast AND fashionable, Depeche Mode jumped on this bandwagon and released an ultra rare "Filofax Pack" housing LCDBONG16. The evidence is to your left. How completely odd but how completely brilliant. Within this Filofax pack was a slot for the main cd single AND it was punched at the side thereby enabling you to shove it into your filofax. You obviously couldn't listen to it but you could look at i

t. These are hugely rare but worth getting if you can. Alan is selling one at his forthcoming auction if you have the money. Mine is in a frame for protection (no I don't know why either) and that's where it'll stay. It's a great item. Finally we had our first ever 10" single to contend with (10BONG16 - right) and like the Filofax business this is a great thing too. It came in a numbered envelope type sleeve with a window sticker, 2 postcards and of course a 10" single which featured Everything Counts (Absolut Mix a.k.a Alan Moulder remix), Everything Counts (In Larger Amounts - as in the original 12" mix), Nothing (U.S. 7" mix - meh) and Everything Counts (Reprise - as in the last track on Construction Time Again). The artwork for all these releases is brilliant by the way. Many many formats featuring many great things AND a great video AND an iconic track AND.....it only got to number 22 in the UK. Disgraceful. 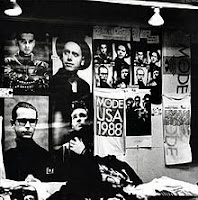 showing was impressive in the context of Depeche Mode's success there to that point reaching number 45. The album came in three formats - LP (STUMM101), cassette (CSTUMM101) and CD (CDSTUMM101). All have the same artwork (left) but each has its' own loveliness. The album is a double which comes with a large 12" sized booklet featuring some great Anton Corbijn photos. The CD's come either in a hard double box with booklet or in a soft box with booklet, the latter being my preferred one. Finally the cassette doesn't come with a booklet but it's just great anyway as it was the first Depeche thing I ever got. Me and 2 friends would listen to it repeatedly memorising every Yeah Dave shouted. Much to my non surprise but no doubt to my wife's regret I realised that I could still do that filling a recent drive from Pitlochry to Glasgow with my own rendition of the entire album. ("Are you having a good time... (Pleasure, little treasure)...I cant hear you - Are you having a good time?!)

The tracklisting of the album is: Pimpf (a brief version), Behind The Wheel, Strangelove (an AMAZING version), Sacred (casette and cd only), Something To Do, Blasphemous Rumours, Stripped (Second only to the Devotional version in its' greatness), Somebody, The Things You Said (beautiful), Black Celebration, Shake The Disease, Nothing (cassette and cd only), Pleasure Little Treasure (STOP THE AIR GUITAR DAVE FFS!), People Are People, A Question Of Time, Never Let Me Down Again (a storming version), A Question Of Lust (cassette and cd only), Master and Servant, Just Can't Get Enough and Everything Counts. The super audio cd (no I don't know what that means either) released on 2 February 2004 adds a real thriller - the WHOLE VERSION OF PIMPF! LIVE! To add to the pointlessness of it all it puts it at the end. As in after Everything Counts. After everyone went home. Hmmm.

Finally there was of course the video (and later the dvd) which is great and a must have for Depeche fans. It follows a group of young Americans (the boy with the blue hair, the boy who finds his girlfriend in bed with another boy after he leaves, the girl who goes out with the blue haired lad, the blonde girl, the girl who wears a hat, the girl who wears a hat albeit less than the last one and another bloke) who win a prize to get driven around America by a grumpy bus driver with the sole purpose of seemingly missing most Depeche concerts but ending up going to the Rosebowl gig. Look out for the oddball truck driver (I said smile motherfucker,smile), the hispanic Guns N Roses (Guns and posers) fans, the dance off at the beginning (shocking scenes) and of course all the highjinks in between.


There's plenty of the band too. Highlights here include Dave's taxi driver story, radio appearances (Well...you got three of the words right), Alan on the bus and Alan's keyboard explanation which is actually fascinating. There's live footage a-plenty too which seems to be cut from far many more shows than the Rosebowl one. Either that or Martin somehow changes his clothes twice during Everything Counts. You HAVE to own this dvd.


So that was the 80's then (yes I KNOW about Personal Jesus). We'd started as a Basildon 4 piece, survived Vince's departure, survived The Meaning Of Love, broken a frame, counted everything, been..er..greatly rewarded, mastered a servant (??), shaken a disease (not long to go now....), celebrated blackly, massed our music (I have NO idea what that means), never let ANYONE down and ended up filling stadia playing electronic music which essentially opened the door for ALL alternative style bands to do the same. Not too bad for a synthpop band.


What the dickens would happen next? Violator is the answer. I'll try and be as objective as I can about the greatest album ever recoreded anywhere by anyone (Hmmm...objective you say) next time.
Posted by DJM at 08:22