THE ALMOST PREDICTABLES 2015 NO.3 - BEST SINGLE

2015 has been a year when my ears have been stuffed with outstanding new tunes both from seasoned artists and from new ones.  One of the many wonderful things about writing this blog is the number of tunes that artists send me to listen to, so Best Single focuses on songs that have been sent to me or that I've stumbled upon online.  That means Everything Everything miss out for No Reptiles and Hot Chip miss out for Hurrache Lights but they'll cope. This isn't going to be a top twenty however as I don't want to miss anything out from what has been a great year for music - instead, it'll be a review of sorts followed by the virtual handing over of the virtual award.

Electronic music is this blog's main thing and a number of acts I've got to know and whose music I love have released a number of singles this year and they are all worth listening to if you haven't already. Leading the way are Tongues who's three singles (Anymore, Religion  and You Never Knew Me) have all been on heavy rotation round here this year. Check out Tongues Soundcloud page other them all. What makes Tongues stand out is the sheer digital perfection of their take on electronic pop. At the other end of that spectrum, you'll find the "melancholitronica" of Shards three singles ( Just To Get Something Started, Afterwards and Sad Sayonara, Goodbye) fit the band's self anointed description perfectly. Clever, thoughtful electronic music that, like Tongues, won't fail to move you. Again, check out Shards Soundcloud page to enjoy the music yourself.

Apache Darling are another band who've rightly grabbed a lot of attention this year. Firebird  was an example of powerful synthpop that really caught my ear this year. Their powerful love performances are always worth catching too. Also on the pop front, Kloe's Grip and Touch were highlights this year. You suspect that big things await Kloe. One of my real favourites this year were Twi§ted, the Glasgow based duo who are going to be huge next year. Everything they've released this year has been superb and Scunnered  was a close runner up to the event winner of this award. Here's the video for the track that the band released last week

Continuing the electronic theme, Shona Brown had a superb year with her 10 in 10 project which saw her release a single a month from November 2014 onwards. This year's Your Silence Is So Loud was my favourite of the bunch. Fiona Soe Paing's Heartbeat and Analog Angel's Your Breath  showed new exciting sides to acts, both of which promise much for the future.  Let's not forget HQFU too whose Dust & Dirt  and Ca$hle$$ Lip$ have already seen an Almost Predictable head her way. YuTaNi gave us one of this year's great tracks with Mt. Minakami. Away from Scotland, synthpop singles by Rodney Cromwell, High Jinx and the superb Priest were also highlights. Death Of Hi Fi's superb Swim Away is also a track you really have to catch from 2015.

It wasn't all synthpop though. Edinburgh's Gus Harrower produced confident, insanely catchy pop with Girl I Didn't Know and the marvellous Mt Doubt's Soak was a towering beast of a song. Wozniak and Kill The Waves also produced some superb material and Woodenbox gave us one of the songs of the year with More Girl Than Friend.

There's only one Almost Predictable however and this year, the Almost Predictable for Best Single goes to The Insomniac Project for their frankly perfect debut single In And Out (Of My Head) which this blog was proud to exclusively preview in August. This band is surely bound to get bigger and bigger. Their music is infectious and their live performances already have something of a celebratory air to them that should only see them play to bigger and bigger audiences as they develop. One to keep and eye on for certain. I caught up with Debz and Andy from the band for a chat. Before we get to that though, have a listen to the track


APA: Congratulations on winning the Almost Predictable for Best Single for In And Out (Of My Head). How's 20125 been for you?

Andy: It's been a great year, put simply. Even though we launched as a band in late 2014, we feel that this has been the first year that we can look back on and appreciate what we've done. We've hit a few milestones that we wanted to hit and, most importantly, we are on the up and pushing forward with more exciting things. We're played some great shows and still have a couple more to play, so for me, personally, having the connection and energy on stage and seeing it rub off on the crowd has been a highlight.

APA: What have been your highlights of this year?

Debz: There are two highlights for me. Our single launch at Sleazy's was mega. The venue was packed and the atmosphere was amazing. (APA: I was there and it was). I have to say though, our recent gig at King Tut's with Crash Club and Our Future Glory was something else! I've seen so many of my favourite bands play there, so I felt a bit giddy. It was a wicked night, although I think I'm still feeling the effects of the overzealous lighting man and his extreme strobe action!

APA: How did you find the reaction to the single? It seemed to go down extremely well.

Debz: We were a bit overwhelmed with the reaction to the single, so many kind words from bloggers and journalists. It was definitely what we wanted for the first single, but it's certainly not what we expected. In fact, we got quite a few emails that we were looking at thinking "Is this spam? Because if not it's AMAZING!" 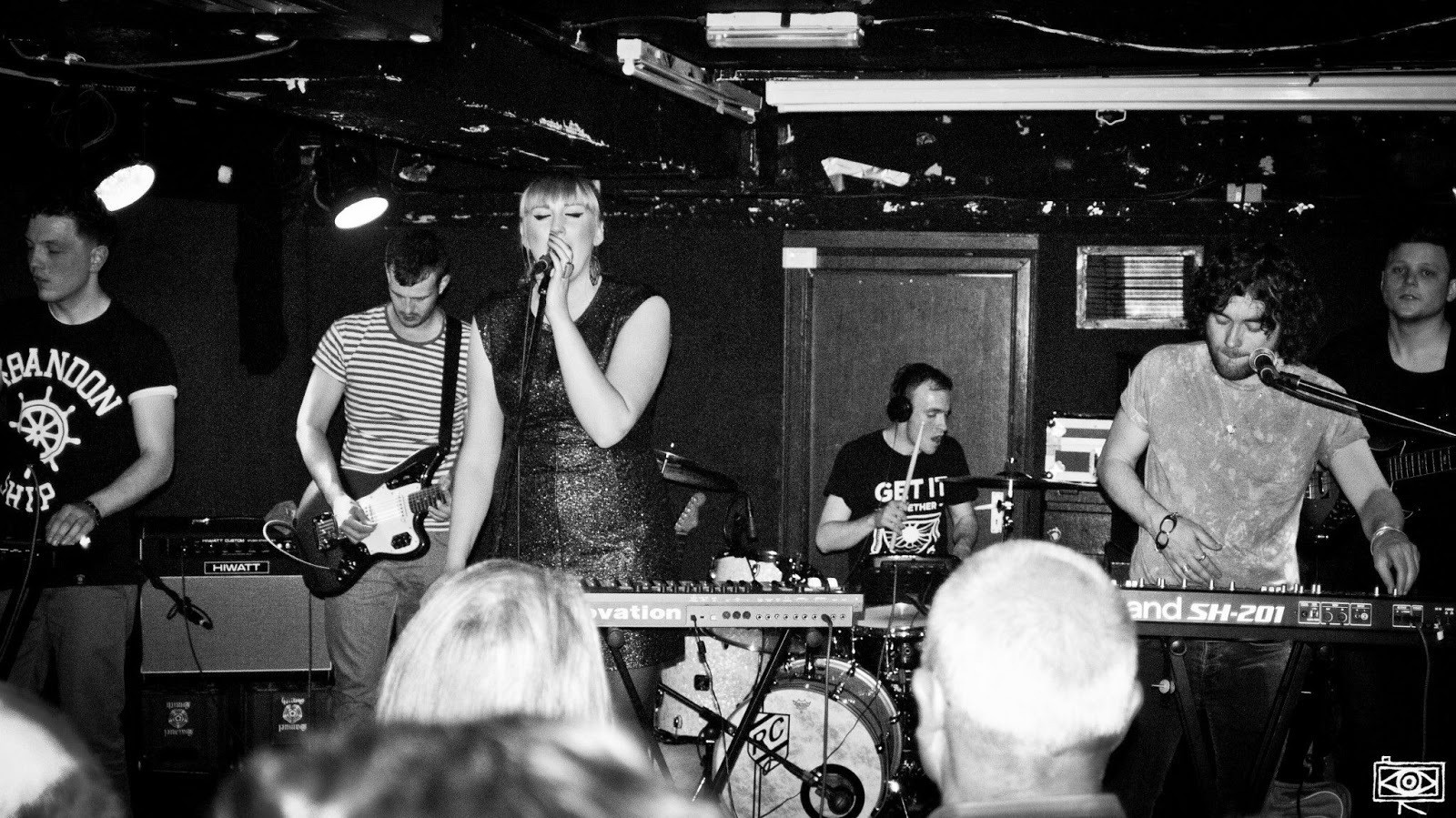 APA: Your live shows are fast developing a reputation for being something special - how have you found the reaction to your gigs this year?

Debz: We've only played a small number of gigs, so to see people dancing and singing along to stuff is brilliant. I'd like to think we always bring loads of energy to the live shows, so it's amazing to see the audience getting into it too. We're definitely going to try and play a lot more next year.

Debz: As well as getting a few more gigs under our belt, we're working on a new single. I get the feeling 2016 will come with as many surprises as 2015. We've got a bit of a plan in mind, but the exciting thing is seeing what unexpected things happen along the way.

Andy: Yeah, as Debz say, we do have a plan in mind, however, ultimately we just want to keep growing as a band and keep having fun. We feel we've only just scratched the surface as far as exploring sounds and writing material is concerned so there will be plenty of time spent creating new songs and, critically, letting our fans hear them live and on record.

Andy: Got to be honest, I'm not the biggest DM fan (sorry) (APA - that's ok...) however they do have a couple of cracking songs. Personal Jesus is really tribal and has a great drive to it - out of their big hits that's definitely my favourite. As a more left field option. The Things You Said from Music For The Masses is a really nice song. It screams 80's New Romantic, however it does have a sense of timelessness about it and some of the synth lines and lead parts are beautiful. It's a sort of lullaby almost, similar to Asleep by The Smiths which is another song I love

Basically, picking The Things You Said forgives any suggestion of not being a big DM fan - easily one of the band's most wonderful tracks. Anyway....thanks very much to The Insomniac Project for taking part and I look forward to hearing what the band has to come for 2016. As for all the other bands who've sent me songs this year, thank you too and please feel free to keep sending as much music as you want next year and beyond.

Email ThisBlogThis!Share to TwitterShare to FacebookShare to Pinterest
Labels: Apache Darling, Death Of Hi Fi, Glasgow, In And Out (Of My Head), new music 2015, Shards, Shona Brown, synthpop, The Almost Predictables 2015, The Insomniac Project, Tongues, Twi§ted