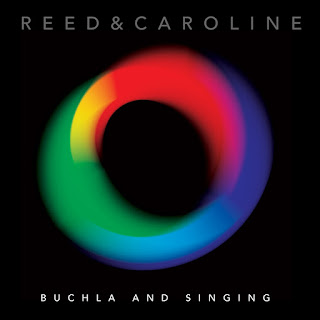 Reed & Caroline are a new signing to Vince Clarke's Very Records and they have just released their debut album, Buchla And Singing. As befits a release on Vince's own label, the music on the album is made on a Buchla modular synth alone. The Buchla was one of the first modular synths, with Don Buchla beating the perhaps more celebrated Robert Moog to the punch by a few years back in the 1960's. Sadly, Don Buchla recently passed away, but his wonderful, hugely influential invention lives on in this album and it's a fine tribute to him. Reed Hays' mastery of the Buchla is hugely impressive and it even outdoes his own label boss. When asked about the Buchla system, Vince said "I had one once but I sold it. It's way too difficult to use."  Now, if Vince can't master it, it must be tough.

Anyway, to the music. As I mentioned above, Reed Hays is in charge of the Buchla and the vocals are provided by Caroline Schultz, with both working perfectly together. The album opener Singularity (We Bond) shows off the pair's skills perfectly - it's as glorious a slice of synthpop as you'll hear in a long time. Caroline's vocal style brings to mind the likes of Jen Wood's vocals on The Postal Service's Nothing Better and they really are central to the album's success.


Electrons is another standout track, its futurist lyrics and crisp electropop having a distinct air of, for example, Kraftwerk's Radioactivity album albeit with a far glossier pop sheen. The track also features in remixed form as a bonus on the cd with Vince Clarke offering his own take on the song. It's a sparser affair, slightly reminiscent of his superb Behind The Wheel remix for the last Depeche Mode project and it's well worth checking out.

There are more experimental moments as you might expect given the machine that is producing the music here. Oh My Dog and Nightmarf for example, show off the Buchla's collection of impressive noises to impressive effect. Henry The Worm perhaps pushes the experimentation too far, with its twee lyrics not really hitting the spot, but that aside, there aren't really any missteps here.

The fact that Reed & Caroline have managed to make such an interesting and enjoyable album using only an ancient and difficult to master modular synth system says much about their ability. Whilst the album title is literally correct, neither the Buchla nor the singing overshadow each other. Both come together in perfect harmony, producing excellent results.

Reed & Caroline's Buchla and Singing is available now on cd and download from Very Records and through all the usual digital music purveyors.