This review comes courtesy of Stephanie Koren who very kindly got in touch with me after I posted on her Depeche Mode Denver fanpage on Facebook. As you'll discover when you read this great review, Stephanie is already in love with this Depeche tour (who isn't?) and she has numerous other gigs lined up. She'll be rejoining the blog in October for the Portland show too. Thanks very much to Stephanie for the review, pictures and videos. Enjoy everyone - I guarantee that you will 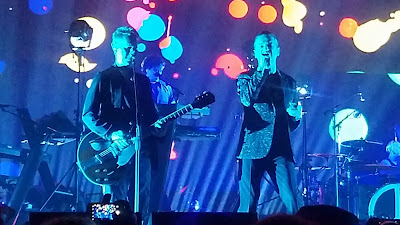 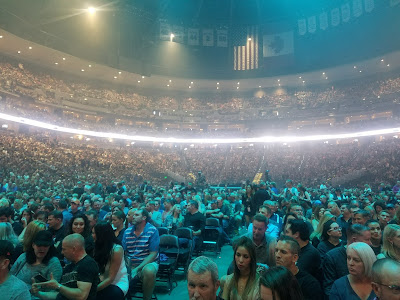 It has been two days since Depeche Mode’s return to Denver after leaving us out for the Delta Machine tour, and I am still thoroughly drunk on DM. Having attended the Salt Lake City show two days prior (right at the front!), I knew what to expect and had mostly eliminated my star struck anxiety that always accompanies me to see these guys still after all of these years. However there is something to be said for seeing your absolute favourite band in your home town. We were seated on the very right of the left section of the floor in row 6 (DM management hooked me up with these after the pre-sale shenanigans), almost directly across from Martin, exactly where we wanted to be.

And my god, they did not disappoint. As “Revolution” started and the DM feet trekked across the screen we started preparing, and Mart and Fletch, Peter and Christian walked on to loud cheers. Followed, of course, by the man, Mr. Dave Gahan, waltzing along to the start of Going Backwards. And in Heaven we were.

Somehow, the 6th row seats seemed better than being right up against the barricade in front of the stage at the Salt Lake City show. The stage at the Pepsi Center was not as tall and I was almost eye level with MLG. Swoon. The Denver crowd was much more into it than the Salt Lake crowd was, I could mostly tell by the way the band reacted and the energy throughout the stadium. It was just – different. It was like a reciprocal admiration you could feel in the air. Amazing.

Dave continued the evening with moves particularly more frisky than two nights prior. To each end of the stage he sashayed, all the while the crowd cheering him on.

At one point, as I was dancing with my hands in the air, I assume Dave spotted my rather prominent Violator rose tattoo on my wrist/inner arm and he smiled big and pointed right at me as if saying “niiiice!”. I could have died there. 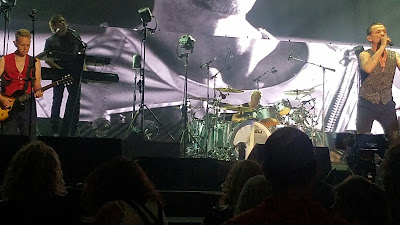 Home, as always, brought goose bumps and smiles galore from Martin as he skipped his way back to Gore side of the stage and beamed for the crowd cheering “we love you!” 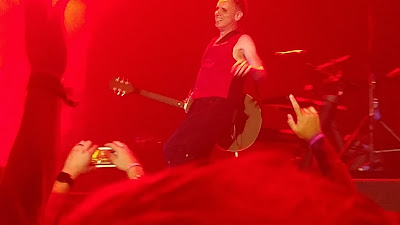 When it was time for Everything Counts it seems there was a bit of a keyboard malfunction and Martin had trouble getting the notes to play – at one time throwing his hands up halfway, but it all worked out and he got it to come back. As Dave hypnotized the crowd to sing “the grabbing hands grab all they can, everything counts in large amounts” again and again I noticed Martin, again grinning, as if wondering when we would stop and Dave would return from the catwalk. I could have gone on and on. 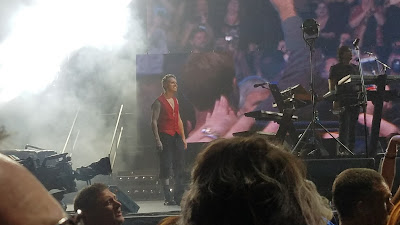 As the chords to Enjoy The Silence began I realised we were almost at encore and my heart sunk, but the crowd was electric and when the boys left the stage the cheers and lights were abundant as we awaited their return. 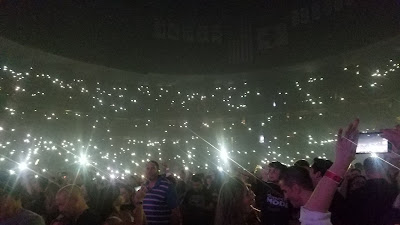 And as Martin started lulling us with Somebody we collectively melted. When he wrapped up the masterpiece with his slow “ohhhhhhh” the audience grew excited and could not hold their applause. This produced a huge grin on MLG as he bellowed the last beautiful note. Ahhhhh. 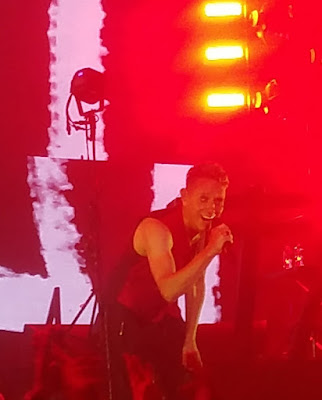 I did not see smiles like this in the previous show, another clue that the Denver audience was on their game for the boys, it had been 8 years after all.

As Dave began his tribute to the late David Bowie with “Heroes” a hush came across the audience. Perfection. 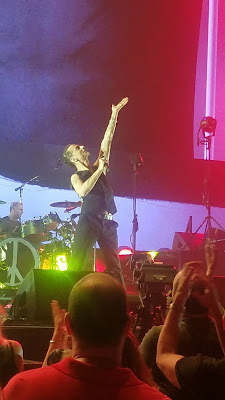 Although the set list bore no surprises, this hardcode devotee was not disappointed. They wrapped up the show with none other than Personal Jesus and we all sang out hearts out along with the boys.

As the final notes played I could have cried, but I cheered and screamed along with the entire arena. Dave exclaimed “we’ll see you next time!” and all was right in the world.

They all lingered on the stage, waving and making sure to engage each corner of the audience as the deafening cheers continued. This lasted easily three times longer here than in Salt Lake City. It was apparent that they felt the love. We definitely did too.

Until October 18 in Hollywood, and October 23 in Portland where we get to meet the band, I will be remembering this show as the best ever.

Thanks Steph! What a wonderful review.