This review sums up exactly why I started doing this project last May. I wanted to capture the essence of a Depeche Mode tour, not only so that fans could revel in reading about fellow Devotees' experiences but also so that people who aren't hardcore fans could get an idea of what following the band around for a tour means to people. Amanda Chaffeee who runs the superb And Then blog, is the perfect person to tell the type of story I want people to tell and this review is one you are all going to love. Fans of Dave - get ready to get jealous towards the end.... 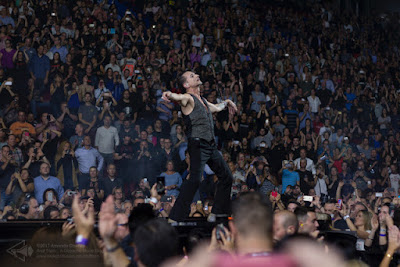 As I write this, I'm sitting on my plane, and then in a taxi, on my way to New York. Where do I even start to process such an incredible night? Montreal was my second show of the North American leg, with the same setlist as my first show in Montreal. I thought Toronto was a fantastic show, but Montreal was even better.

The VIP pre-show experience was slightly different than Toronto. Where Toronto had catered curry chicken, rice and stir fry veggies, Montreal had snacks and appetizers. Popcorn, veggie chips, sliders shrimp spring rolls, etc. available in a nice, small restaurant/bar setting. The "Spirit" photo backdrop was conveniently placed in the middle of the room for photo ops. Curiously, the bar allowed us to redeem our drink tickets for basic cocktails, instead of just wine and beer like previous VIP experiences. Score! My friends and I definitely took advantage of the rum and cokes! 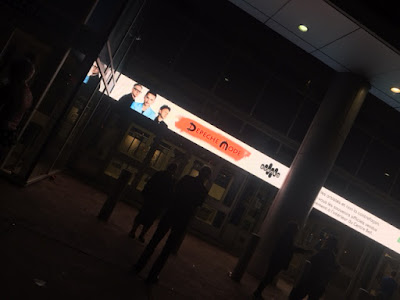 The show was packed, and security provided all the front row ticket-holders with purple wristbands – then enforced them. Anyone without one was kicked out of the area between us and our seats, so we had lots of room to dance and jump around.

When the lights went down and the band began their entrance, the sheer volume of the crowd's cheers took me a bit by surprise. This was an arena ready to party. The band, hot off the heels of an electric crowd in Toronto, was also in high spirits. Dave was in a cheerful and cheeky mood – a couple times he buzzed his hands over Martin's head as he ran by, like a child playing imaginary airplanes. He even goofed off with Fletch, bouncing around and gesturing in front of his keyboards trying to make him laugh.

For the first few songs I kept thinking just how incredibly lucky I was and amazing it was to be so close to the band. The stage was slightly lower and we had more centred seats, so there was a greater feeling of intimacy than Toronto. Of course, Dave found his favourite fans along the ranks in front row and gave them lots of love, singing select lines from Corrupt, Walking in My Shoes (WIMS) and others just to them. During the Detroit and Toronto shows, Dave picked out my friend, Tara, in the crowd and extended the mic stand as far as he could to sing the last lines of WIMS and Enjoy The Silence. He did the same in Montreal, inviting those of us next to her to share the love. We made funny faces at each other during Never Let Me Down Again (NLMDA), and there were also his classic finger points and crotch grabs, saying hello to various others in the crowd. But the focus wasn't just on us – as always, he carefully balanced his performance, making sure his energy could be felt from the front row to the very last, highest seat in the arena. 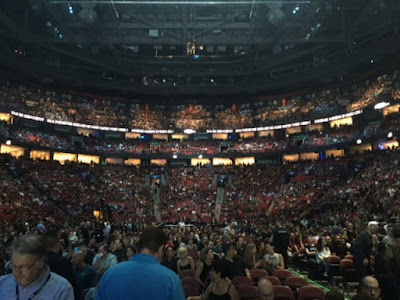 We couldn't resist the pulsing beats of So Much Love and A Pain That I'm Used To, which turned us into hyper jumping beans. Unfortunately most people in the North American crowds aren't as into jumping and dancing, so we were our own little cyclone of fun. That's not to say the crowd was tame – quite the opposite. Cheers for the opening lines of WIME we're deafening. Fans responded well to the audience participation for songs like So Much Love, Cover Me, and Poison Heart, which I wasn't sure would take off here as well as Europe.

Martin's performances were as strong as ever, with him starting out serenely in the middle of the stage, and breaking out into his hops, skips and cross-stage dashes for Home. The crowd started out quiet but quickly picked up on the sing-a-long after the song, after hearing hundreds of others. I could hear the audience singing every word of A Question Of Lust at nearly the same volume as Martin, which was impressive. 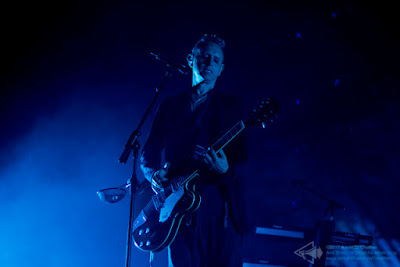 The sound was great for most of the show, but the bass in I Feel You was so low and loud that I could feel it vibrating my innards, and my arm hairs felt like they were blowing in the wind! I had to plug my ears. No idea what happened there but it was disturbingly loud.

During most of last half of the show, I was fanning myself with a paper hand fan (Dragonball Z merch, like a proper nerd) because I couldn't stop sweating. My heat tolerance has been crap for the last few months for medical reasons, and with all the dancing I was sweating like crazy. I kept thinking to myself if the band could see me, if they wondered why there was this dork in front row with a fan. Was it that hot down there? I wondered, “How funny would it be if Dave noticed and threw me his towel?" But I never thought he actually would! He swung it around over his head as he does, walking around the stage, then stopped in the center and bent back, lobbing it upward with a soft arc over the pit, right into my hands. Sweet!!

Throughout the performance, I kept returning to this feeling of gratefulness and awe, taking internal pause while my external presence was anything but. Watching this band consistently pour their souls into shows, continue to make emotionally moving music, and share themselves with an ugly and sometimes ungrateful world – 37 years of blood, sweat and tears for us. How lucky are we that we're all here to celebrate the best music in the world together? To be able to escape the hellscape of real life for just a few hours, and let all our feelings and energies out like some sort of existential exorcism? Six shows in, "Heroes" still makes me cry, and I have to fight it on Walking In My Shoes, Home, Poison Heart and Cover Me (I frequently lose). I've seen DM 28 times now over five tours, and when people ask me how I could possibly be interested in seeing the same band more than once in the same tour, this is why. While the intensity may change, that magic never goes away, and no two shows are exactly the same.

Hours after the show, a convergence of circumstances lead to us meeting Dave, but it wasn't just a random run-in... he approached us because he recognised us, especially Tara – whom he called his "singing girl” and gave a big hug. He chatted with us for a good 10-15 minutes, like we were old friends. Nobody asked for pictures and autographs – we didn't even think of it. It was just a natural, genuine conversation. He seems larger than life on stage, and at times we tend to see the members of DM as god-like. However, one to one he exuded nothing but calm and friendliness. His energy was exactly as I remember him when we met the first time, 10 years ago next month. I am so incredibly fortunate to have done either. Dave isn't just the singer of Depeche Mode to me – he's an inspiration and someone I deeply admire on a number of levels. 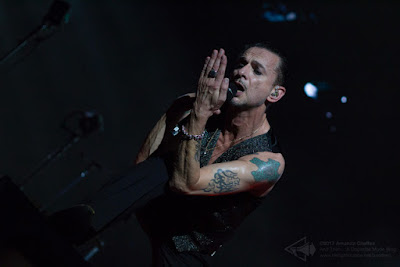 As we look on to our upcoming shows in North America, we are staring into the eye of Hurricane Irma. It will make landfall Sunday, three days before the Tampa show. There's a real threat the Florida shows may not happen, but I am still feeling incredibly grateful for the experiences I have had this tour so far, and Montreal was certainly one of the most memorable. I hope for the people of Florida that by some miracle, the hurricane damage is less than expected, and maybe they can have some reprieve with their heroes... just for one day. Stay safe out there, Floridian fans, and I hope to see you soon for a review of the Miami show!