Manchester on 17 November was my second gig in 3 days and I'm still feeling tired. I spent the day there with my mates Paul, John, John and Stuart, meaning that I was once again off reviewing duties. Claudia Schulzi is the reviewer for this show and I was delighted when she volunteered. She runs the superb My Daily Mode Blog which is a site I recommend you all check out. I think she might have been to more gigs on this tour than Depeche themselves. This is a great review - thanks to Claudia for that and all the great pictures.

It was great to meet so many people in Manchester and thanks to the many people who took Global Spirit Tour Project business cards from me and my mates who were all wearing blog t-shirts, meaning we looked like a cross between very old holiday reps and the world's worst boyband. There were so many people I didn't get to say hi too, especially Claudia. I hope to get to see everyone in Paris on Dec 3 and in Amsterdam. Anyway, to Claudia's review. 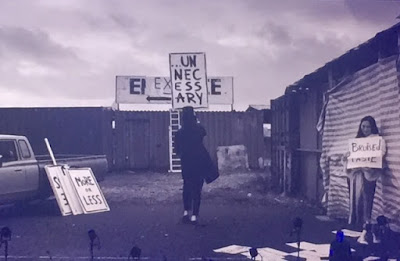 Hello everyone - my name is Claudia, I'm from Cologne and I have the great honour to write the blog about the Manchester concert here. I have my own small blog (http://mydailymodeblog.blogspot.co.uk/) and so it is very exciting for me to be part of this famous blog by David.

I arrived on Friday, November 17 by plane, in Manchester. I have been to Manchester many times , I love this small city because it is a little bit like my hometown. You can do everything by walking and as we arrived we start walking through the city. We didn't need a big sightseeing trip, so we enjoyed the city, stopped here for eat something, to drink or buy something. We met a few German fans in the city by chance, it is always the same, the German Depeche Mode devotees sometimes fall into cities like a swarm of locusts to follow our favorite band. After we checked into our room a bit later in the afternoon and got into the mood with wine, it was already time to go to the Manchester Arena, where I picked up my ticket. As we came into the standing area in the arena we have to give our ticket away and became bracelets. I hate this so much, you can get your ticket back after the show, but mostly you forget it and that's exactly how it was here again.

A woman gave us a CD in front of the entrance. As it turned out, it was a CD of the supporting band Re-TROS. I came early to see them, so I can report on them here. A Chinese band from Bejing, China, comprising 3 people, drums, keyboard and a singer with the guitar. They played a kind of punk, ska, electronic music. Not bad. I have to see them a few more times to deepen my impression. But I think I like them. A good supporting band for Depeche Mode.

We were in a big group of friends and we enjoyed some delicious beers together before the concert started. I was very excited. Almost 4 weeks ago, I saw my last 2nd leg gig in Hollywood and I was already suffering from withdrawal. With the snippet of the Beatles and at 8:45 o'clock p.m. Depeche Mode came on stage. The fans of Manchester welcomed the band with a big applause, from the beginning all fans got up. I loved the American concerts, but I was very happy to be back in good old Europe, especially in England to have a big party all together. And that it was, a huge party. I wanted to take notes for this blog, but my pen failed after the second song and now I am dependent on my memories. Not so easy with the amount of beer I drank! 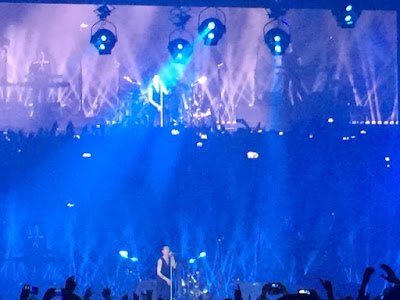 Dave was in a very good mood, sometimes I wonder how he does it. He is so lively, he has not had much time to rest after the US tour and he does not take a breather during the concert. In Going Backwards he sang "there's nothing inside" while he was lifting his jacket. Second song was It's No Good, a great ass wiggle parade of Dave. Ok, here we are, this is the winter setlist and I like the change. It is a kind of  "Ultra Setlist“ and because Ultra is one of my favorite albums I'm very happy with the new setlist. It's No Good was followed by Barrel Of A Gun with the great last lines from Grandmaster Flash. I don't know why Dave is rapping this lines, but it goes well with the song and ultimately with Dave. And he didn't loose his head, he was the master of the setlist changes. Anyone who thinks he can't pull this off, is wrong.

After the strong A Pain That I'm Used To Dave sang the wonderful Useless,  a track I heard in Hollywood concert number 4. Anton made a new short film for this song, which I didn't understand, a typical Anton video. But the new video is a sign, that this song now is surely integrated into the Winter setlist. And then, what a surprise - Precious instead of  In Your Room. A very good decision, because In Your Room slows the set down at this point and with  Precious, the mood stayed up. I never liked this song very much, but I like it when Dave rubs his sweaty back against Martin's back, looking a little tormented .... Very funny. 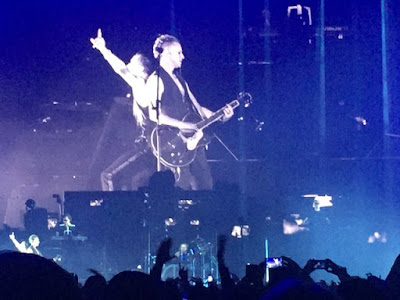 Then World In My Eyes. We were in the middle of the arena and danced and sang together with the English fans and had lots of fun all together. Cover Me, always a highlight for me, a great moment when Dave came on the catwalk to do his slowly soulful dance. I was too far away from stage and the catwalk, but I saw pictures taken by a facebook friend. Dave touched a few people in front of the catwalk and one time, he rested his hands on the head of a woman of the arena security crew. Unbelievable. I wonder why he did it  -  a penny for his thoughts. Mr. Gore sang Insight, another great song from Ultra, but I like this song so much sang by Dave. But Martin did a good job and the audience liked his performance and, as he came out on the catwalk to finish Home, the whole crowd start to sing with him: "ohohohooooo" and they sang a long while after the song ended. Dave came back and conducted the crowd.

Next - no more Poison Heart. I think that's a shame, that means they are already playing two songs fewer from the new album -  the title "Global Spirit Tour" does not fit anymore. Instead they ended up playing five songs from Ultra. But to folow they played In Your Room, which fitted very well at this point, building suspense before Where's The Revolution. For me, this wasa kind of break, not the best song for me. And then a total shock with the intro of Everything Counts. What happened to Wrong? It was canceled without replacement, why? Nevertheless,  Everything Counts was once again one of the best moments of the concert with its Kraftwerk like intro. This version of the song is so emotional and it feels like home for me. I felt like I'm in the middle of the 80's and that was a wonderful feeling.

I had a fast beer at Stripped and for the first time on this tour, on my 28th concert of this tour, I was able to float away with Enjoy The Silence and Never Let Me Down Again, as on past tours. The happiest moment of the tour so far for me. I sang and danced with my friends. One of my friends opened his braid and danced with long, open hair. I've never seen him dance like this before. We agreed that Manchester was one of the best concerts of the tour. The band went off for a while before Martin came back with the soulful Judas. After Walking In My Shoes I expected Halo, but I was disappointed. Another missing song. I hope that this will be an exception. A Question Of Time was then played instead of I Feel You. I know many people didn't like the song anymore, but it is one of my favorite songs, especially live. It is maybe the most typical Dave song with his screaming and spitting. I miss it. A Question Of Time“ is a very good song but the combination of I Feel You and the last one Personal Jesus was a perfect high-voltage build-up. But we all, Dave, Depeche Mode, Manchester and I, gave Personal Jesus our best. We rocked off until we had nothing left. A perfect tour start for me, we left the arena totally happy. The most of us went home, but my friend Heike and me, we drove by taxi to the Canal street and spent a funny beer-soaked night in a big gay pub „ Via“. We danced and sang the whole night with strangers. We rested only a few less hours in our hotel room before we took our early flight back to Cologne. 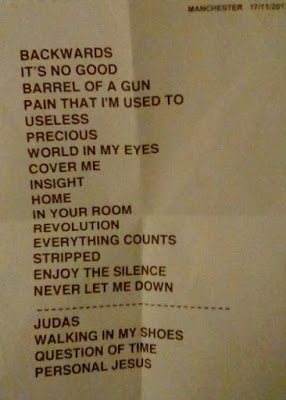 Manchester, always a pleasure. Thank you for this great concert.

Thanks very much Claudia!