Not that Depeche Mode fans are odd people or anything, but, like me, I'm sure you'll be delighted to see that this is Part 101 of the Global Spirit Tour Project. For this auspicious occasion, Polina Lipezina returns for part 1 of her 2 part end of third leg reviews. As you may recall, Polina reviewed St Petersburg in July  and, as well as Vilnius, she'll be reviewing the Moscow show for us too. Thanks very much for this and the pictures Polina and congratulations on being Part 101! 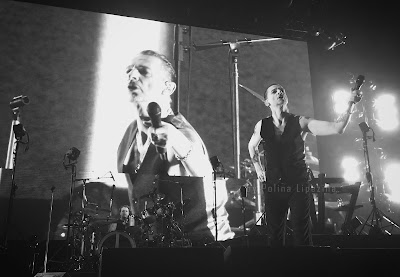 After the concert in Saint Petersburg, which to me was an exceptional one (not the best, but special) there was also Riga. It was exceptional in its way, too, since it was the first tour during which I was celebrating my birthday on the go. Very interesting experience. And here comes Vilnius - the penultimate concert of the European leg and my 16th concert of this tour. Honestly, I expected very little from Vilnius from the very beginning. But every concert is something unusual and new. And so I, as usual, am writing about my emotions. :)

The special songs of this concert for me were Going Backwards and, as is traditional, Personal Jesus. But we will talk about it later. 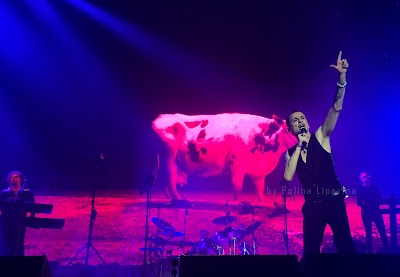 As usual in the frosty morning we stood outside the Siemens Arena in expectation. As with Riga, this concert was the first to Vilnius on the tour and I had an early entry ticket. In Riga the early tickets' organisation left me with a positive impression. What’s going to happen in Vilnius?

I will tell you for sure, that if you didn’t enjoy standing in the queues in summer, you definitely haven’t stood there at -15 degrees! It’s horrible! It’s hard! It’s exhausting! Is Depeche Mode worth it? Absolutely!

Having suffered in the cold, at 17.30 we entered the arena. As part of the early entry merchandise specials, we received a tourbook, a silicone bracelet and a familiar laminate all packaged into a cellophane. Probably selling leftovers?

It was however great to be out of the cold!

To sum up, the entrance to the arena was a little worse than in Riga, but not bad overall. For the first time it was pretty decent.

However, enough about small details… Warmup! Yes, I like this warmup! Douglas –  straight from the Dave Dancing School! It seems the closer the tour gets to the last Black Line performance in Moscow, the more he digs it! 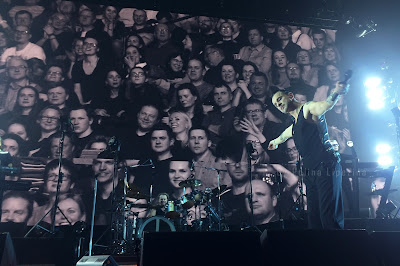 Before I begin my description of the most important concert, I really need to point out that in the winter part of the tour I  wanted to see a lot of Dave on stage… Sorry guys, I just can’t help it! :)

So what so special happened in Vilnius? Going Backwards –  it felt like my song for the first time, thank you Dave that you sang it for me. By the way, don't you just love those emotions you feel when Dave notices you amongst the others? I do. It was amusing. During the whole Delta Machine tour I wanted to get a high-five, but because of the short arms I couldn’t reach out… But at one of the concerts he reached out personally to me. Anything can happen, you just need to believe. :)

Alright, let’s go back to Vilnius.

The main specialty of the concert was Barrel Of A Gun. It was the first time I saw Dave so angry… One time he stood up on the stage, crossed his arms behind the back, seemingly looking ahead of him, but he was looking at one of the photographers and then his loud “Fuck you!” boomed across with a gesture saying “get the hell out of here”. Incredible! Was it real? But then, literally a minute after Dave stepped over the loudspeakers that were right in front of him and waved at the same photographer. If only you could see that! At the very end he moved angrily something on stage with his foot… I don’t know what it was, but it looked just as frightening as it was interesting. You can see it here:

However, it went on just fine: Dave was smiling, was doing his dance moves and was the same usual Dave who we all are used to.

In Riga Dave couldn’t sing Personal Jesus without making mistakes. But in Vilnius it was splendid.

Regarding the audience, I had a feeling that people could  bea little bit louder. Then again, I myself acted pretty lazily the entire concert, for some reason I only wanted to watch the show. It’s hard to say what the reason was. Maybe Dave’s mood affected that? During A Question Of Time when we need to sing along, Dave was extending his hand with the microphone to the audience, and waited, listened, in the end he gave up, implying that we sang really poorly… And I pretty much agree with him.

I can’t say that I didn’t like the concert, but it was lacking some fire, dear Lithuanians. But I suppose, next time it will be great. :) 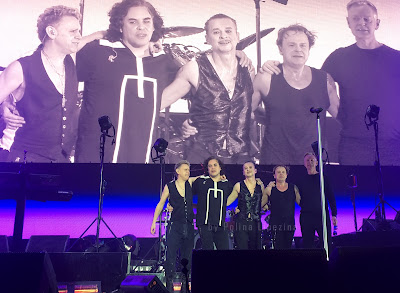