NEW SOUNDS ALL AROUND - THE DEPECHE MODE 12" SINGLES BOXSETS

Each boxset is a numbered limited edition housed in a cardboard outer box featuring a reinterpretation of the album cover, or at least a key element of the album cover. The Speak & Spell cover is nice, but the A Broken Frame is a bit bland. Recreating that album's iconic cover would no doubt be tricky but, had I been asked, I'd have suggested that the inner sleeve of the album featuring the cover of the boxset plus a sickle, would be been better. I wasn't asked though so who cares? The covers of the 12" singles are reproductions of the originals which, at least in terms of New Life, keen eyed fans have noticed apparent differences in colour between the old and the new. I've not done this so I can't tell you what differences I see between the singles I have.

The cost of the boxsets comes in anywhere from £40 to £50 or so depending on where you shop. That's a lot of money obviously and, the odd surprise aside both here and in future boxsets, given that everything on here is available in the 12" format already, are these essential purchases? On balance probably not, but if you're a collector like I am, they are very nice additions to the seemingly never ending pile of Depeche Mode records filling every space in your house.

Sound wise, a large amount of work has gone into these releases by depechemode.com webmaster Daniel Barassi and the results are excellent. He has taken a lot of time getting the balance right (lol etc) on the sonic side of things as you can see from the hints that he has dropped on his Fishure Price Instagram account. The 12" singles are reproduced from the original master tapes and are designed to sound identical to the original vinyl. Again, that might not seem like a selling point to some and that's perfectly understandable given the cost of the boxes.

The Speak & Spell boxset is noteworthy because it contains Dreaming Of Me on 12" for the first time ever. It's nice to have that particular gap filled and any release that contains the majestic Ice Machine is impossible not to love. The New Life and Just Can't Get Enough 12" singles contain, the same tracks the original 12" singles : New Life (remix) (decent), Shout! (Rio Mix) (not only a quality piece of punnery but also a titanic remix), Just Can't Get Enough (Schizo Mix) (A glorious homage to Kraftwerk remix) and Any Second Now (Altered) (one of those really odd instrumentals the band did in the old days that you can't help but enjoy).

There are two bonus items. Firstly, we have a reproduction of a promotional poster from the era which is fine as posters go. Secondly, and rather superbly, we also have a reproduction of the Flexipop magazine flexidisc which was originally released in September 1981. That flexidisc features two tracks: the superb King Of The Flies by the superb Fad Gadget and Sometimes I Wish I Was Dead by Depeche, a differently named and different take on the Speak & Spell album track I Sometimes Wish I Was Dead. Sometimes I Wish I Was Dead is an excellent version of the song, slightly improving on what is already on of the great early Depeche Mode tracks. Finally on the flexidisc point, because I am the sort of person that does this sort of thing, I've compared the reissue to the original and can confirm that the reissue is slightly heavier. Not in tone or sound but in weight. I have no idea why I felt I needed to share that with you.

Here's the cover of the original magazine featuring a young Dave, no doubt in the coffin because the photographer thought that was an amusing thing given the song on the flexidisc.

As with all the other boxsets to come, this one and the A Broken Frame one come with digital downloads. You get a card inside the box that, in the U.K. at least, gives you a code to use on wearevinyl.com. With the Speak & Spell boxset, you get a digital version of Sometimes I Wish I Was Dead  which is rather nice as that's not been available before. The Fad Gadget track is not available with the downloads however.

Finally on the Speak & Spell side of things, Sony asked 5 fans to get involved with the release by making their own unboxing videos. Along with Dicken Schrader, Michael Russell, Cristian Guttierez and Sylwia Gorajek, I was asked to take part which was naturally something I was really pleased to do. Too pleased almost as you can tell from the rather childlike was I react to things in the video.


The A Broken Frame 12" boxset


Like the Speak & Spell boxset, this one contains three 12" singles with an identical track listing to their original issues. First up we have the pure pop of See You in its Extended Version which is not that extended at all really. It has Now, This Is Fun on the b-side, again as the Extended Version. I do enjoy that track and the band played it live 79 times in 1982 and 1983 so they must have loved it too. As you can see from the photo of the master tape the band's Facebook page shared the other day, it originally had a different name - Reason For Fun 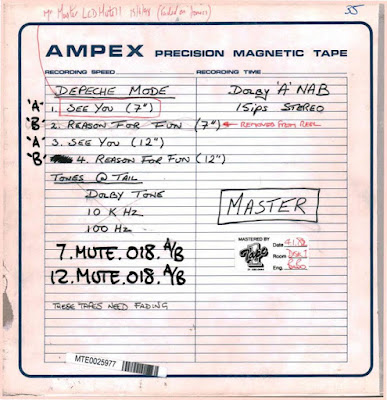 In fact, in the January 21st 1982 edition of U.K. pop magazine Smash Hits, Fletch said the b-side was called something else:

"After ‘New Life’," Andy takes over, "a lot of people thought Depeche Mode were ‘sweet’ and ‘cute’ and everything, and we wanted to show them we could be a lot of other things as well. On the new B-side, "Reason To Be", we tried to …" pause while they all burst out laughing again … "we tried to sound … really…mean! Didn’t work though," he admits.

Not that "mean" really.

Talking of mean, harsh sounding, Nine Inch Nails influencing industrial goth pop, the next 12" we find is The Meaning Of Love.  The band's weakest single of that and any other era until Hole To Feed came out (I will never let that go), the 12" features the Fairly Odd Mix of the track which lives up to its name. It's backed with a genuine titan of the Depeche b-side catalogue however with the Bowie Low era like electronic genius of Oberkorn (It's A Small Town) (Development Mix). An unmissable gem in the band's early releases that was recorded before it even had a name as another picture from the band's Facebook page recently showed us. 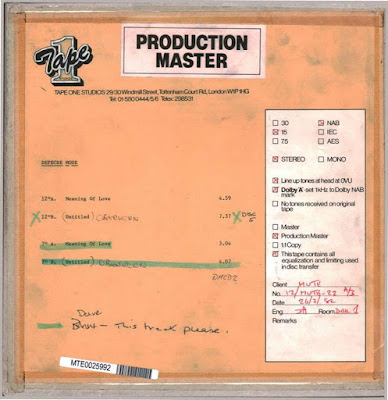 On the music side, the final piece of the A Broken Frame jigsaw is of course BONG1 itself, Leave In Silence with the 12" reproduced in its original textured sleeve form which is a nice touch. Leave In Silence  is a masterpiece of a song and I will not hear anything to the contrary from anyone. The Longer version we find on track one of the 12" only confirms that I am right and the Quieter version on Track 3 doesn't alter that at all. Sandwiched in between we find Further Excerpts From: My Secret Garden which is fine if you like that sort of thing. Oh, and did you know that Leave In Silence was originally called The Big Drop? Depeche Mode's Facebook page again pleasing people who are pleased by this sort of thing (you and me basically) by producing yet another master tape picture: 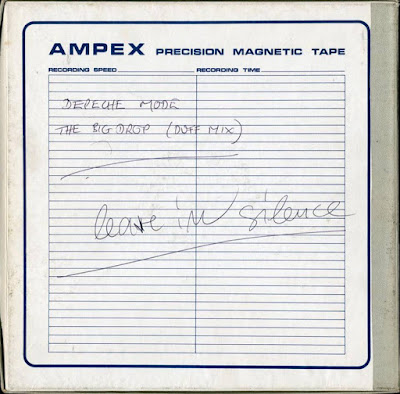 I bet even the Duff Mix was glorious.

Finally, there's a reproduction of a See You promo poster inside the box.

There was an unboxing video too and one of the five participants was friend of this blog, all round good guy, Mr Breathing In Fumes himself, Glen Hammarstrom. See Glen and his wall of vinyl below:

That then is a run through of the Depeche Mode 12" boxsets. These first two give a taste of what is to come and it will be interesting to see how future releases appear. The Violator era one for example has 9 12" singles to look at. Will the L12BONG20 appear in a gel sleeve? Will we get the Hazchemix Edit of Dangerous which appeared on the gatefold 7" of Personal Jesus? Will the Songs Of Faith And Devotion 12" boxset finally see the prices of the original 12" singles drop to something less than the price of a small car? Will we get vinyl releases of any of the American only mixes such as the Black & Blue Mix of Master & Servant?

Who knows? Well Sony probably, but I don't. I am intrigued to see how these issues are dealt with and what the price of future boxsets will be given the content they surely have to have as a minimum i.e. all the 12" singles from that album. We can judge them as we get to them. What the series will show, especially as we get up to the end of the Music For The Masses era is just how influential Depeche Mode were on the 12" single remix and that is something that should rightly be celebrated.  These two boxes are a fine way to start that off.