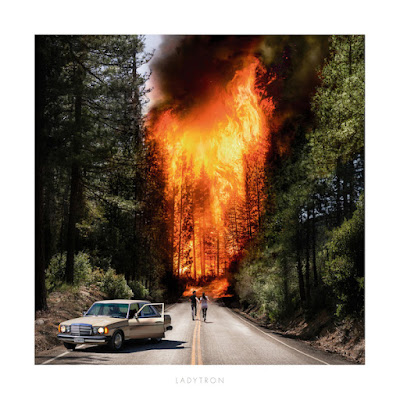 One of the finest pieces of music news I got in 2018 (other than confirmation that the Depeche Mode tour was finally ending meaning I could put the Global Spirit Tour Project to bed and reclaim my life) was that Ladytron were coming back. For reasons I've never been able to understand, Ladytron have never been given the recognition their immense back catalogue deserves - if this album doesn't put that right, I'm officially giving up on holding out any hope for the public's taste in music.

Since 2011's Gravity The Seducer, the members of the band have been off doing their own thing. Helen Marnie's two solo albums Crystal World and Strange Words And Weird Wars were two exceptional albums much loved by this blog, both of which moved away from the dark electronics of Ladytron into a poppier area. On Ladytron, this poppier, lighter feel combines wonderfully with the band's trademark sound, producing an album rich in quality and bursting with wonderful tunes.

Opener Until The Fire opens the album perfectly with a real statement of intent, leading into the already released The Island. Both The Island and The Animals were issued last year to rightful acclaim, but when you hear them as part of the album, they sound bigger and even better. They, and indeed the whole of this album, seem to suggest that Ladytron have found a new level of confidence, making them sound better than they ever have done. When you compare this album to Chvrches sadly forgettable third album, there is a marked difference.

It no doubt seems over the top to say this, but it's very hard to pick one highlight out from this album because the whole thing is excellent. It's not too often a 13 track album will hold the listener's attention its full duration, but Ladytron manages this effortlessly. Tower Of Glass is a stunning track which, like the album's penultimate track The Mountain, brings to mind Helen Marnie's solo work.  The blazing electronics in Paper Highways are just superb and Mira's lead vocal on the track is sublime. A Mira track is always welcome. At the band's comeback show in Glasgow last year, Black Cat was a standout as it always is. If the band tour this album (and let's hope they do), Paper Highways will doubtless be a similar highlight.

Even though the job of a review is to review the album in some depth, I'm going to ignore that and just once again say that this album is excellent. You really do have to listen to it. Ladytron have been away far too long and not many bands come back after such a break with the same magic they previously had. Ladytron have not only come back impressively, but they've come back sounding bigger and better than they ever have done. Ladytron is an album you really don't want to miss.

Ladytron by Ladytron is out on 15 February on !K7. Find out more at https://www.pledgemusic.com/projects/ladytron
Posted by DJM at 15:32