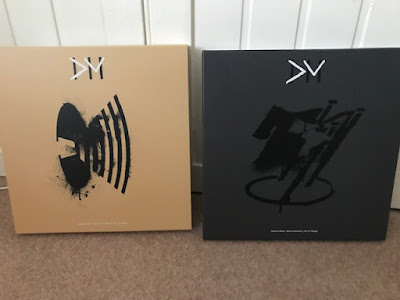 Thus far, the Depeche Mode 12" reissue series has been a great thing. The amount of care that has gone into every element has been incredible from Daniel Barassi's impressive work on the audio side of things to the faithful reproduction of the artwork. As we'll see in a while, an extra level of attention to detail has been paid in the Black Celebration boxset which, for people like me, is an absolute joy. There is a problem with the Black Celebration boxset however - it's not complete.

If the purpose of this reissue series is to rightly celebrate Depeche Mode's role as one of the first great innovators in 12" remixing, then the omission of the 12" singles for Shake The Disease and It's Called A Heart is a calamitous oversight that undermines the entire project. "Ah, but they're non album singles," the record company might say. "Neither of them featured on Black Celebration." That is of course true, however, if that is the argument, let's open up the Construction Time Again boxset and take a peek at the two 12" singles in there for Get The Balance Right.  What's odd about them? That's right. It's a single that did not feature on that album. The same point could easily be made about Dreaming Of Me's inclusion in the Speak & Spell boxset.  So the non album singles thing is very much a non starter.

Get The Balance Right is correctly tied into Construction Time Again because it was an important bridge between that album and A Broken Frame. It also features a hugely influential 12" remix and this whole project's purpose is a celebration of that format. Dreaming Of Me is of course very much tied to the Speak & Spell era so, again, its inclusion in that box made sense. For the same reasons then, Shake The Disease and It's Called A Heart surely have to feature here don't they? Shake The Disease is another hugely important Depeche single. As well as being nothing more than one of the most beautiful songs Martin has written, it also ended the band's pop phase and led us in to the dark, leather clad Berlin hammer wielding world  of Black Celebration. It is the very point that Depeche Mode became that thing that we all love. in 1985, two 12" singles were released. It is illogical to ignore them here. Similarly, It's Called A Heart's three 12" singles (the standard and double pack) should also feature here albeit that is only for reasons of logic and not of dark majesty.

Basically, the omission of Shake The Disease and It's Called A Heart is a cock-up of epic proportions. And with that, we move to the boxsets. 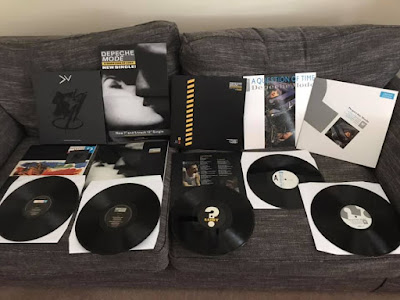 I'm not even going to attempt objectivity here - this boxset is a thing of quite staggering beauty. There is so much to love about this collection of singles and there are several fan pleasing highlights. For example, the cover of Stripped is embossed, just like the original issue of the record. That's superb. Also, the Limited Edition 12" of A Question Of Time features the Limited Edition sticker on the front, again just like the original issue. It would have been incredibly easy to simply have the words Limited Edition printed on the sleeve as happened with later pressings of the original 12", but the care taken in making these boxsets has extended even to these small details and that is a wonderful thing.

There is one real treat here and, for me, it's the highlight of the series so far. In 1986, A Question Of Lust was released on 7", 12" and a limited edition cassette single. That cassette singles came in a cardboard package and as the sleeve promised, contained a cassette, a badge and a booklet. Here it is both opened and unopened: 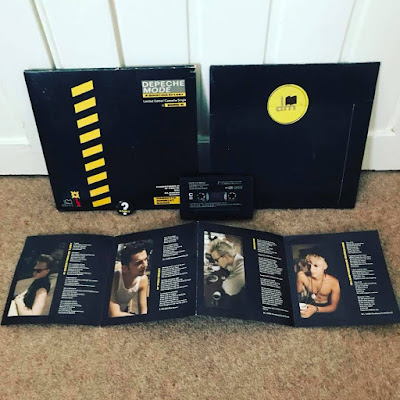 The ever resourceful West German label Intercord went one better, releasing a vinyl version of the cassette single in two versions - black vinyl and yellow vinyl. It only contained the booklet however. There was no badge. 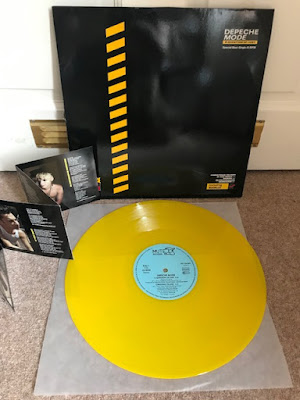 It is therefore wonderful to find this version released on 12" for the first time ever in Britain contained within the new boxset. The attention to detail show in the packaging of it is exquisite. Here's the sleeve: 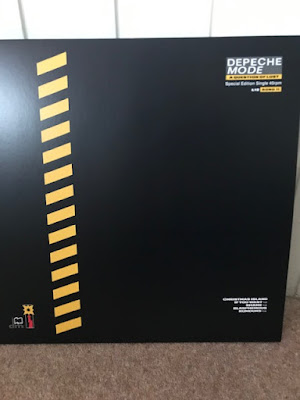 Firstly, the badge has been incorporated into the package as it has been used as the label on the b-side of the record. 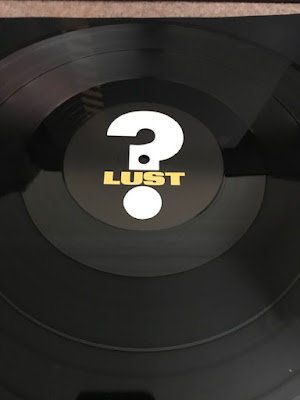 How cool is that? I know that it's probably wrong to get excited about things like this, but I make no apologies for it. The booklet is also here but not as a booklet. Instead, quite brilliantly, it has become the inner sleeve. 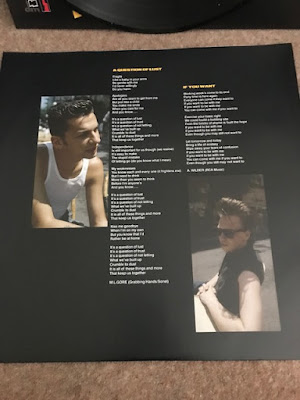 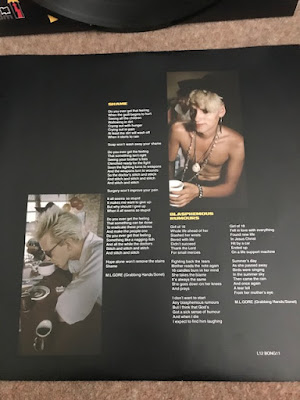 It's genius. A masterpiece of repackaging and attention to detail of a level far higher than I could have expected. Beautiful, beautiful work.

The records also feature remixes, b-sides and a couple of live tracks, but you all know them by now and there's no point in me droning on about them. All I will say is that the Stripped 12" is one of the greatest 12" singles released by anyone ever at any time on earth and a record collection without that record in it is being treated very shabbily indeed. The final point to note is the inclusion of a reproduction of the A Question Of Lust promotional poster.

Overall then, despite the ridiculous Shake The Disease/It's Called A Heart situation, this is the best boxset of the lot so far.

Music For The Masses - The 12" Singles Boxset 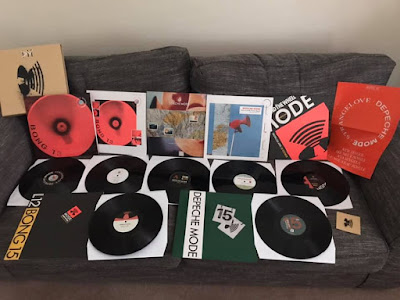 Just look at that. This collection of 12" singles was already a thing of beauty in its original format - the reissue has polished them up and turned them out splendidly. All the classics are there - Strangelove's orange loud speaker, Never Let Me Down Again's maps and speakers and Behind The Wheel's gorgeous matt sleeves, all sparse and ominous. If you want to get right into Depeche Mode dullard's corner, the labels are simply perfect. I mean, just look at this: 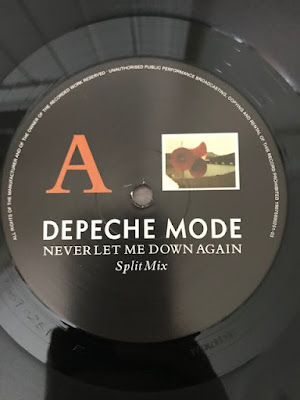 Perfection itself. It also helps that the towering megabeast that is the Split Mix is there too. God, Depeche Mode really were incredible back then.

The addition of the Little 15 12" is a nice touch. Even though it was not really released as a single in Britain (well, it wasn't promoted at all), the French label released it, as did a few other countries in Europe, causing it to sell well on import here. From the point of view of making this series a comprehensive celebration of Depeche Mode's 12" history, it is only right that Little 15 features here. 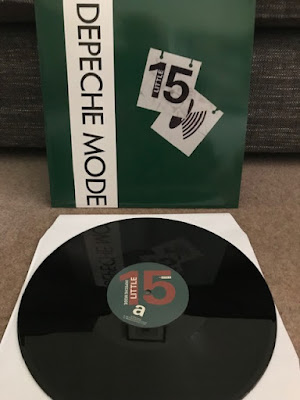 There's also a Strangelove poster reproduction which is cool.

As with the Black Celebration boxset and indeed the four previous boxsets, this is another gorgeous package, lovingly put together and both boxsets featured in this review are a real treat. Yes they're expensive and, yes they contain something that most of us already have in many different formats, but as a celebration of Depeche Mode at a crucial period in their career, they are fantastic.

If only they'd given some thought to what they haven't put into them....

Email ThisBlogThis!Share to TwitterShare to FacebookShare to Pinterest
Labels: 12" Boxsets, A Question Of Lust, Black Celebration, Depeche Mode, It's Called A Heart, music, Music For The Masses, Shake The Disease, Strangelove, vinyl