GET SPRITE WITH TREE: DEPECHE MODE - SPIRITS IN THE FOREST 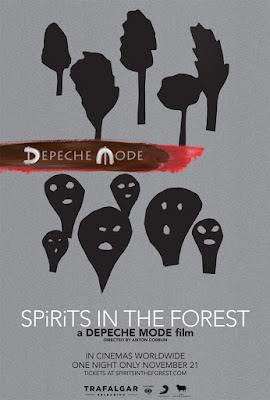 On Wednesday this week, the internet rumour mill began muttering about the long awaited Global Spirit Tour film with a website called spiritsintheforest.com popping up alongside a couple of reports talking about the new Depeche film. Yesterday, those rumours were confirmed and so we now have a new Depeche Mode film to look forward to. Well, some of us  do anyway; as ever there are plenty of fans upset about something they've not yet seen.

The film promises to capture "the energy and spectacle of the band’s performance from the tour along with a deeper look into how their music and shows have been woven into the fabric of their fans’ lives."  As well as the band's two performances at the Waldbuhne, the film follows the adventures of six Depeche fans, all of whom were involved in the band's Facebook takeover. The press release says:

"Through the deeply emotional stories of six special Depeche Mode fans, the film shows not only how and why the band’s popularity and relevance has continued to grow over the course of their career, but provides a unique look into music’s incredible power to build communities, enable people to overcome adversity, and create connections across the boundaries of language, location, gender, age, and circumstance."

Curiously, the press release also says that the film is "expertly edited." You'd take that as being a given really wouldn't you? It would be odd if it claimed that the film was "poorly edited."

When I was in Berlin for the Waldbuhne gigs, I had a chat with one of the 6 fans who are featured. From that it would seem that this is not going to be 101 part 2, but instead is going to focus more on the fans' lives in the period leading up to and including the Berlin gigs. Given that many of us travelled from all over the world to attend the concerts, you can see why this angle has been approached. If nothing else, it gives us a new angle on the DM live dvd and it's interesting to see them..wait for it...branch out. Sorry.

Will I watch it? Of course. I'm waiting to see what cinema gets it in Scotland of course and if none take it, I'll wait until it's given a physical release. There have been a number of mentions of Netflix being involved but nothing has been confirmed yet. Presumably we will also get a physical release and it would of course be wonderful if both Waldbuhne gigs were part of that package. All of that is yet to be announced however.

Naturally, the reaction among the notoriously patient and in no way at all pre-judgemental fanbase has been split into the usual three categories:

(a) "I LOVE DM FOREVER THIS IS THE BEST THING WE WILL EVER SEE"
(b) "Typical late period half arsed Corbijn bollocks that could have been painted by a blind dog what's the point it's a joke remember Violator? Where's Alan"
(c) "Oh right cool. I'll watch it"

I'm in the (c) category although I must say that the artwork is quite dreadful. It looks like a bunch of angry golf clubs have escaped their golf bag and are charging the Depeche stage screaming about setlist variation and Dave's dancing. The title is quite dreadful too, but there is a logic to it.

So now we wait. There will no doubt be more information released as November 21st approaches and I'll write about that as and when it surfaces. For now however, let the speculation begin. Exactly how will the Global Spirit Tour come across when given the live dvd tree-tment? Will we exit the cinemas full of joy or will we leaf in silence?

No more tree jokes. I promise.