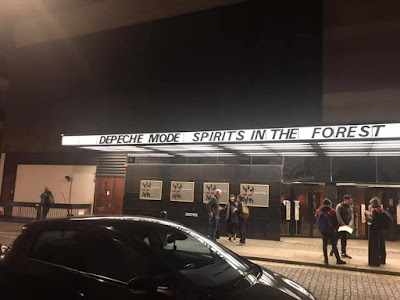 Ahead of its release on 21 November, last night the Curzon Mayfair in London hosted a preview of the film followed by a Q&A with its director Anton Corbijn. Thanks to my Halo co-author Kevin May I was able to attend and I have to say that I really enjoyed the film. It's not a Depeche Mode concert film by any stretch of the imagination, in fact it's barely a Depeche Mode film at all. This is something very different for Depeche Mode.

As well as being there with the ultimate aim of writing this reveiw, I was also there on duty for Home because I was interviewing two of the fans who star in the film, Daniel Cassus and Cristian Flueraru. I had a very interesting chat with both of them which remains under wraps until it features on Home.

To the film then. If you are expecting to go along and see 90 minutes of live footage, you're going to be disappointed. The two Waldbuhne gigs in Berlin are the film's focal point certainly, but only in the sense that the fans' stories are told in the lead up to the gigs, with all six finally meeting up in Berlin. The gigs are more a backdrop than anything else. What we get instead is a very enjoyable and, in parts, moving film that highlights just how much of a role Depeche Mode play in people's lives. We all have our own similar stories about when we first fell in love with the band and how their music resonates throughout events in our lives, but if we tried to tell that tale ourselves, we'd quickly bore everyone around us - I can speak from personal experience there.

The film thankfully avoids that trap. The fans' stories are intriguingly told, interweaving as they approach Berlin where we see them all together enjoying the last two shows of the Global Spirit Tour. I enjoyed each story and the approach of letting the fans tell the tale rather than relying on the band's live performance is a bold move but one that works. The film is almost more of a documentary in places. I won't reveal any of the stories as you'll want to see them yourself. This isn't 101 part 2 either. It's much more personal. Contemplative rather than a month long bus party.

There is of course no Depeche Mode film without Depeche Mode and footage from both Waldbuhne gigs pops up throughout the film. As I mentioned above, this isn't a concert film and I was initially surprised at how little Depeche we saw. As the film progresses however, you notice that less and less. What footage there is serves as a reminder of how good those gigs were. There isn't actually a full song in the film - instead we have excerpts of songs, some longer than others. The live footage is shot in a very un Anton way too. We see the band in all their ragged glory, close up and personal and, for a DM/Anton film, unusally intimately.

I was very surprised by the film, but pleasantly so. To try and tell the tale of how a band can dominate an individual's life is difficult as every fan has different reasons for loving that band, but Spirits In The Forest does that and does it very well indeed. I'm genuinely looking forward to seeing it again in a few weeeks' time. 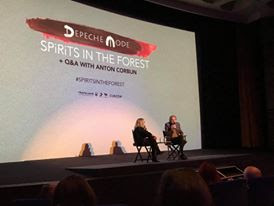 After the film, Edith Bowman hosted a Q&A with Anton. He discussed the film generally, commenting that Depeche Mode's fans had a unique attachment to the band - "I work a lot with U2 and I don't see it happening there."  He confirmed that the concert would get a full physical release next year although, interestingly, only the Wednesday night show was filmed in full. Anton confirmed that they had "filmed a few things on the Monday" but not the whole gig. There was no suggestion of a release date however.

Away from Spirits In The Forest, he confirmed that his "substantial" Depeche Mode book will be out in a year or so.