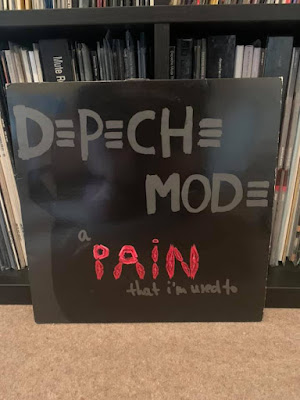 Playing The Angel's release on 14th October 2005 saw Depeche Mode gain near universal praise for what remains their post Violator highpoint (sit down Lilian - I am not talking to you here) and its opening track was an impressive, powerful start to the album.
That song, A Pain That I'm Used To, was picked as the second single from the album and it was not much of a success in the UK.
We also got another B-Side, another picture disc and the usual amount of promos, CD-Rs and digital downloads.  Here is the story of that single.
I'M NOT SURE WHAT I'M LOOKING FOR - A PAIN THAT I'M USED TO
The Single 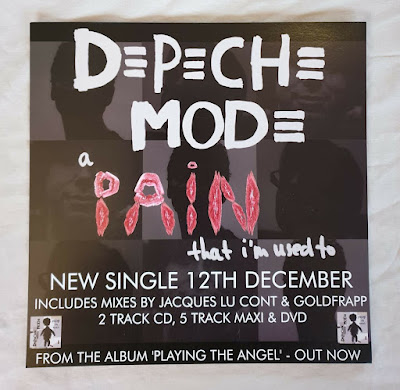 A Pain That I'm Used To, BONG36, appeared like an early Christmas present on 12th December 2005. Could Depeche Mode get the Christmas Number 1? Well, obviously not, but the single performed pretty well given that the album it called home was already out.
There weren't that many reviews of the single and the song was barely mentioned in the album reviews either. Some people picked up on it however. Stylus Magazine said:
A Pain That I’m Used To is...thrashing with fire and noise amidst crunching vocal hooks, symbolising the start of something special"
In Mixmag, Ralph Moore said:
"The opening triple salvo of "A Pain That I'm Used To", "John The Revelator" and "Suffer Well" is a musical call to arms not heard since "Violator""
Pitchfork called the song "a slow industrialist grind" which is odd in a way but sort of accurate in another.
You may recall that the band appeared on Top Of The Pops when promoting Precious? Well that performance was actually recorded in Cologne on 8th September 2005 when they also played A Pain That I'm Used To which you can see above. I remember this performance was leaked online meaning you could hear A Pain That I'm Used To before Playing The Angel came out if you set aside two days to download it on your Wanadoo 1mb broadband.
Unlike Precious, this performance didn't feature on the UK show and there was very little promotion of the single. As a result, it smashed into the Top 40 at 15, fell to 46, 88 and finally 93. Not a great showing really given the song's quality.
A Pain That I'm Used To has been played live 368 times since its release with the Jacques Lu Cont Remix forming the basis of the live track on the last two tours to good effect. For fans of the Peter Gordeno bass face, it's a moment of real joy. It wasn't played live on Tour Of The Universe where classics like Hole To Feed took the place of enjoyable songs.
We had a B-Side again and it's another cracker. Newborn is a properly loud, electronic sounding Depeche Mode track and it is a joy. As with Free, it could surely have found a place on Playing The Angel as its addition would only have improved the album. Also like Free, Newborn has never been played live. We live in a world where nonsense like In Sympathy and Peace have polluted set lists (albeit 2 and 22 times respectively) yet songs like this remain in the vault marked "Do Not Play Live." A shame.
The Video
For reasons best known to the band only, Uwe Flade was invited back to have another crack at the video after the car crashes that were Enjoy The Silence (Reinterpreted) and Precious. Perhaps the band hadn't actually watched them, who knows? Anyway, he literally went for a crash this time round.
To alleviate boredom on tour, the band decided to hold a series of motor races called the Depeche Mode Derby. The winner of each race got to be Fletch's banana roadie for the tour's first gig.  124 races were planned for Touring The Angel with a rehearsal one outside Paris taking place over the 13th and 14th of September 2005.. It was the only one that was filmed and sadly, it was filmed by Uwe Flade.
We open with the cars revving up as each keen driver climbs into their vehicle keen to land the banana carrying prize. The three band members wander between the cars and then with a wave of a flag/Dave's arm, they're off! To motivate the Fletch mad drivers, the band plus Christian who somehow got there unnoticed and, let's not forget, isn't a band member anyway, crack on with A Pain That I'm Used To. Dave does stage Dave, Fletch fletches and Martin, well Martin looks a little tired and emotional after a sherry or two too many the night before.
The first two verses pass by as the cars race along and then - boom - the chorus arrives and the gloves are off as the cars started ramming each other in a banana driven frenzy. It gets tasty now such is the clamour for a even a chance at being Fletch's banana person. There's a needless slow-mo shot of a car crash and then a fight. Who would have thought people would take the chance at the winner's prize this seriously?
Suddenly we are done. The song ends as the race concludes and the winner leaves her car knowing that she is the special one. She was flown first class to Tampa to undergo extensive banana carrying training so that Fletch would get all the potassium he needed to get him through the gig. Sadly, the Depeche Mode Derby had to be dropped when 16,000 German fans applied for entry before the gig in Dresden on 13th January 2006. The qualifying alone would have led to the rest of the tour being postponed.
Poor Fletch had to handle his own banana for the rest of the tour.
The Formats

Around this time, the singles stopped being released in individual European countries and were instead given Europe wide releases with various promos popping up locally. There was also no physical release in the US so there is not the usual large number of formats to contend with. There are plenty to look at though, don't worry about that. 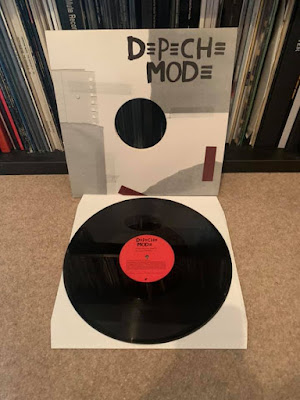 P12BONG36 is the first promo and it comes in the same type of sleeve the Precious promos did. It features the same two tracks as 12BONG36. On the A-Side, there is the excellent Jacques Lu Cont Remix. Decent remixes are thin on the ground for this single so this is a real joy. 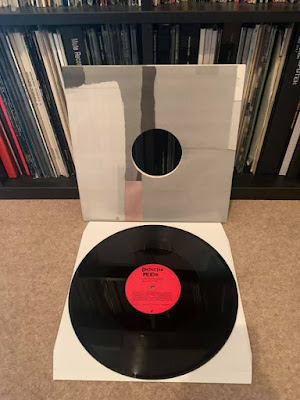 The AA-Side has the Jacques Lu Cont Dub version of A Pain That I'm Used To. It's decent enough. 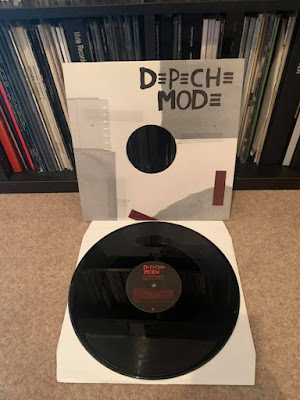 PL12BONG36 has two more remixes of A Pain That I'm Used To on it. Side A features the Bitstream Threshold Mix, no doubt so called because listening to it pushes you to the threshold of a migraine. 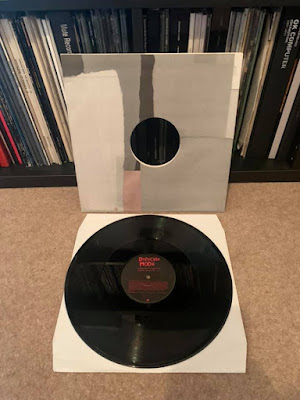 Side AA has the Bitstream Spansule Mix which is really not good at all. 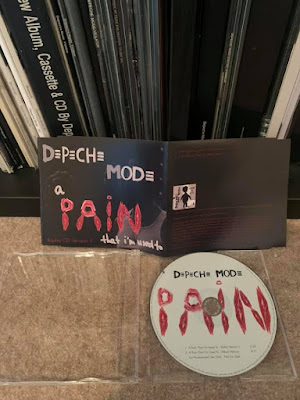 There are three promo CDs if that's your sort of thing. The first, RCDBONG36, is called Radio CD Version 1 on the sleeve. It features two versions of the single - Radio Version 1 and Album Version. As you will note on this and all subsequent formats, the lips forming the word PAIN thing is just wrong. For fans of errors, the spine of the CD says RCDBONG35 not RCDBONG36. Madness. It reminds me of this frankly genius Fry & Laurie sketch if you'll forgive the diversion:
Sorry about that. 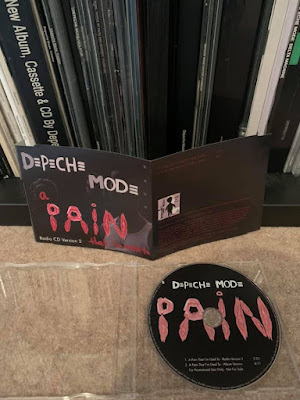 The second promo CD, Radio CD Version 2 a.k.a RLCDBONG36 features the Album Version of A Pain That I'm Used To and Radio Version 2 which is a more electronic take on the song and more interesting than Radio Version 1. Hilariously. the spine error repeats itself here as the spine says RLCDBONG35 and not RLCDBONG36. Crazy. 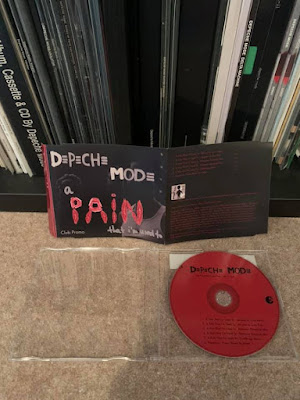 The third and final promo CD is the "Club Promo" PCDBONG36,  It contains the four remixes from the two promo 12" singles plus the ace Goldfrapp Remix and the ok Newborn (Foster Remix by Kettel). Once again we have the 35/36 mix up on the spine. Fire everyone involved immediately. 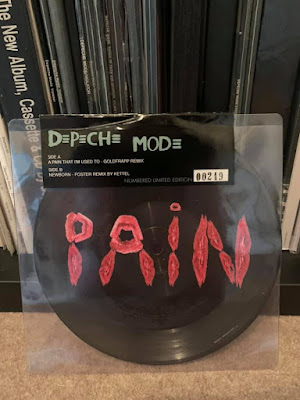 In a move that set the Depmod hordes on a war footing (see Precious blog), a 7" picture disc was released. It's a beauty, the odd lip thing notwithstanding. On the A-Side (above), we have A Pain That I'm Used To (Goldfrapp Remix). The singles comes in a sealed, numbered plastic sleeve. 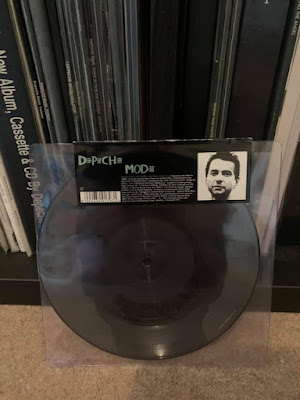 The B-side has Newborn (Foster Remix by Kettel) on it. There is also a silhouette of Dave on the record with a handy hint as to who it is on the label. 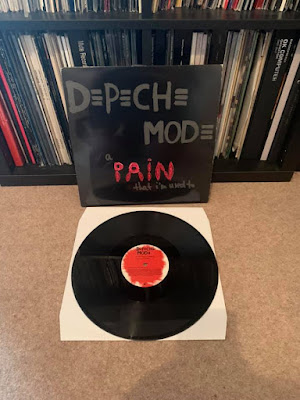 The star of 12BONG36 is Fletch. He is there on the cover all shady and moody. The album cover star Mr Feathers appears on the label. This record has the same tracks as P12BONG36. 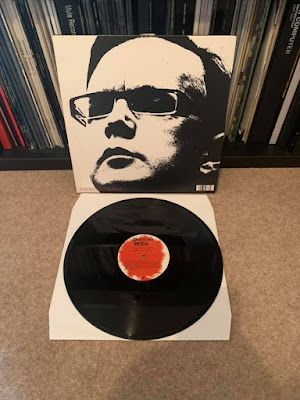 The rear of the sleeve is one for Fletch fans i.e. every single one of us. 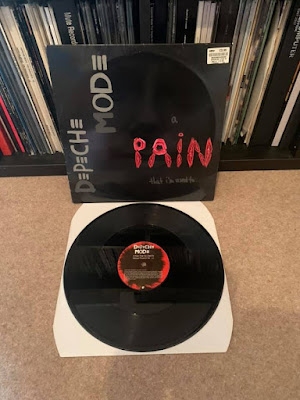 Martin is the cover star of L12BONG36. Its label is the best of the lot here and, as I mentioned above, it features the same two ear destroying remixes as PL12BONG36. 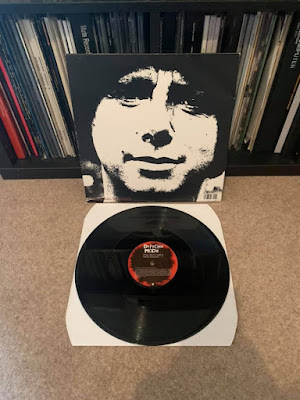 There's wee Martin on the rear sleeve. Hello Martin. Why do you look so unhappy? 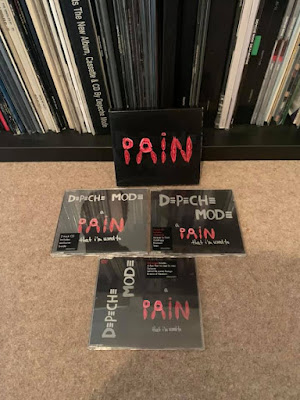 Once again we got two CDs, a DVD and a much sought after box to keep them all in. 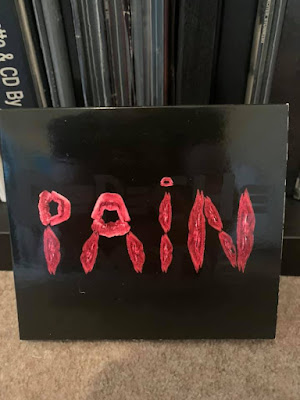 The front of the box looks like that. The cover star there is me due to my inability to photograph anything properly. 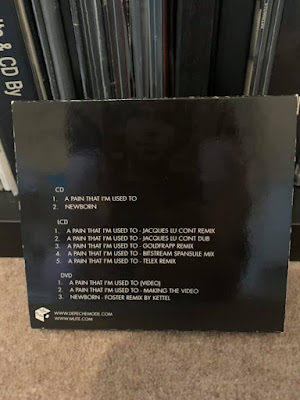 The back of the box tells you what's on each disc. 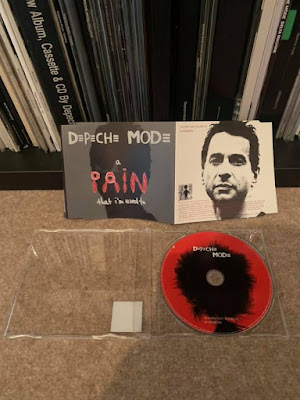 CDBONG36, the Dave CD, contains the Album Version of A Pain That I'm Used To and Newborn. 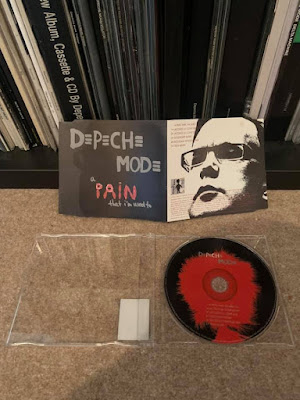 LCDBONG36, the Fletch CD, contains the five tracks listed on the box above. One of the 5 remixes of A Pain That I'm Used To, the Telex Remix is rather enjoyable. 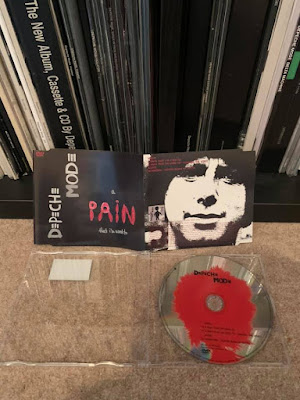 DVDBONG36, the Martin...erm...DVD, has the video for A Pain That I'm Used To, some exclusive behind the scenes footage from the video that surely no-one has watched more than once and the audio of Newborn (Foster Remix by Kettel).
In the UK, there were 7 CD-Rs available all featuring remixes and various takes on the promos above, There were also digital downloads which meant you could add three versions of A Pain That I'm Used To to your 100 song Ipod - Radio Version, Telex Club Mix and Telex Remix 2.
A two track CD single was released in Belgium, the Danes released a promo and the Greeks went mad and released five promo CD-Rs. Ireland released a promo CD too and Taiwan a CD single which was really LCDBONG36 but with a Taiwanese sticker on the front. Even though the single was released digitally only in the US, that didn't stop them putting out a promo CD which I am still missing and a further 6 promo CD-Rs. 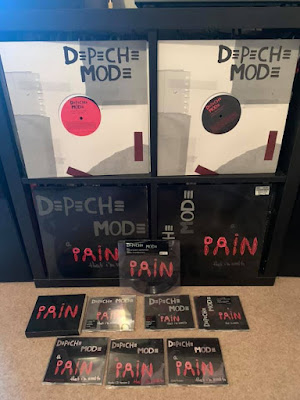 It's an odd one really is A Pain That I'm Used To. It's a cracking tune and it has a superb B-Side and a couple of really good remixes one of which is still used today. Ultimately though, its performance was underwhelming and that's a shame.
The next single would be a first for the band - a Dave penned single and what a sensational song it is. Anton also returned to video duty thank God.
Suffer Well is what we'll look at next time.
Posted by DJM at 14:12