Given the circumstances, not touring Ultra was a wise decision. The band were fragile at best so focussing on staying alive was rightly considered more important than a 9 month trek around the globe. Rather than follow that with another album the band (or perhaps more accurately the label) decided that the time was right for the much anticipted follow up to The Singles 81-85 so we got The Singles 86-98 a compilation of all DM's singles from...well...1986 to..er...1998. 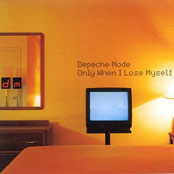 Prior to the release of the album we were treated to a new single named Only When I Lose Myself (OWILM). I still like the song and think it's a decent single. It didn't really work live on the Singles Tour however I'd like to see them have another go at it someday.  The single was released in the UK on 7 September 1998 reaching a pretty poor number 17 in the charts. The video was an arty affair featuring dancing twins, dancing men, car crashes and occasional shots of the band. Not really a great addition to the DM visual catalogue. There were a number of formats for us to buy. The standard cd single release CDBONG29 (left) featured three tracks - OWILM, Surrender and Headstar. The latter track is an instrumental which is perfectly fine but is no Kaleid. Surrender is the standout track on this release however. It's a typical Martin love song featuring holy beds, temptation and of course chains and whilst some might criticise it for being a bit too jazzy I think it's cool. Martin's live version is worth hearing too. Here's a random fact for you - the song was originally called Tempt. 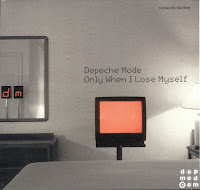 The twelve inch release (12BONG29 - same art as LCDBONG29) featured three remixes. First up we have the Subsonic Legacy Remix of OWILM. It's ok I guess - not good, not bad. Track 2 is the Dan The Automator remix of OWILM which is very odd but pretty cool featuring a lot of strings. Finally we get the Luke Slater remix of Headstar which does absolutely nothing for me. LCDBONG29 shares not only the 12BONG29's artwork tracklist but also its' tracklist

To confuse matters further L12BONG29  features tracks that feature on XLCDBONG29. Blogging about DM was simpler when CD mirrored 12, LCD mirrored L12 etc. Anyway, I'll focus on the XLCDBONG release as it is the pick of the bunch here. I remember trying to track this cd down in Glasgow upon its release. I went to a now closed record shop in the city's West end and asked the chap behind the counter of he had the new Depeche Mode cd single. Barely looking up from his copy of Hipster Monthly he snorted "No mate...what's on it?" to which I replied "A few remixes. There's one by DJ Shadow on there." This caused him to look up - "DJ Shadow? Aye right. Like he'd touch Depeche Mode." What marvellous customer service. Anyway, once I tracked the XLCD down it turned out that lifelong Depeche Mode fan DJ Shadow HAD touched the band and had provided a remix after all. 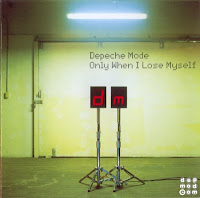 The XLCD (cover left) features five tracks in all. First up we have the 10 minute plus Gus Gus Long Play mix of OWILM. It's ok but it really is too long. The Gus Gus Short Play mix (track 4) is much better and is a really decent remix. It's also my wife's favourite DM remix. Track 2 is the fantastic Painkiller ( Kill The Pain- DJ Shadow vs Depeche Mode) a storming remix of the b side of Barrel Of A Gun by none other than Depeche Mode hating ;) DJ Shadow. I love this mix and have done since I first heard it. My friend Dom has this on a rare Mo' Wax 12" which he refuses to give me. You can click on his name there to be taken to his Twitter page where you can harrass him until he gives me the record. Track 3 is a remix of Surrender named the Catalan FC Out of Reach remix. It's ok but doesn't beat the original. Finally, we have World In My Eyes (Safar Mix). This was a bootleg mix which had been kicking around for a while which was then pleasingly added to this release. It's an excellent remix of an excellent song, featuring a clearly tired and emotinal Dave drawling "Goood evening San Franciscooooo" at the start which is sampled from the soundboard recording of the US94 San Francisco gig (get that if you haven't by the way). All in all, XLCDBONG29 is a real treat and a must have for Depeche fans. L12BONG29 lifted the Gus Gus Long Play, Painkiller and Catalan FC mixes from the cd and had the same artwork as the cd. 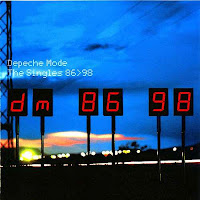 The Singles 86 - 98 (MUTEL5) (art right) was released on 28 September 1998 reaching a respectable 5 in the UK album charts. It was available on number of formats - Triple LP (MUTEL5), cassette (CMUTEL5), double cd (CDMUTEL5) and minidisc (ask your parents!) (MDMUTEL5). The tracklisting on all was the same with all the singles in date order bar the "Wait....What?" moment of finding Everything Counts (Live) and Little 15 at the end of the tracklist. Now I can sort of understand Little 15 as it was a Euorpean release only but Everything Counts (Live) was an actual single (see blog here) and should have slotted in between Behind The Wheel (7" remix - boooo) and Personal Jesus. Grrrr. Pedantry aside it's a good if inessential release for DM fans. The Singles 81-85 was re-released with a fancy new cover at the same time. I covered that on the Singles 81-85 blog which you can find here if you wish.

Pleasingly, Depeche also hit the road for a world tour where they played most of the singles and the odd older tune such as Somebody. The gigs were good but fairly restrained certainly when compared to the SOFAD era shows. The only downsides were the failure to translate OWILM and Barrel of A Gun into decent live versions. Oh and the support band I saw (Purity) were the worst support band I've ever seen.

And that's that. The Singles 86-98 closed a chapter on the band and opened a new one where they were back to a three piece. Would the next release be A Broken Frame part 2? No - it would be Exciter. I'll write about that next time but I should be warn you of something.


Thanks for reading and thank you to depechemode.com, depeche-mode.com (the new revamped Home. Go and check it out and while you're at it check out its Facebook page too) and depmod.com who helped me with the pictures as well as everyone else in the Depeche Mode world.
Posted by DJM at 10:27