As you'll probably know, I'm a bit of a fan of HQFU - she won last year's Almost Predictable for best new artist for example. Glasgow continues to produce a staggering array of incredible electronic music and HQFU is easily one of the standout acts in that deep pool of talent. Last night (8 April) at The Glad Cafe in Shawlands, Glasgow, HQFU launched her debut self titled album with a live performance that was one of the finest I've seen in a long time. 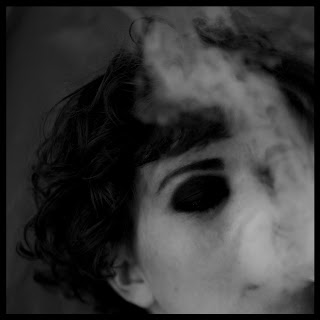 The gig was hosted by TYCI and their DJ's got everything started off perfectly with some outstanding tracks before and between the acts. You know that if someone plays Robyn they're hitting all the right notes. Support came from Mogen and her set was a perfect opener - icy Goldfrapp like synths mixing with poppy melodies and quite wonderful vocals. It was certainly impressive and Mogen is definitely one to watch.

HQFU's set was basically sensational. It's rare that a solo electronic artist can make such an impact really - the whole room was bouncing around from the off and it had the feeling of a full on rave at times, rather than a debut album launch in a small venue. Live, HQFU's already powerful, 90's dance influenced tracks gain an extra edge and her live set is one you have to catch. A track like GTFOOS is a prime example. On the album, which I'm playing at neighbour bothering volume as I type, the track is a driving, electro monster, but live, it is simply sensational.  Good Reason was another standout track. I really don't know how to describe how immense it was. It was one of the moments where you realise that live music is simply one of the greatest things there is. I was reminded of the likes of Orbital's gigs at the Barrowlands which are still among some of the finest I've been to. HQFU does what they did - grabs you with the music and holds you there for the whole show. It was ecstatic, electronic perfection and I don't think anyone there last night would disagree. One of the best things about live music is seeing an act exceed the expectations you had on going to the gig. I'm a full HQFU convert already, so I had high expectations. They were more than exceeded - this was easily one of the best gigs I've been to in a long time. Your task for today is to buy the album (link below) then check when HQFU is next playing live and make sure you get a ticket. You do not want to miss out.