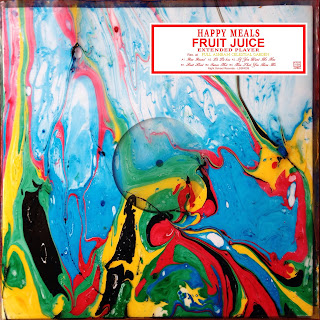 Happy Meals album Apero was one of my favourite albums of last year, albeit it was released in 2014 - I was just a little slow to catch up. Its shimmering, space disco electronics are a joy to behold and it remains on heavy rotation in my house, When I spoke to their label Night School's boss Michael Kasparis last December (http://almostpredictablealmost1.blogspot.co.uk/2015/12/the-almost-predictables-2015-no2-label.html), he said that one of the things he was looking forward to in 2016 was new Happy Meals material. He'd heard demos at that stage and was very excited. Their first release of 2016 is the Fruit Juice e.p.  and, presuming one or two of the tracks were among the demos Michael heard, he was right to be excited. This is a wonderful record.

What Happy Meals have done here is take the best bits of Apero and added a layer of pure pop to them. If You Want Me Now encapsulates that perfectly. The otherworldly feel of Apero is present initially as the sparse, bewitching electronics of the superb opening pair of tracks Run Round and La Labas bleed into it, but the song then veers off in a correctly unapologetic pop fashion, producing a curious but marvellous hybrid of experimental electropop and the kind of pop tweaks that were last heard in late 80's pop hits. Genuinely, there are a couple of points at the song's poppiest point that bring to mind a sort of SAW production feel and why not? It works perfectly. If You Want Me Now is impossible to ignore and it's a song that you are bound to love.

Wonderfully, the duo sort of reprise the song for the e.p.'s last track Now That You Have Me, turning it into a slice of aggressive electroinc disco, adding a layer of darkness and a spot on acid bassline that take the song into another, fascinating dimension. Outstanding. The track that precedes that, Suivez-Moi is a hint of where Now That You Have Me is going to go. It's immediately brings to mind the genius of Liaisons Dangereuses or D.A.F. or even early Human League - sparse, thumping electronics that showcase everything that is great about stripped down, powerful electronic music. Suivez-moi is another song you have to hear.

Fruit Juice is further evidence, if evidence were needed, that Happy Meals are onto something very special. It displays numerous facets of their sound and, thrillingly, despite the diverse feel of the tracks, all of them work perfectly together, producing a stand out release. Go and get your hands on this now. It'll be the best thing you do today.

Fruit Juice e.p. by Happy Meals is available now on Night School Records and is released digitally and on limited edition 12" in a hand marbled sleeve meaning no two sleeves are the same. Very cool.