IS THIS THE ULTIMATE DEPECHE MODE SETLIST? 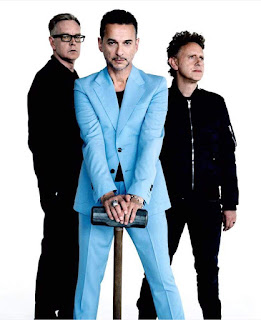 As you will have seen a week or so ago, this blog and the marvelous Halo - The Violator Book blog have been running a poll to find out what Depeche Mode fans would love to hear at a gig where Depeche played the ultimate fan chosen setlist. The original posts (mine here and Kevin May of Halo's here) asked The Black Swarm to pick 20 songs that they thought would make the best setlist Dave and co could play and the results were rather interesting and certainly not as obvious as you might expect.

This whole project was run in conjunction with the London Stadium ahead of Depeche Mode's hugely anticipated gig there this weekend and an article summarising our findings will appear on their site very soon. Being Depeche fans, both Kevin and I know that our fellow fans will want to know what they ultimate DM setlist is however, so here's how it played out. I thought it might be fun to show you some of the voting too as it was quite an eye opener.

Firstly, I should point out that we had to change the length of the setlist to a fan pleasing 22 songs. This was because there was a tie for spots 21,22 and 23, and we felt it was only fair to include those tracks. I say "we" there - what I mean was Kevin felt it was fair as it squeezed in a song he loves and one I think is at best overrated and only resonates with fans because of the admittedly cool metal bashing parts that feature in it on 101 - that song is Nothing. You traitorous bunch voted that as your 22nd favourite, meaning that it had to be included here, How dare you. It got one more vote than the likes of Leave In Silence, Here Is The House and The Things You Said. This sort of shoddy voting is how we ended up with things like Brexit and Trump you know.

Kevin and I collated the results (ok, Kevin collated them) and we mulled over a setlist (by mulled I mean Kevin prepared and I made a couple of changes) and we arrived at this - THE ULTIMATE DEPECHE MODE SETLIST. Brace yourselves:

Encore 1:
Shake The Disease (Martin solo)
Nothing
Everything Counts

Encore 2:
The Sun & The Rainfall
Enjoy The Silence
Never Let Me Down Again

So that's the ultimate setlist as chosen by you. Surprisingly little love for Martin there and some bang up to date songs which is interesting. The Sun & The Rainfall makes a justified appearance, as do Lie To Me and Fly On The Windscreen. I'll be at the bar in the middle of the first encore.

Kevin's post today offers you many more stats than this attempt to denigrate an apparently much loved song, so I strongly advise you head over there for a fuller breakdown. Also, could the one person who voted for Hole To Feed please see me as we need to have a word.

Thanks very much indeed for taking part in this and thanks to the London Stadium and Kevin for getting me involved in this. Feel free to leave your setlist comments below. In the meantime, Saturday will reveal whether or not Dave, Martin and Andy have taken any of your views on board. See you there!

Here is my chosen setlist. I win ;)