Welcome to the second in the series of the Global Spirit Tour reviews and the first by one of a series of guest reviewers. Kevin May is a UK based journalist who usually writes about the travel industry and technology. He is also well known to Depeche Mode fans as the author of the forthcoming book Halo from Grosvenor House examining the story behind Violator. To say that book is keenly anticipated is something of an understatement. It's going to be something every Depeche fan will want to read. Keep an eye on Kevin's Halo Facebook page for all the relevant info. Anyway, over to Kevin.... 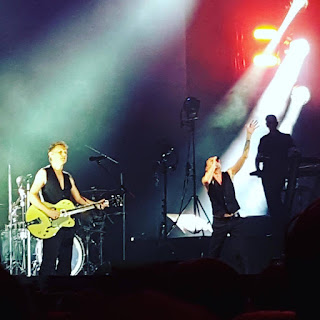 I remember reading an article a while ago that analysed how the opening night of a tour is never the one that causes the most anxiety.

It is always the second show, and perhaps the two or three after that.

Sure, debut nights have very high stress levels - the months of preparation across every area of putting a band in the road need to come together and work seamlessly for two hours.

Staging, AV, merchandising, ticketing, VIPs, press, etc. Not forgetting, of course, the weeks of rehearsing and trying to make the live sound as good as possible.

There must be a huge sense of relief when it does all work - or appear to - on the opening night.

The reaction (here on David's blog and social media) to the Stockholm gig, the first of Depeche Mode's new Spirit Tour, had been extremely good.

Yet it is said that the second night can often show the frailties of taking a massive production on the road - getting the stage, lighting, screens, computers, etc packed away and then back in place in a new venue, in a new city, within a day or so.

The first airing of new set list can also cause headaches - poor reaction from the crowd (let's face it, reasonably unlikely in the case of Depeche), realising that some of the arrangements or the video backdrops need to be tweaked, concerns over the running order and countless other creative elements of putting on a two-hour gig.

Still, it appears that - as Depeche Mode roll into Amsterdam, two days after the gig in the Swedish capital, with a 14-hour drive - things are going extremely well so far.

The Amsterdam Ziggo Dome is a terrific venue - big, airy, but manages to be more intimate than some of the often soulless atmosphere of the identikit mega-arenas in Europe, such as the O2 in London.

Danish band The Raveonettes, the latest in a long line of brave souls to support Depeche, are loud, creative with how they use guitars alongside other instruments, and extremely good.

Some Devotees will moan, inevitably, but their grinding rhythms, superb close harmonies, heavy bass and wall-of-sound guitars seem to somehow capture a mood of both edginess and expectation.

They go down pretty well with the Dutch crowd (and me). Fair play to them. I'm a new fan.

The lights dim after what feels like an interminable wait to the strains of Revolution by The Beatles - cue the first of many sing-a-longs of the evening.

If the aim is to get the crowd whipped up into a frenzy, it works.

The first strains of Martin Gore's guitar on Going Backwards ring out and it is soon very obvious that thousands of people already know the words of this and every other song from the new Spirit album, released just seven weeks ago.

It is, as has been noted in numerous forums and blogs, one of the best opening tracks from a Depeche album for a long time and, in this setting, the perfect song to kick off the gig.

This is no low-key Welcome To My World and Angel from the Delta Machine Tour - we are in full-on audience participation (and appreciation) straight away.

They stride through the first half a dozen or so songs like a well-oiled machine (including a wonderful Songs And Faith And Devotion album version of In Your Room) - the tightness of the show and the AV showing no signs of a lack-of-practice as it's still early days in the tour, or following the 1,400km drive south from Stockholm.

As mentioned in my review of the Barrowlands gig at the end of March, Depeche Mode in 2017 seem very much at ease with themselves.

It's noticeable in their confidence in the new material and their body language, especially between Martin and Dave.

There are hugs in the semi-darkness between songs (cue a huge roar from the crowd stage-left) and Dave even performs a "we-are-not-worthy" action to his band mate after a song later in the set, again triggering cheers from the masses.

Dave is in his element, as always - spinning, pouting, grimacing and grinning his way through songs.

The extended catwalk stage gets a visit on a few occasions - the soaring brilliance of Cover Me has Dave ordering the crowd participation from its very end and Martin encourages the crowd yell-a-long at the end of his perfect rendition of Home.

So what stands out?

Wrong has a new synth-led intro and generally grinds away merrily in its own repetition. Corrupt has finally won me over - perhaps due to it getting an extremely dirty feel to it for the tour.

Everything Counts creeps up on a few people, as the famous melody is introduced quietly against a low-fi, trip hop-style beat.

Still, when the song gets going, it's pandemonium in the crowd (the second biggest cheer in the first half of the set after a rapturous World In My Eyes). It's a wonderful moment, especially with the 101-style participation from the crowd at the end.

So, here's a minor wrinkle - we're not in full Devotional-style, split-level with the stage design but Dave Gahan does use a higher platform on a number of occasions, like a preacher's pulpit (borrowing from the Where's The Revolution video) that sits about a third of the way up the giant screen behind the main playing area.

Maybe I missed it, but he's never lit fully by the spotlights, just a silhouette.

This could well be the point, of course, yet it often took a while for the crowd to notice he was actually up there ("Oh, THERE he is!! "Yeaaaaaah, Dave!"). I suspect that part of the "performance" might change as the gigs pile up.

Anton Corbijn's stage projections will polarise opinion, as always, but they're bright, often weird or surreal, but do not take anything away from the performance.

They close the main set with Enjoy The Silence and Never Let Me Down Again - such staples of the Depeche live act these days but, let's face it, it takes a heart of stone to not be moved both by their brilliance as songs and, in a live setting, how uplifting it can be having 15,000 people singing and waving along together.

Martin returns with Peter Gordeno for the encore to sing a pitch perfect version of Somebody (I hear a "I think I'm going to cry" from behind me somewhere). Walking In My Shoes, with its new intro, follows.

It's easy to forget that not every fan in the Ziggo Dome tonight would have known what the setlist was likely to be, had watched footage from the previous gig or - shock, horror - simply doesn't use social media to find out every detail about the band and the tour.

This is why, for me, perhaps one of the moments of the night is when it finally dawns on thousands of people, as Dave sings the first or second line, that Depeche Mode are indeed playing their tribute to David Bowie with a version of Heroes (Peter is also out front again on the bass guitar).

"Oh my god! Is that Heroes? Oh my god!" screams a woman behind me.

Somewhat ironically, given that you're reading this, there's something to be said for not reading this or any reviews of the Spirit Tour!

A powerful Personal Jesus ends the night (I'd love to know where the loudest "Reach out and touch faith!" is on the tour) and then it's all smiles, bows, hugs from the band (Fletch gets a huge roar when he saunters over stage-left), and they're gone.

It's still (very!) early days on the tour, but if they keep up this level of intensity, then fans are going to be in for a treat over the course of the next 12 months.

Someone asked me after the gig why I thought it was better than my experiences of the last few tours.

It's two-fold: firstly, the new songs from Spirit that sprinkle the setlist are all extremely good, meaning the overall quality of the songs is arguably higher than in previous tours. A personal view, but I think there's something to it.

Secondly, there's what appears to be a very positive and buoyant mood in the camp - the pre-tour interviews have been some of the best the band have done in years, for example - which comes through on-stage.

Depeche Mode appear to be very comfortable in their current skin - the energy both in the performance of the songs and their physical presence (especially Dave) is higher than I can remember for many years.

And, best of all, they know it and they can see what it means to the fans who are clearly lapping up what could eventually be seen as Depeche's most passionate and celebratory gigs in a very long time.

Thanks very much to Kevin for that wonderful review. I mentioned his Facebook page earlier - make sure you check him out on Twitter (https://twitter.com/HALOBook) too.
Posted by DJM at 21:18