For this review we welcome back Kristin Pinnatore who previously reviewed the Santa Barbar show for us (http://almostpredictablealmost1.blogspot.co.uk/2017/10/live-review-depeche-mode-santa-barbara.html) . The Oakland show saw Kristin take her 10 year old daughter Dessa along which is a cool thing to do. I imagine it blew her mind. Another life long Devotee is found! Thanks very much to Kristin for this great review. All pictures are hers except where otherwise credited i.e. I took one from Depeche Mode Classic Photos & Videos Facebook Group.

This is the second Spirit review I've written in the wake of an unfolding tragedy here in the American West. On October 2 I saw DM in Santa Barbara, California as details of the what’s being called the worst mass shooting in America’s modern history were just starting to crystallize. I'm still shaken to the core by the events in Las Vegas, and I know so many, many DM fans are, too.

A week later I was waiting to hear word from my best friend, Nancy, who was stuck behind fire lines that had just exploded in Norther California, turning into the undisputed worst wildfires in Our state’s history. Cell phones, internet, land lines, and electricity failed for her and thousands of others, and our group of friends and family spent a worried night trying to track down all of those we knew.

We didn't hear from Nancy until mid-day Tuesday (the day of the DM show in Oakland), but it was good news! She was out of the fire zone in the nick of time and on her way for Depeche Mode in Oakland! Road closures, heavy traffic, smoke, etc. etc. - nothing could keep her away from the Black Celebration.

After a grateful reunion Nancy and I, along with my 10-year-old daughter Dessa, headed out for a night on the town. This was to be Dessa’s induction into the Black Swarm and she was as excited as she could be. Seeing DM through her eyes was something I’d been looking forward to for months. Time to put all those hours in the car singing the back catalogue to good use!

We had “Hospitality Package” tickets for this show, which included a pre-show party. As I saw in Santa Barbara, communication between the venue’s security and the tour reps was problematic again in Oakland. There were several entry points at the arena that had access to the pre-party entry plaza, but not all of the security people knew where they were, or even that there were people with early entry at all. We wasted a good amount of time being told by security, “Nobody told us. They’ll radio us when you can go up” (didn’t happen until almost 6 pm for a 5:30 call). I wouldn’t assume that anyone from the tour or the venue or whoever is supposed to help communicate between them reads these reviews, but just in case - please work on your communication at the venues! I keep seeing beleaguered security folks who have been told nothing about the evening’s plans and are completely incapable of putting concert goers in the right place! It’s frustrating for everyone involved.

Now that that’s off my chest, let’s return to the show! The pre-show snacks, music and swag were great fun, and very impressive to a 10-year-old (I didn’t find it half bad either). After our “crowd-free” merchandise shopping (there was a crowd but not a big crowd…), we headed to our seats on the floor. We were able to snag 5th row center during the pre-sale and couldn’t complain at the view! We were able to make some new friends at the pre-show and say hi to old friends, so it was a very welcoming place to be.

I wanted to be sure to leave enough time to enjoy the pre-show party before Warpaint took the stage so that our little group could really settle in and enjoy them. I’ve loved their sound and will definitely be listening to them more often, and my daughter was grooving along as well. Warpaint definitely has some new converts!

The build up to DM’s appearance was as tension filled and exciting as all the previous reviews have discussed. The difference for me, this time, was the presence of my daughter next to me practically vibrating with excitement, and the only slightly muted calls of my best friend just beyond her. The long awaited moment had finally arrived. 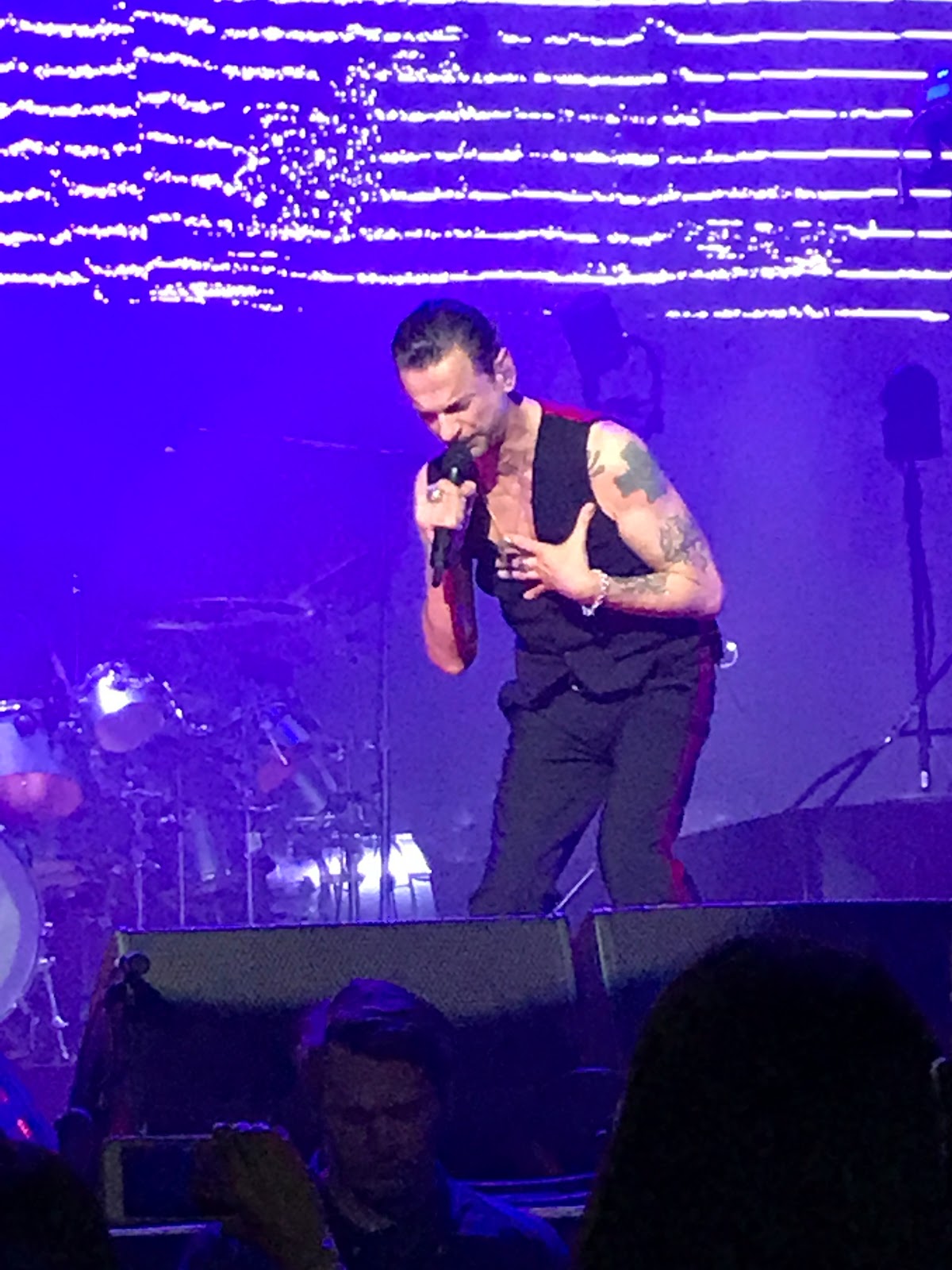 The setlist was no different than it’s been in a long run of North American shows. I’m sure the boys are saving any real surprises for the Hollywood Bowl dates. And yet, the show still felt fresh and exciting at this, my third viewing of it. What’s truly amazing to me is that the men on the stage keep it so energetic and vivid performance after performance.

The Oakland audience (at least where I was sitting) was really engaged and the sing-alongs were vibrant. Martin went out to the end of the catwalk to lead the masses at the end of Home, though it didn’t extend beyond the end of the song.

The last four songs of the main setlist (Everything Counts, Stripped, Enjoy the Silence, and Never Let Me Down Again) got the biggest response from the arena, of course. I want to go on record as not a fan of the t-shirt gun at the end of NLMDA, though. It feels like a time-filler for Dave, who commands enough attention as it is, and it makes the wheat wave moment of togetherness into something else. Something that feels like a cheapening of the moment. I doubt that was ever the intent, but it feels forced to me. 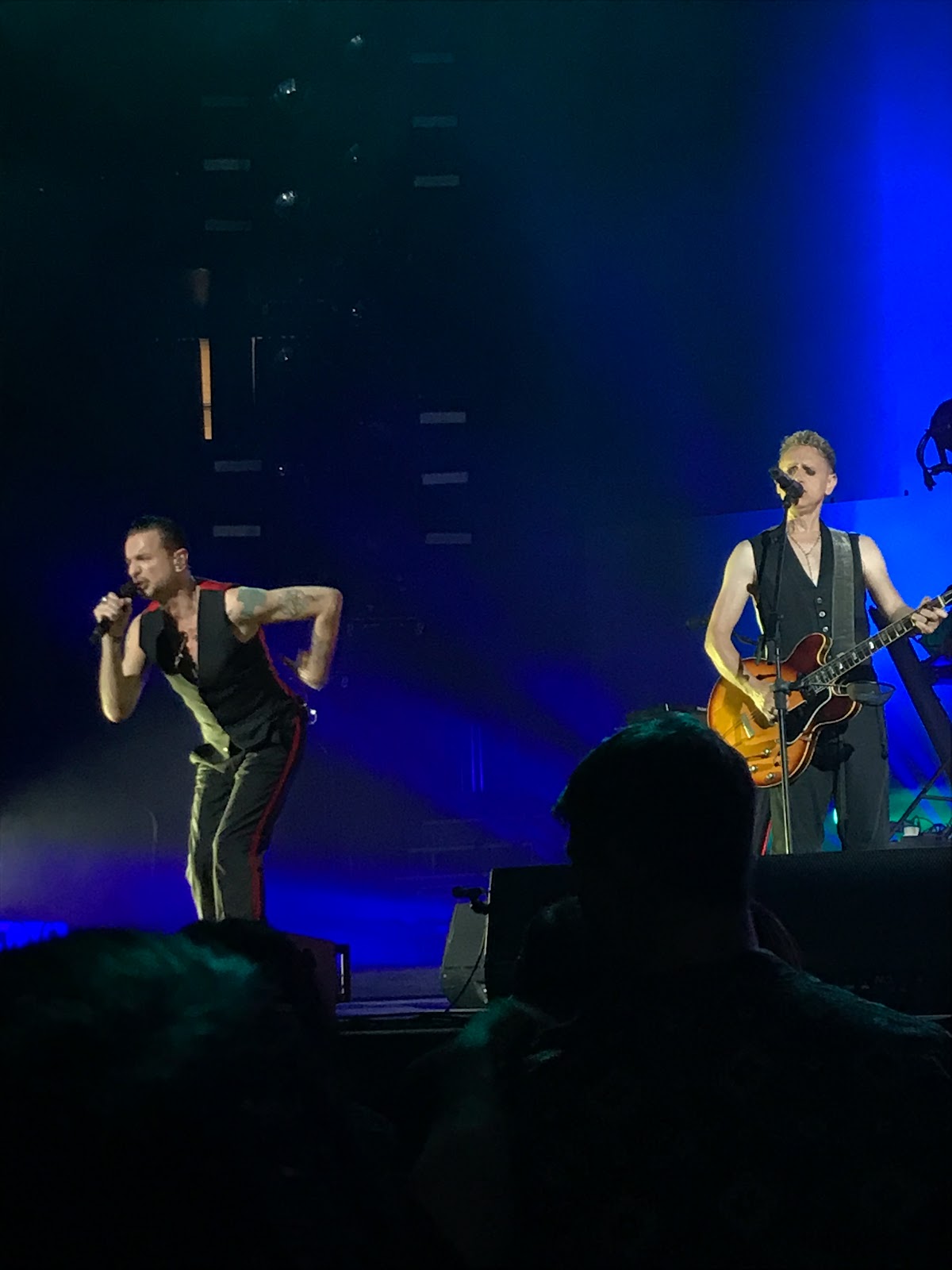 As always with DM, the end came too soon. Even a five song encore doesn’t go on forever, I’m afraid. The bows were taken and I finally got a decent few shots of Fletch.

It’s been a wonderful privilege to be a part of this massive effort worldwide, so thank you all! I’m looking forward to reading more reviews here as the Spirit train rolls on towards 2018! 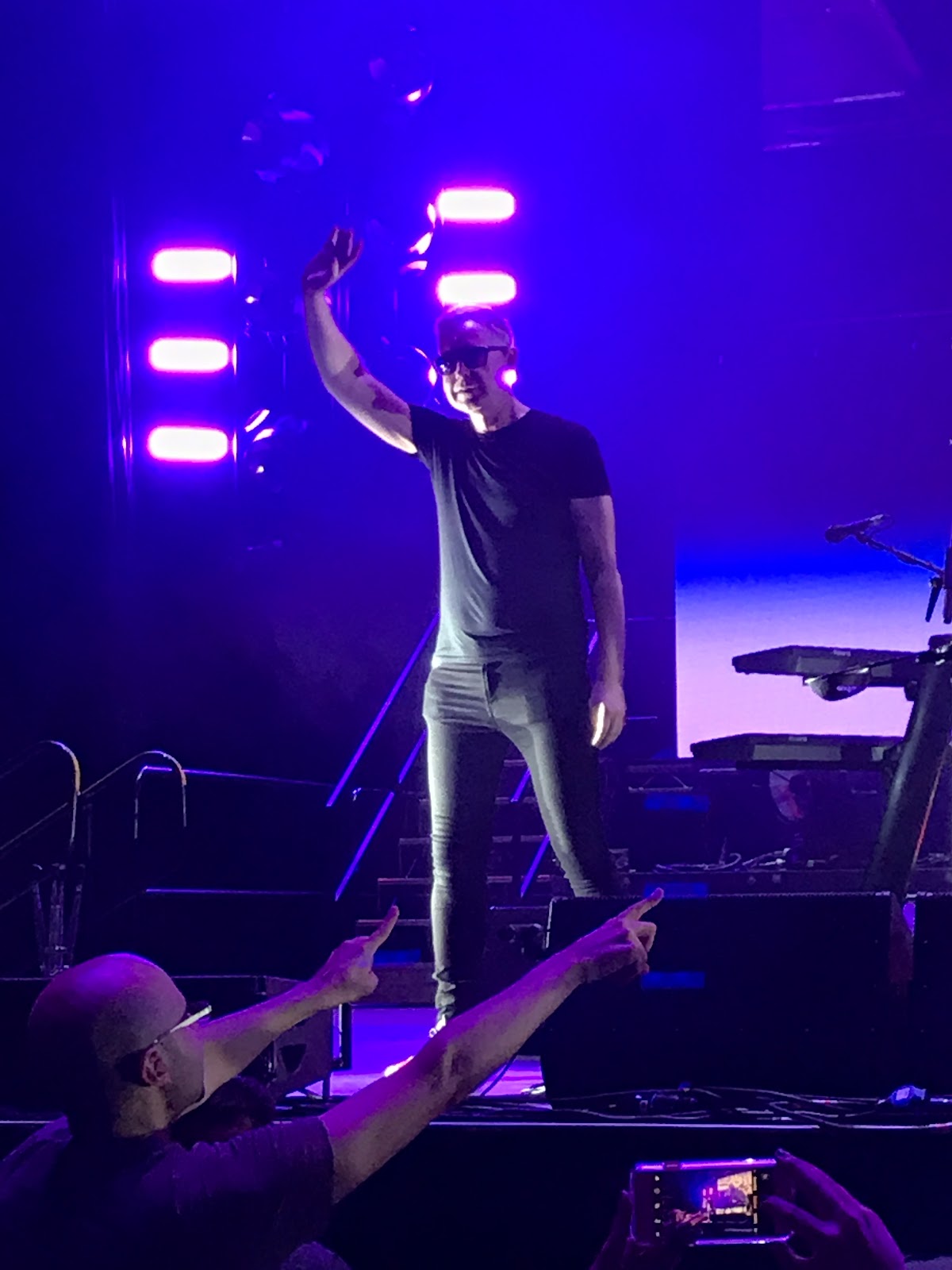