For the final review of the fourth leg, we welcome back Claudia Schulzi. As you surely know by now, Claudia runs the superb My Daily Mode blog, where you can read all about her adventures following the band on the Global Spirit Tour. By this point in the tour, it's quite possible that Claudia has been to more concerts than the band themselves - make sure you check her blog out. As ever, Claudia's review is one you won't want to miss and it's one that I think a lot of us will have a great deal of empathy with. A bittersweet Brazilian tale. Thank so much for the words and pictures Claudia - see you in Berlin.

Depeche Mode in Sao Paulo, March 27 or "Things Get Damaged"

My airplane landed at the concert day in the early afternoon. I made a late decision to go to Sao Paulo or San Paolo, as it was written on the departure board in Buenos Aires, because I heard about the crimerate in Sao Paulo and I wanted to stay as short as possible a time there. Happily, our hotel and the Allianz Park arena was located in a very safe area, called Perdizes. Our hotel was a small skycraper with 18 floors and from the top I could see the whole city with this crazy skyline. So many skycrapers, unbelievable. I regretted immediately that I couldn't stay longer in this city. I walked alone to a very good Burger restaurant "Ze Do Hamburger" where I ate a very good vegan burger and drank an amazing big fruit juice. The restaurant was in a 50's diner style and the waiter was so unbelievable friendly. I forgot that I had to speak Portuguese now and thanked him in bad Spanish!. He smiled and I recognized my fault, so with the help of my mobile phone I learned a very few words in Portuguese like "Thank you / obrigado", " hi / bom dia", "Goodbye/ adeus", "please/por favor". He laughed full of joy and I left this restaurant very happy. Next step: I needed beer to warm up the concert in my hotel room, so I walked 10 minutes to a huge supermarket where I bought beer, water and some fruits because its looked so delicious.


As I left the supermarket it started raining heavily. I have never experienced such a strong rain. Unfortunately, the area was very hilly, and so the water poured down the hills, it formed small rivers. There was no way to get to the hotel dry. When I walked into the foyer, the staff laughed at me because they had warned me about the rain .... who knew this was what they meant by rain? So I did not know this rain, it was like showering.  I spent the next 2 hours drinking beer and drying my shoes.

We then walked to the nearby Allianz Parque Arena, a very modern new arena, home of the football club SE Palmeiras. It will take up to 55000 people for concerts, but I think there were 30000 devotees. As we reached the stadium the rain came back on, not so strong like before but strong enough. We decided to miss the support band and spent time drinking beer inside. We bought commemorative beer cups of the event for a really small amopunt of money, taking pictures with a special event picture machine and smoking and bought our Brazil Global Spirit t-shirt. We spoke with a few fans, wow, everybody was so friendly, another increase to the already incredible friendliness in all countries we'd visited until then.


Then the concert started. From the beginning I knew, that will be the best concert of the South American tour, because the devotees welcomed Depeche Mode with such an applause. Who would have guessed? I just did not expect anything from the Brazil concert, but it was such a long time since Depeche Mode played in Brazil and I think it was about time. The rain was no obstacle for the fans as all of us wore capes, but I decided to lose mine, because as well as the rain, it was also very hot in Sao Paulo, more than 85 degrees Fahrenheit. 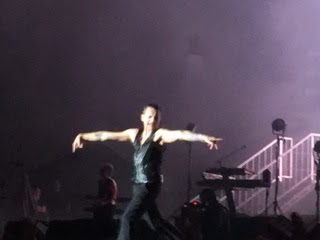 Dave came down to the stage as Going Backwards started and everything worked fine again ( the sound, the screens...). It's No Good  saw the fans started to dance wildly; very funny all that rustling rain capes. During Barrel Of A Gun something crazy happened -  suddenly, people dancing next to us ended up in a tough fight. Several people beat each other and were held back by others. The fight seemed to end, then suddenly a woman hit a man very hard in the face. He immediately began to bleed and lunged at the woman, they rolled on the ground. I was almost knocked over by retreating people. There was no security at all, neither from the stadium nor Depeche Mode. Suddenly I saw Andy's bodyguard trying to figure out what was going on. I waved and signaled that help was needed, but he turned away. The action was far from Depeche Mode and no danger to them. Really shocking. That would never have happened when Daryl Ives was still chief security. He was not always nice, but mostly on the side of the devotees. He took good care of his band and his audience. Unfortunately, Daryl died of a heart attack in February 2007 in Hong Kong at age 50. But be assured, Daryl, we don't forget you!

It took me a while to follow the concert again and I missed Dave's greeting at the end of the song. A Pain That I'm Used To was great and then Useless, yes, the screenings worked well and the fans from further away could enjoy Dave's pithy show on the side screens. Like every gig, Precious is the first big highlight: "Things get damaged Things get broken I thought we'd manage But words left unspoken Left us so brittle There was so little left to give" The text is probably about a relationship but it also fits in with all the cities in South America that I've seen. Many things are damaged, broken; there is not much that could help. Or is there? In Sao Paulo, all the people I met (and this was repeated during a few days in Rio) were as warm-hearted as anyone from Europe. It touched me a lot, even very poor people, who sold their last belongings on the roadside, still smiled at me ... And so the fans in Sao Paulo sang fervently along to Precious. 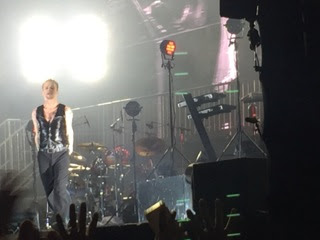 Then Dave took a sip of tea and World In My Eyes began and it was also celebrated joyfully. After the song Dave asked the fans "How are you doing“? And again - “I said, how are you doing?" He was satisfied with the screaming of the fans. Cover Me! I say it again, best song of the tour. The sound was powerful and Dave danced in the rain on the catwalk, after he shook hands again. Then Mr. Gore sang Insight: "Talking to you now, the fire still burns", but sorry Martin, I could not hear you, because Gordeno sang so loud. I wanted to hear Martin Gore not Peter Gordeno. The Brazilians liked Martin Gore, he got applause like in Europe. Home was wonderful, the sing along was the best of the South American Tour, I missed it. My favourite moment with Martin Gore is, when he runs back to the stage, the catwalk is a small hill and it looked so funny when he ran up this small hill. He is so unpretentious, I like it.

In Your Room, the screens worked again, but I tried to look only at Dave to enjoy this great song. He looked like he's telling us a story that only he knows; about his special room. Where's The Revolution - sorry yawn. Everything Counts in Brazil was the best song of the South American tour. Finally the fans celebrated it like I know it from Europe. The fans let balloons fly, the rain stopped meanwhile and the air was full of haze, looking amazing. Dave turned to the band to make clear he wanted to celebrate the song a long time. He enjoyed the bath in the masses. At the end he knocked a balloon away and thanked with “Sao Paulo, you are really the best", and it was true. Stripped gets louder from concert to concert. Dave sang it full of fervor, sometimes falling back in his old roaring. 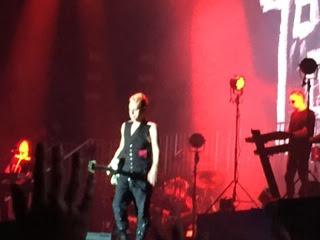 Enjoy The Silence  saw Martin and Dave stood as ever in front of Gordeno, with Dave later imitating an ape in front of Andy, before he then shot the pig on the screen. Enjoy The Silence was such a long time my favourite live song, over years I played every morning another live version of this song, but with this tour I stopped loving it because I didn't find this tour's version as much fun. During Never Let Me Down Again, the fans hardly waved enough for Dave, he urged them to wave more. And finally the gun came back, Dave didn't use it in La Plata, don't know why. But he smiled very happy as he got it back in his hands. Strangelove -  wow, the fans loved this song and Martin's performance. They screamed louder than me, and that's not easy, believe me!

I used Walking In My Shoes to breathe deeply, before I danced and screamed to the last two songs. The current live version of  A Question Of Time is the  best live version of this song for a long time and it acts as a prelude for my favourite song, the strongest song ever,  Personal Jesus. I danced to it a last time on this amazing continent. My journey came to its end. Good bye Depeche Mode for nearly 3 months. Actually I wanted to fly to the second North America leg, but I decided to cancel it, because I was very disappointed about the concerts in South America. Depeche Mode have to change the setlist and the sreenings, I can't keep watching this much longer. So I will visit only a few festival concerts before the tour ends in Berlin. A kind of saying Goodbye to my long life love Depeche Mode...."This is the last time I'll say goodbye /The last time Then we do not have to lie /The last time Call it what you want /You do not mean a thing to me no more“. It hurts me in the soul and I cry while writing, but it is the truth.

Thank you Claudia
Posted by DJM at 16:15