For her last show on this tour, Katia Gigliotti returns to review her second show for this project following her Turin review on 11 December. As we'll see, a festival crowd is very different from the usual Depeche crowd, but once again Dave wins them all over. Thank you very much for this superb review Katia and for the great pictures too. It's great to see the blog t-shirts getting out and about! 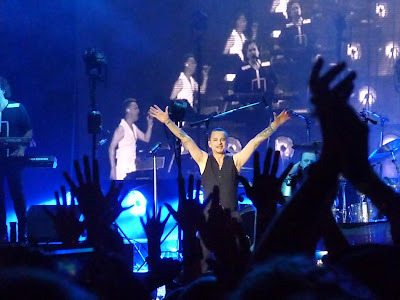 I do not like festivals. That's a fact. But I do love Depeche Mode, so when I heard about my fave band coming to one of the nicest spots in Piedmont, I couldn't help going.

People have been queuing for two days before and when I arrived in Barolo, after work (somehow I have to earn money to spend for music and football), it was around 5 p.m.  and the small Colbert square was already crowded in the front rows. It was so hot that, to survive, I decided to stay aside, by some trees, to enjoy some shadow, but I wore very high heels, trying to see from an higher perspective: I can assure you it was a physical act of bravery.

I could not work out where to base myself at the festival: where I was, you could breath, but you were continuously punched and pressed by people looking for their way to the bar, to the toilet and to find other friends. That happened not only before the show, but also during the opening act  - Marlene Kuntz, a quite famous indie rock band of the late 90s from the area.  Very good musicians, but I personally have found their music not very interesting; it seemed to me the singer's voice disappeared in the noise of the other instruments.

But in the front rows, you could not breath, you were packed like sardines in a can, continuously pushing and fighting to keep the position. We were very close to the stage though -  if you stretch your arms you feel can almost touch them with your fingers.

Another thing about festivals, or, at least, festivals in Italy, is the security staff. Their mantra is live and let die: that is, as long as you do not bother me and, instead, bother other people, we are ok with that.

I found the DM fans community one of the most gentle, kind, amiable and I always found good friends in Italy and abroad, devotees are unique and this project is one expression of that (thank you David!). During festivals however, you can find a lot more of rude, unkind and uninterested people, and this affects also the pleasantness of the concert. At the end, that is why I do not like festivals.

Another side effect of festival is the reduced set list: DM started with the usual Revolution intro at 21:15. Dave jacket on, appeared from one side of the stage (smaller stage: no catwalk, no top stage as per other concerts). 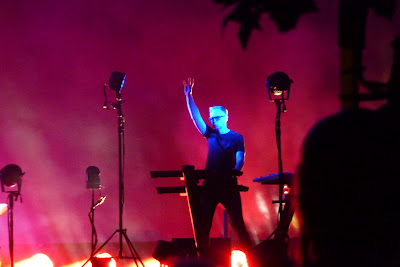 Dave was, as usual, so elegant and self-confident from the very beginning: his voice warm and overwhelming, but too much confidence led him to make an error on the first song. No problem, he recovered immediately, dominating the stage, his voice perfection, but he is human after all and I enjoy these small mistakes that break the routine.

Jacket off for the second song, It's No Good, and Barolo is already in flames. Martin looked so pure in his white suit and shining with a nice glitter under his eyes, whilst Fletch caught the audience moving and shaking since the very beginning (sooo cute, I adore him).

After many concerts, and many reviews, the setlist is probably not the most interesting thing to read, but even if you can hardly find a surprise in the show, every gig is different and every song has a slightly different effect on the crowd.

Dave shaking and rotating with the mic stand (I would fall on the ground after the first turn!) on A Pain That I'm Used To", then the sweet Precious led to World in my Eyes. Dave kept going with his usual touching, even if he started songs before his personal sensual show in the show: half of the crowd wish they were the mic stand.

Cover Me is by far the best track on Spirit, and it is incredible how it caught the audience, even without the usual trip on the catwalk.. As my devote friend Emilia says, this music, like the song of the sirens of Ulysses, imprisons you in an ultra-earthly dimension: takes you away, in the Cover me spacecraft, to another galaxy with a pentagram structure.

It is one of the best moment of the show, or at least the one that touched me more: from love to love. After Cover Me, the only Martin moment of the show, one of the most passionate, intense, touching renditions of Somebody I have ever heard. I guess I was not the only one that brought into tears. This song is my religion, it is the best love song ever without ever using the word love a single time.  It was so incredible and all the crowd was so taken, that, coming back on the stage, Dave asked Barolo: "Wasn't that nice?" and then "wasn't that beautiful?" Yes, it was, Dave. Indeed. 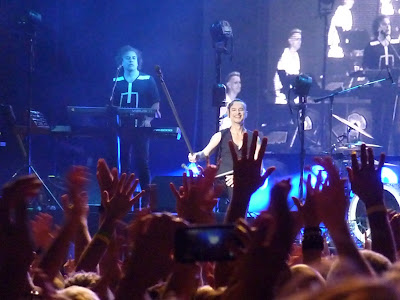 To recover from such emotions, here is the wonderful In Your Room (another of my favourites) and oh that video! I love those dancers, the colours. I saw it several times already (this is my 7th and, unfortunately, last date for the Spirit Tour), and I never get bored.

Dave looked very chatty, inspired, sending kisses to the audience. He seemed happy on the stage, like he tasted one of the finest wines in the world, Barolo (no idea if he loves wine, but maybe Fletch and the crew did enjoy it - David, if you haven't yet, you should come here and try).

Time flies and the songs rapidly follow one another: "Everything counts", "Stripped", "Personal Jesus"; the setlist is quite short, with the unavoidable (luckily!) Never Let Me Down Again and the usual wheat field, in the land of vineyards and it is, sadly too early, time for the encore.

Time to appreciate the beautiful video on Walking In My Shoes and then Enjoy the Silence (I still found a guy in the crowd dressed like the king of the video: with such a hot temperature!) to end with the one and only surprise for this leg: an incredible Just can't Get Enough. 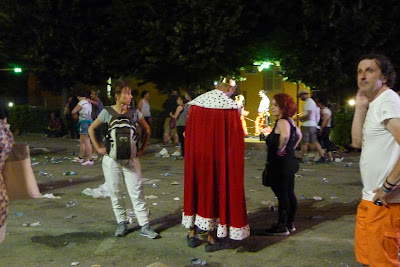 I know most DM fans do not like that song so much and maybe neither DM themselves, but I was so impressed by Christian and the band keeping the song so up-to-date with this drum sound, and its impact live has remarkably improved, compared to its first appearance in this tour.

I kept singing and thinking I just can't get enough. And I really can never get enough of Depeche Mode, despite all of this sweat, beer pouring, feet hurting and neck elongation trying to see something over that sea of heads and dozens of mobile phones (we luckily get rid of one old guy using a tablet during the opening act!). I would be ready to do it that again and again, because Depeche Mode are not only a band, they are my religion, they are a way of living, they are a link among fans, that link that seems to have existed forever even if you just met.

Maybe I am not impartial being a fan, but a friend, commenting the show wrote "Only once in my life had I seen an equally seductive frontman: it was another time I had seen Depeche Mode". Would you disagree?

See you another time, promised Dave leaving the stage. I'm counting on it.

A special thanks to Depeche Mode for being what they are, and an incredible thanks to David for letting me be part of the project "Almost Predictable. Almost".

Setlts:Intro Revolution (The Beatles) Going Backwards It's No Good A Pain That I'm Used To (Jacques Lu Cont remix version) Precious World in My Eyes Cover Me Somebody In Your Room Everything Counts Stripped Personal Jesus Never Let Me Down Again
Encore: Walking in My Shoes Enjoy the Silence, Just Can't Get Enough