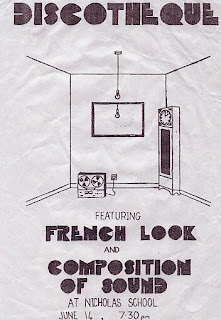 When you think of iconic venues Depeche Mode have played, there are a few names that spring to mind immediately. Dodgers Stadium, London Stadium, Waldbuhne and, of course, the Rose Bowl all stand out, each one a venue that Depeche Mode fans can spend hours talking about, no doubt debating whether the set at the particular venue was better because of Alan/no Alan or drums/no drums or Martin's solo set and so on. We've been there many times before and we don't need to go there again just now.

One venue that is rarely thought of as an iconic Depeche Mode landmark is Nicholas Comprehensive School in Basildon. Arguably, it is one of, if not the most important live venue in the band's history, because 40 years ago today, Dave Gahan first appeared live with Martin Gore, Andy Fletcher and Vince Clarke, performing lead vocals with Composition Of Sound, the band renamed as Depeche Mode in September 1980. 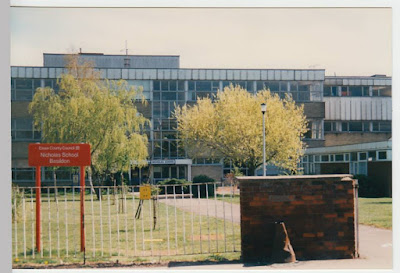 Nicholas Comprehensive School is now called the James Hornsby School following a merger in 1998. Martin and Andy attended the school, as did Alison Moyet. There can surely be very few schools that can boast as many global record sales as Nicholas Comprehensive and it's hard to think of any establishment outside Kling Klang Studios that has had more of an impact on electronic music. The school is proud of its connection to Depeche Mode and has erected a plaque beside its stage to commemorate the June 1980 gig: 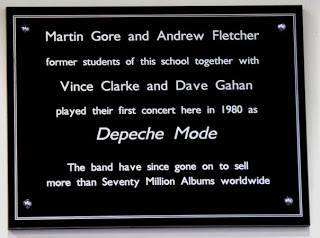 We can forgive the error about the name of the band who played the gig. Prior to the 14th of June show, Composition Of Sound had been a three piece consisting of Vince playing guitar or keyboards, Martin on keyboards, Fletch on bass guitar and a drum machine. Having famously noticed Dave covering "Heroes" in April 1980, Vince recruited him for the band, though the three piece version of Composition Of Sound did play a handful of gigs before Dave's debut, mainly in people's living rooms or at parties. Their final gig as a three piece was at Woodlands Youth Club. After that, Dave joined and took the job that he still has forty years later.

"I was on the committee of the Nicholas Old Pupils Association who were looking to arrange an event to promote the organisation. I said that some friends of mine had recently formed a band and were looking for opportunities to perform live. I assured the committee that the band were good and that people would come along to support a gig. So it was agreed to clear the large locker room out in Nicholas School to make a stage and set big enough for Composition of Sound."

Steve spoke about the gig in Simon Spence's excellent book Just Can't Get Enough too, saying:

"It was a ticket-only do and a load of the local yobbos who couldn't get in got a load of stones and went around smashing a load of school windows."

As anyone who has seen Depeche Mode anywhere will attest, that doesn't sound a million miles away from the atmosphere at the band's gigs now among the...erm...more devoted elements of the band's fanbase.

It seems the gig took place on the school's stage rather than in a cleared-out room. Deb Danahay kindly provided me the picture above which shows Nicholas Comprehensive School's stage which, as you can see, has the plaque I mentioned above to its right-hand side. Deb used to run an event that involved a walking tour of early Depeche Mode hotspots and the stage in the picture was included in that.

Martin was a busy man on 14th June as he also played in French Look who were the other band on the bill as you can see on the event poster at the top of this blog. The poster was designed by Vince's brother Rodney. I very much like the reel to reel tape player that it features, an at that point unknown nod to how that machine would feature in Depeche Mode's live sets in the next couple of years. The fact Martin played in both bands caused some tension between Robert Marlow and Vince as both wanted Martin to be in their band and thought he shouldn't be in the other one. Luckily Vince was the more persuasive of the two as, without that, I very much doubt this blog would exist. It may be the case that in some parallel universe French Look have just played two nights at the Waldbuhne to end an 18 month long world tour however. We'll never know.

After Martin changed from his French Look wear into his Composition Of Sound gear, the new four piece took to the stage and Depeche Mode were born. Sadly no recordings of this gig exist and no-one is certain what the setlist was. In his interview with the Depeche Mode Classic Photos & Videos Facebook Group, Steve Burton suggests that the set could have been along these lines:

Ice Machine
Virginia Plain (Roxy Music cover)
Mirror Is Standing
Television Set
Photographic
Then He Kissed Me (The Crystals cover) (NB - it's likely that instead of Then He Kissed Me, the song played at the 14th of June gig was Then I Kissed Her which would be a cover of the Beach Boys' reworded cover of The Crystals song )
Big Muff
Sunday Morning

Of the original songs performed by the band, there are no known recordings of Mirror Is Standing and Sunday Morning in circulation. Both were early Vince compositions and according to band associate Daryl Bamonte in Bong, the much missed Depeche Mode fanclub magazine, "no-one remembers" Mirror Is Standing and Sunday Morning was "performed maybe just two or three times and was performed in the style of a hymn-like chant." In Bong 24, the issue I've taken the quotes from, you can see early setlists, one of which is not too far from the setlist Steve has mentioned. Swap Virginia Plain for Price Of Love, a song that Composition Of Sound played around that time, and the handwritten list to the bottom right of the picture below may be the one from the 14th of June 1980. It's a longshot or course but you never know.

As the "hymn-like chant" of Sunday Morning ended (is anyone else thinking of the "oh -ee -oh" of Pimpf when they read that? No. Just me then), it's unlikely that anyone present at Nicholas Comprehensive School thought they had just witnessed the first steps of a band who would go on to be one of the world's biggest, most influential bands. It seems a long way from a cover of a cover of a Crystals song on a school stage to Just Can't Get Enough going Top Ten. From there it seems an even longer way to Everything Counts, Black Celebration, 101, Violator and so on.

So much that I love and so much that you love exists because of this concert and that is why Nicholas Comprehensive School, Basildon deserves to be mentioned alongside the Rose Bowl, Dodgers, London Stadium and Waldbuhne. After all, without it it's likely that those four names would mean nothing to us at all.