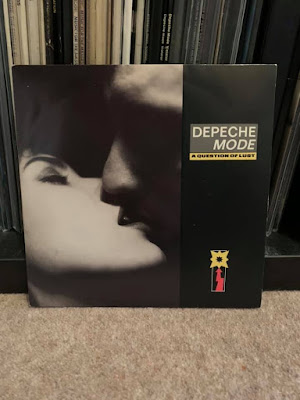 As Depeche Mode embarked upon their first full UK arena tour, a new single appeared. Like Somebody, this song featured Martin on vocals and, as we'll see, Dave was once again relegated to a Bez like role in the video.
A Question Of Lust would see the band fail to make an impact on the charts, release a single on a new format (Depeche Mode) and give us all the chance to almost see Martin naked.
What more could you want eh? Oh yes - Alan kissing someone on the cover of the single. Is it Alan though? Would anyone care? This is Depeche Mode - of course people cared. All this and more, though not in the Martin sense, will be revealed below.
ALL OF THESE THINGS AND MORE - A QUESTION OF LUST
The Single 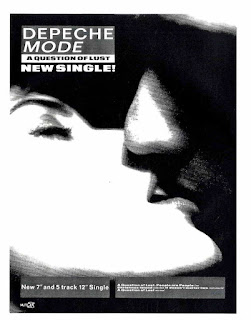 With unrestrained enthusiasm, the top of the third page of the April 1986 Depeche Mode Information Service newsletter said NEW RELEASE. It went on to list the tracks that would appear on the new single A Question Of Lust which was due to come out on 14th April. As with Stripped, BONG11 would appear on 7" and 12" and, repeating the Stripped trick, the 12" would be a 5 track affair though the running time was sadly omitted from the announcement.
Reviews of the single were relatively positive. Smash Hits said:

"With a "provocative" word in the title and a couple snogging on the cover, one would expect this record to be at least slightly "steamesque" and pervy. But no. They don't take any of their clothes off at all! Once the black electro clanks of the intro have settled down, we are presented with a floating, melancholic tune and a wheezing, breathy voice that's singing about "love" not "lust" (a word employed solely to rhyme with "trust" and "dust"). Moody and pretty but entirely saucefree. What a swindle!" 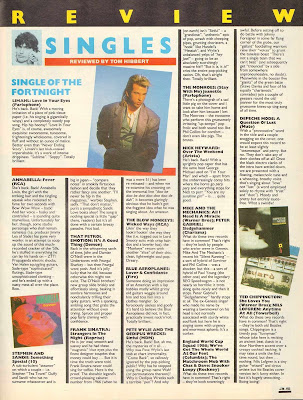 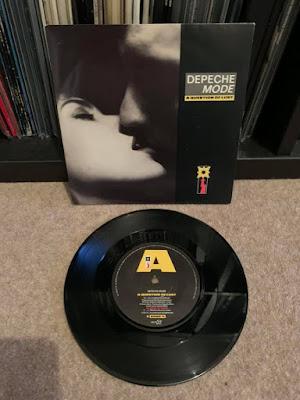 7BONG11 features the two tracks we mentioned earlier. The sleeve photo shows a couple kissing and one German fan was enraged, contacting German magazine Bravo to ask why this woman had been allowed to kiss Alan. Happily for her, the magazine did some pre-internet detective work and found it that it was a bloke called Gary who was embracing the woman (called Nikki incidentally). Whether Gary had a high hairdo and wore nothing but leather clothes from 1984-1988 was not confirmed. 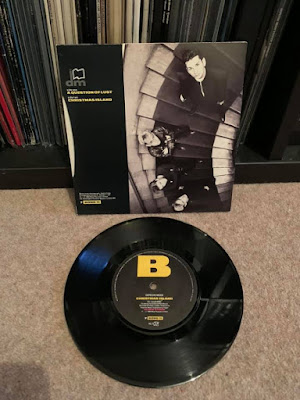 The rear sleeve shows the band on the stairs at Hansa Studios. I've been there and recreated that and most, if not all, of you who are reading this and have been to Hansa have done the same. Quite right too. The labels of the 7" are lovely with their big fat lettering and the logo appearing on the front and on the A on the A-Side label is one of the Black Celebration cover logos. The one with the arrow pointing to the explosion. I have no idea how that relates to lust or indeed questions about lust. 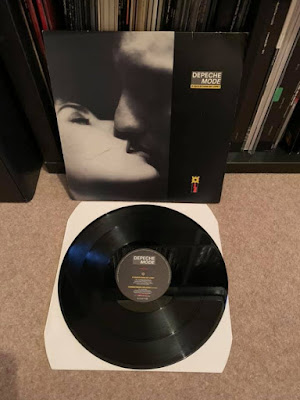 As I mentioned earlier, 12BONG11 is a 5 track affair. Side A (above) features the single version of A Question Of Lust and Christmas Island (Extended). As you might expect it's a longer, remixed version of the B-Side and very enjoyable it is too. 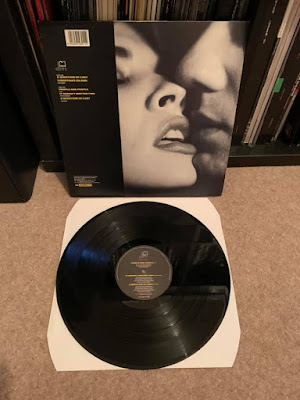 The B-Side artwork shows Nikki pulling away from Gary's embrace having just learned that he is only in fact an Alan Wilder impersonator. She had noticed that his socks weren't leather and quickly worked it out. There are three tracks on the B-Side. Firstly, a live version of People Are People from 30th November 1984 in Basle which is rather nice and that's followed by another Depecheoke special, an instrumental of It Doesn't Matter Two. I don't know how many times I've sung along with that. Finally, we have the Minimal mix of A Question Of Lust by Daniel Miller and Gareth Jones. 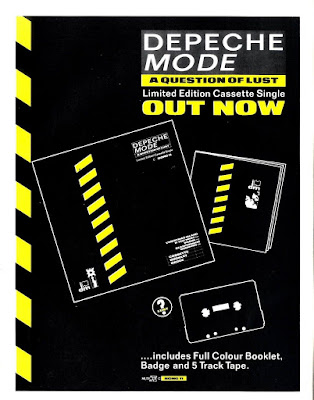 This advert appeared - what on earth was going on? All of a sudden, Depeche Mode had released a new format - the cassette single. Cassette singles weren't new of course. They'd been around for a while but at that point in time, they were fairly rare. The idea with a cassette single was that you could slip it in your pocket to pop into your Walkman. Never afraid to take on logic, Depeche released theirs in a packet slightly larger than a 7" single and stuck a booklet and a badge in too. 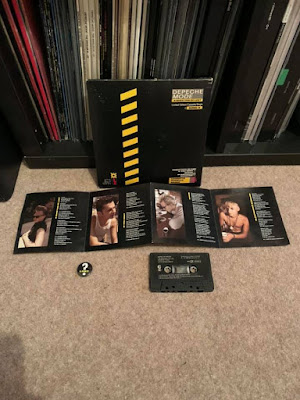 It's a really nice package. The front of CBONG11 features a checklist that confirms your cassette, booklet and badge are contained inside and it lists the tracks you're about to listen to. It also confirms that this is a limited edition. Side A features the wonderful Flood Mix of A Question Of Lust and Christmas Island. It should have been called Minimal Mix. Apparently Mute forgot to send him all the multi-track tapes so half of the single's sounds are missed off as he didn't have access to them in the first place. The "Full Colour 5 Page Booklet"  features photos of our heroes relaxing and Martin is of course naked from the waist up. The badge is a nice touch too, a question mark with the word Lust imposed over it. Finally, the lyrics to all five songs on the cassette (well four really - Christmas Island and all that) also feature. 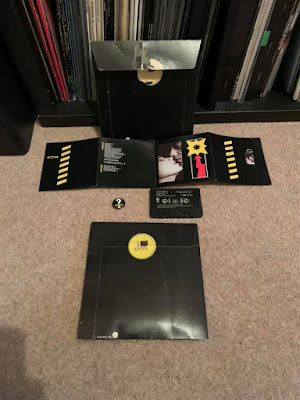 Yes, I have an opened one and a sealed one. What else did you expect? The pack is sealed with magical dM sticker which I ruined first time round when I was just a normal fan and not the oddball I now am collecting a stack of things I never play. The rear of the booklet is displayed above, The 3 tracks on the B-Side were all recorded live in Basle on 30th November 1984 - Shame, If You Want and Blasphemous Rumours. They are all ace.
Brilliantly, the Black Celebration 12" Singles box turned this cassette single into a 12". It is a magical thing and I wrote about it and photographed it here - click. 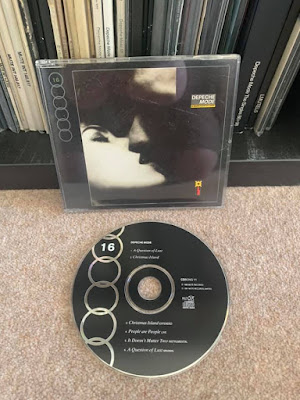 The single was given a digital overhaul in 1991 of course. It only features the 7" and 12" tracks. 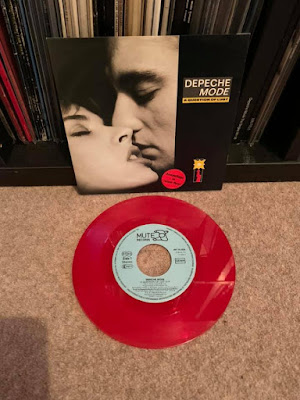 Did the Germans give us any coloured vinyl? Of course they did. First up, we have the red 7" 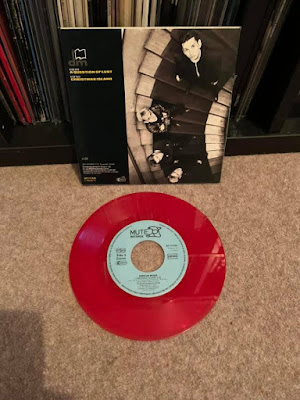 You know how it goes - same tracks as 7BONG11 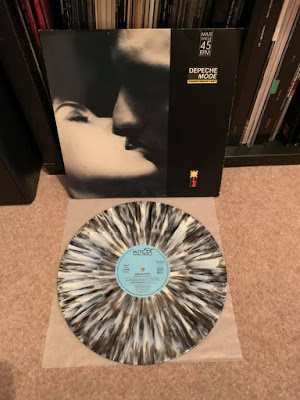 The coloured vinyl version of 12BONG11 is another marbled vinyl. The same tracks as feature on 12BONG11 populate its marbled goodness. 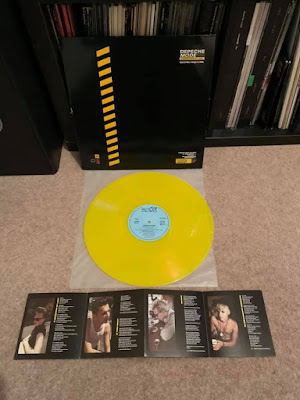 There was no cassette single in Germany but who needs a cassette single when you can have this outrageous yellow vinyl version? It is an absolute stunner. As the checklist on the front confirms, and as you can see yourself, it includes a booklet. They clearly didn't feel the need to indicate that it also included the record. There is no badge however. 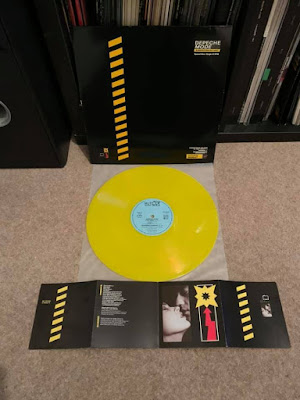 It features the same five tracks as CBONG11 with the A-Sides on the A-Side and the B-Sides right where you'd expect them. It's fairly hard to get hold of now and it'll set you back at least £120 on Discogs, 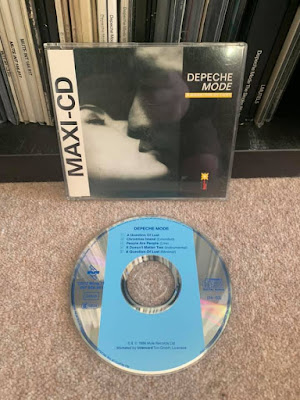 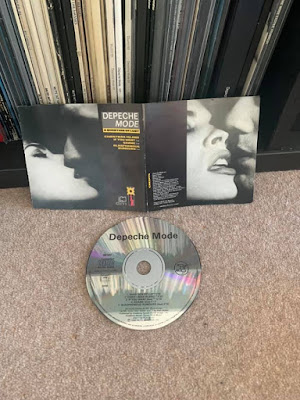 The French CD single was highly sought after for many years as, until 2004, it was the only place you could get your hands on a digital version of the Flood Mix. Even today it is still pricey - there is one currently on Discogs for £74 or so. 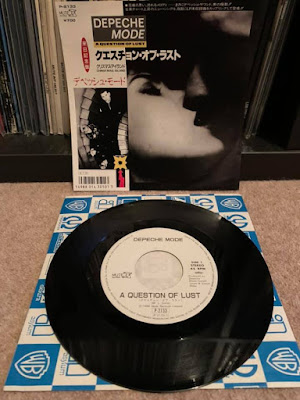 A Japanese 7" is available in standard and promo form, The standard one is pictured. It has a shiny inseet which shows the 7BONG11 front and back pictures on one side. 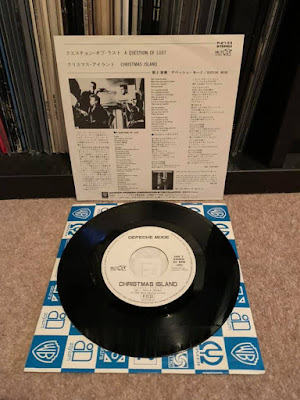 The other side features the lyrics and a picture of the birthday boy and his bandmates. 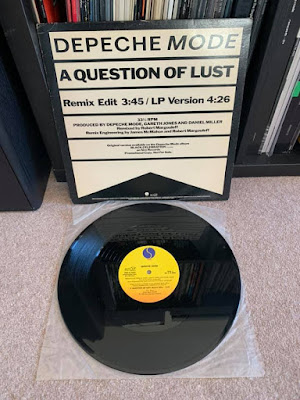 The single was only released on 7" in the US, though this promo 12" featuring an edited version of a Robert Margouleff remix appeared. A Question Of Lust then featured as half of a 12" when A Question Of Time was released in the US. 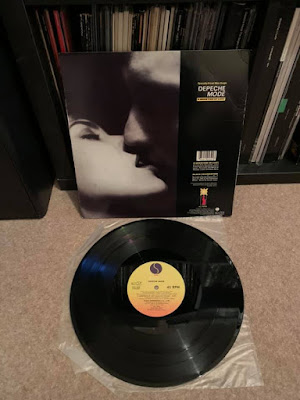 This is the rear of that 12". The only track it features from this single release is the Minimal mix of A Question Of Lust, wrongly named Extended Version here. 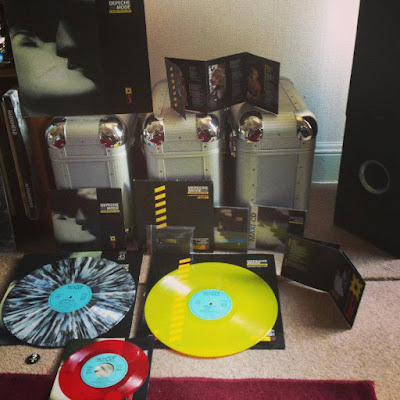 A Question Of Lust is an odd one really. It's a superb song but failed as a single. It had a nice new format and excellent tracks across all releases and has ultimately proved very collectible. It's turned into a much loved live song and it's one of my, many people's, favourite Martin sung songs.
This video was something of a landmark though. No, not because we nearly saw Martin's tadger, but because it was the last time for a long time that the band used anyone other than one director.
Enter Anton Corbijn. Next time, we'll have a look at A Question Of Time, the point that Depeche Mode suddenly gained visual credibility.
The usual videos section is about to get a lot shorter.
Posted by DJM at 15:22