After enjoying my first ever Depeche gig in Paris on Dec 3 (link), I would happily have stayed on for the next show on 5 December. Sadly, the realities of life and work sometimes have to be given precedence over Depeche Mode, so I had to head back to Glasgow. Sandrine Specia from Barcelona did go however and happily she reviewed the gig for the blog. Thanks to Sandrine for this great review and for the superb pictures too. 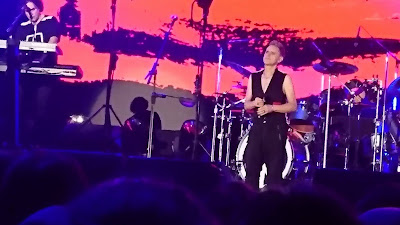 After the Olympic Stadium in London on a sunny day, and the Stade de France in Paris on a rainy day last summer, I started my European winter-leg tour in Paris on 5 December.

I’m now aware that this exercise is gonna be a tough work for me. If I could, I would write it like a movie scenario in my head. Depeche Mode has to do with the story but it’s not just about them. The soundtrack is also ready. I know who I would submit it to: Ken Loach (if I ever could contact him). I’m unable to write it though, so I'll just tell it. To put words on feelings, my own feelings, to structure and tell a 2-hour gig, then share them, I’m not good at it. I live the moment, that’s all there is. The next one takes place. It’s impossible to go backwards and live it over and over.

It has been a long very long wait that made me think I was living a dream that would never come true. I almost lost hope. My daily routine meant that the initial energy I'd felt knowing I was going to this show started to fade.  How could it happen? As Dave stated several times through interviews, “well, you know, life is made of ups and downs”. I was down, spiritually, physically. Life and its share of sad news meant I got so depressed, I actually believed that something wrong might happen and that I would not make the gig. 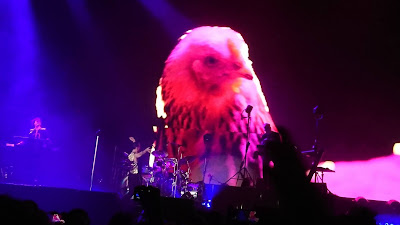 It was a cold, cloudy day when I landed in Paris on Sunday late afternoon. I couldn't attend the Sunday night gig, but was there in spirit with my “French David” who was there without me. I needed to be on the spot two days before the second-winter Parisian show to soak up the upcoming moment, and strolling around the Parisian streets, losing myself again, in my homeland. I’ve been living in Barcelona for 23 years and I always go back to Paris to see them.

It might be a cliché saying it, but DM music is the soundtrack of my life, although I do understand it is for so many devotees.

Depeche Mode music is my personal drug, an intravenous painkiller injection for each listen. Some particular songs have different functions, comforting, tranquility, relaxing or just to give me a boost. Some say DM’s music is dark and sad, but I’m the kind of person who gets depressed because the sky is grey. Paradoxically, I feel comforted by Dave’s voice, so soothing, sometimes acting like an anesthetic. Indeed, an excellent and healthy anti-depressing medicine. Healing lyrics in order to relieve the pain. What pain? I don’t know … the world we’re living in and life in general. 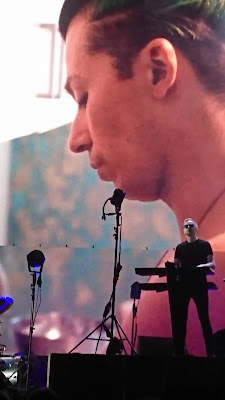 This gig was what I deeply needed, as soon as possible. I know I’ll have my head in the clouds. I won’t be the everyday me but more myself. For two hours. I don’t know who is the real me, but she’s happy and joyous - this is priceless.

During a disappointing and fairly useless Early Entry experience, the fortunate among us spent our exciting waiting time sat on the cold floor inside the hall of the venue. DM was in the heart of all the conversations around, best live songs, number of shows attended, years of devotion, favorite tours … Once we came into Bercy, we decided to head to the end of the catwalk where Dave comes and greets some lucky fans, touching their hands. My French friend David finally joined us and all in a sudden …. I’m hanging on your words, living on your breath, feeling with your skin, will I always be here? I think he doesn’t know but he’s my Personal Jesus by just being close to me. As a die-hard fan, he’s immediately able to detect every single lyrics mistake that Dave may make. Shit happens. Dave got the words wrong during Precious. 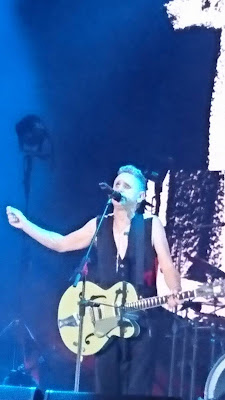 I had heard comments that Re-Tros would properly warm up the show. I never heard about them before. Thirty minutes of a weird stuff to my ears, a sort of experimental music.

We watched the clock so many times it felt like we were stuck in a time-warp, feeling like the moment would never end.  In reality though, thankfully, we were closer to our beloved band acting.

How do I feel 15 minutes before DM takes the stage?

My soul is on fire

By a higher love

… The lights turned off and the Beatles’ Revolution resounded, announcing Depeche Mode. The crowd welcomed the band with screams, applause and whistles.

I think I’ve been tele-transported to another dimension, with all the DM community. This is what we are. Not a random bunch of fans. We become one.

I couldn’t yell their names, I never do. Martin, Fletch, Peter and Christian took to the stage the air filled with the shouts of joy of the Parisian room.  At this point, I cannot even scream their names as the others did, or scream my happiness (no one would hear me !!!), no, I applauded and I raised my arms up making the V of victory. As the first notes of Going Backwards rang out, I know that we will enter into communion. We all waited for the master of the place, we were all in master-slave mode. 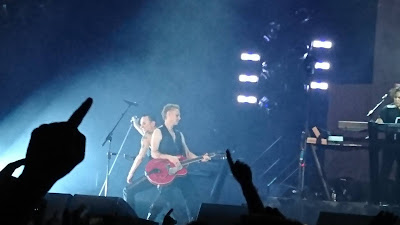 Dave, since the beginning of the tour is generous, smiling, happy, grateful to his loyal audience. He seems totally fulfilled on stage.

I’ve followed the American tour on FB, and what a disappointment when the European tour resumed without "Heroes". I fell in love with this delicious and poignant cover, I was dying to listen to it live again.

It was a pleasant surprise for me to hear several Ultra era songs, it’s my favorite album.

Judas, performed only with piano and voice, thrilling. However, it can't beat the Devotional Tour version.

Somebody has also been skipped this day in favor of Sister of Night. Beautiful but boring. This song works far better with Dave's warm and mesmerizing voice.

Policy Of Truth doesn’t move me anymore musically speaking, but it's an opportunity for Dave to revel in his incomparable sex appeal, playing with the mic like he’s doing pole dance. 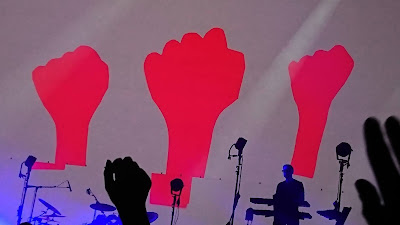 He always tries to speak few French, with "ça va?”, or "merci!" and it gives him a sort of shy mood that I like. He who always seems so self-confident.

I confess that I do not really enjoy on Enjoy The Silence on this tour. This is a hymn for us, I think it lost a lot on this tour, by dint of too many updates for each tour, it is less punchy although it still causes the same enthusiasm among fans. It is a must-have in their concerts. I am nostalgic for the version of Devotional or WVT.

A Question Of Time that had been zapped altogetherduring the summer tour was very welcome this winter, an opportunity to jump and sing it our lungs out altogether. That's what I thought. Four years ago, we all jumped in unison. The choice to perform it at the end of the concert is definitely not the most judicious, we do not have more energy after 2 hours for most of us, or the first 20 seconds, in particular for those who have been in line for hours to rush the first rows.

We left Bercy (people still call the venue by its old name) with stars in our eyes, we could have lighted on the Ville des Lumières.