This review has been written by Thomas Ostermann, a chap who has seen more Depeche gigs on this tour alone that I have in my entire life. Thomas takes us on a trip through his Depeche Mode life from his early days as a bootleg collector up to the Schleyerhalle gig on 28 November. He's been to more gigs since then of course including Paris on 3 December when I happily had the chance to say hello to him. Thanks for this Thomas and thanks for the superb pictures too. 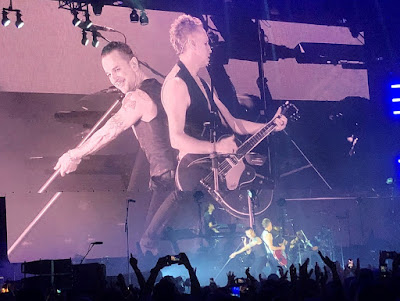 Depeche Mode live Stuttgart: from "A Break In Stuttgart" to the Global Spirit Tour

Let me introduce to myself: my name is Thomas Ostermann. I live in Germany near Frankfurt and I am hopelessly devoted to Depeche Mode. My first contact with Depeche Mode was in 1983 by a tape which my older brother copied to me. I was impressed by a song and years later I realized that it was my all time favorite Everything Counts. In 1987 I got my first record of Depeche Mode at Christmas: it was the blue vinyl of the Intercord Release of Music for the Masses. My first concert of Depeche Mode was during the World Violation Tour in 1990. I visited the show in Hannover (9th October 1990). It was a sunny Tuesday in October and I will never forget this day.

The beginning of the end:

After my first show I was so overcome I couldn’t remember what had happened. Which songs had they played? What was the order of the songs? And how amazing was the version of Everything Counts? In those days there was no internet, no Facebook or YouTube where you could watch recordings of those shows. I loved the versions of all the songs, but there was no chance to listen to them again. But in 1991 the unbelievable happened: a German record company called “Disc-Center” sold an double CD with a recording of the tour. The album Une nuit a la mode was a recording of the World Violation show the band played in November 1990 in Milan. The quality was not the best as it was an audience recording, but for me it was the beginning of a never ending love. In 1992 I started to collect recordings of every show Depeche Mode played in the past and I ended up with nearly 500 tapes from different shows in different qualities. Every year I tried to listen to one of those tapes on exactly the day when the show happened. I think I would have been a great nominee for the German TV-Show “Wetten dass?!?”. I could listen to 5 seconds of a tape and tell everyone, which tour, which date and which city it was from.

But the most import question is: what has this all to do with a review of the show in Stuttgart last week? Back in my tape collecting days, I received a recording of the World Violation show (15th October 1990). The highlight of the recording was a power cut during Shake The Disease. The complete PA was down and Dave sung the song acapella with the audience. Later the show was released on a bootleg CD called A Break In Stuttgart. Both items (Tape/DAT and CD) are still in my collection and while writing these lines I feel the to listen to it again.

Stuttgart in the 80s and 90s was the German home of Depeche Mode because their record company Intercord was located there. For me and my friends it was our duty to get to this arena and city on the all tours. During the Devotional Tour, I visited the Schleyerhalle in Stuttgart for the first time. It was an amazing show and I will never forget the moment when Dave pulled a fan out of the audience with words “I see this guy every night”. Does anyone knows the guy? 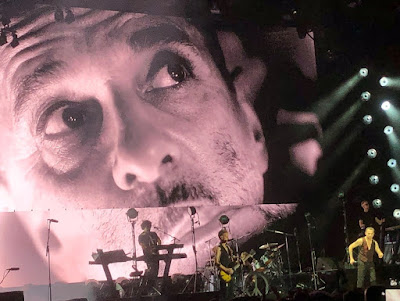 On the following tours The Singles Tour (23 September 1998), Exciter Tour (03 October 2001), Playing The Angel (9 March 2006) and Tour Of The Universe (8 November 2009) I always went to Stuttgart to see Depeche Mode in the Schleyerhalle. On the Delta Machine Tour, Depeche Mode played for the first time in the Stadium “Mercedes Benz Arena” and had no show in the Schleyerhalle.

The show in Stuttgart was my 37th show of the Global Spirit Tour. I arrived at the arena at 7 pm and met some friends. When we entered the arena we tried to reach the Front Of Stage Area. The support act had already finished their show and the DJ set was still running. But there was no entry. The staff told us that they had no wrist bands left and so we couldn't get into the Front Of Stage area. The organization was unbelievable: about 100 people had tickets and got no entry? After a while they got a few wristbands and we could finally enter the area. Unfortunately the Front Of Stage section was too full. Ticketmaster sold some spare tickets a few days before the show. Perhaps not just to make not only a lot of money but to make tons of money instead? 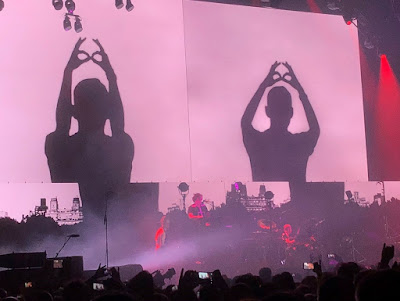 The show started a few minutes later with the first intro of the The Beatles Revolution and then the Cover Me intro joining Going Backwards. It's No Good was very powerful and Dave welcomed the crowd with an emotional “Good evening, Stuttgart”. The rest of the show was the standard setlist of the winter tour. Unfortunately the band played Halo only during the Dublin show.

The sound was very powerful and clear, but the crowd was in my opinion very boring. I finally saw movements in the Front of Stage section during Everything Counts. I heard some other opinions to the show, but I think it is often a personal point of view.

Finally I was happy to visit this show. In the end it was a solid performance of the band, but not my personal highlight of the current tour. 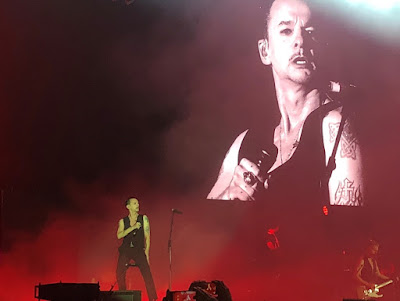 Setlist:
Into
Going backwards
It’s no good
Barrel of a gun
A pain that I am used to
Useless
Precious
World in my eyes
Cover me
Insight
Home
In your room
Where’s the revolution?
Everything counts
Stripped
Enjoy the silence
Never let me down again