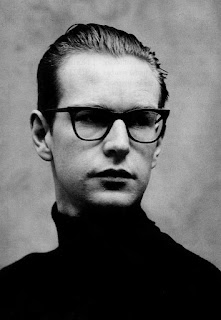 When the news about Andy Fletcher's death broke last Thursday, it is fair to say that every Depeche Mode fan was left stunned. For all of us, the last few days have had a shadow over them as we come to terms with this. Memories have been shared on social media, friends have got in touch with each other to see if they're ok and tributes have poured in from the numerous people Andy's life touched. It is not often that someone is universally considered to be a good guy. Fletch was one of those people.
Look at all the band and music industry types who have offered their condolences or tributes for example. While Dave and Martin may be the members of the band with the higher profiles, Andy's role, often understated by many, was obviously a key one, not only in Depeche Mode but also in the way he advised and nurtured other artists and young acts. When Kevin May and I interviewed people for Halo, every person we spoke to talked fondly of Fletch from his key role in the production process, where his input and comments were vital, to talking to and being there for support bands on the tour.
There is no getting away from the fact that without Andy Depeche Mode would almost certainly have ended years ago. When asked what he did during a radio interview seen in 101, he famously said "I bum around" but he did much more than that. As Martin's best friend, he was vital in keeping everything together, a crucial mediating voice in the band especially in the post Wilder years where Dave started pushing for more songwriting involvement.  He had the best job in the world; he was the biggest Depeche Mode fan there is and he got to be part of the band.
While the last few days have been overwhelmingly sad for all of us Depeche fans, it's impossible to imagine how Andy's family, Martin, Dave and everyone associated with the band must be feeling. The fans are all mourning the loss of someone who has been part of our lives from the moment we first got into the band but those close to Andy have lost something much more than that.
I was determined not to make this post go on and on about how sad I am and how sad all Depeche fans are because what we are all feeling is inconsequential compared to the feelings of people who actually knew Andy. Instead, let's end on a few Fletch highlights. These are some of my favourites but there are of course many, many more. Rest in peace Fletch - you were a one off.
Firstly, 3 from 101 though there are many more to choose from:
1. Fletch tries his hand at guitar playing
The scene in Nashville where Martin and Andy visit a guitar shop is superb. Andy picks up an acoustic and strums a few bars. "Impressive," you think, "I didn't know Andy had it in him." Then Martin arrives, plays what appears to be several tunes at once and Fletch heads back to the transport outside. For God's sake Martin, stop showing off. 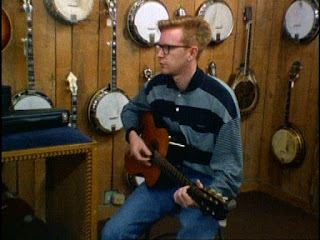 2. "People are people so why should it seem....."
"Well, you got three of the words right."
3. "I'm Andy Fletcher from Depeche Mode and you're listening to the alternative dance party from hell"
From elsewhere:
1. Andy drinks a cocktail in the Just Can't Get Enough video - seriously, how happy does he look? That was a man who knew he was about to give up the day job and spend his life doing something much more fun.
2. Fletch gets his kit off, Rock Werchter, 7th July 2013
Anything Dave can do, Fletch can do better. Or something.
3. The Fletch dance.
You know the one - clap, grab your mic, wave, walk around the keyboard and repeat. See 101 and The World We Live In and Live in Hamburg. For later years, see The Fletch Arm Lift.
There are of course many, many more examples. Fletch brought a sense of humour to Depeche Mode and that was crucial as it offered a counterpoint to the other sides of the band. He brought so much more to the band too of course and that's what we are all missing today and will continue to miss for a very long time.
Thanks for everything Andy.
Posted by DJM at 15:47 14 comments: 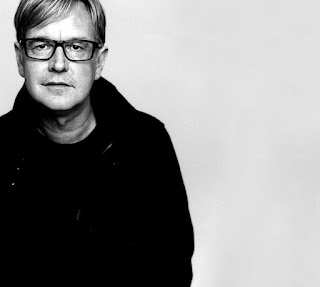 I'm writing this in a dazed state having just heard the horrible news about Fletch. Most if not all of you will be feeling the same just now. It's beyond shocking and impossible to comprehend for now. The band's official announcement was made earlier this evening: 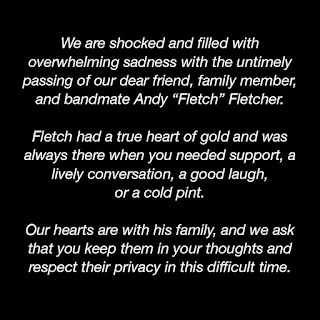 All of my thoughts are with Andy's family at what must be a terrible time for them.
Thank you for everything Fletch. Everyone from every corner of the Depeche Mode world will miss you terribly.
Posted by DJM at 20:50 5 comments: