A MOMENTO-OUS WEEK - AND MUCH MORI TO COME

It's been quite a week.

Last Thursday (29th September), Halo - The Story Behind Depeche Mode's Classic Album Violator, the book I have written with Kevin May finally came out. It was a surreal day which was spent receiving lots of good luck messages from around the globe and seeing photographs of the book actually in people's hands. It was a real thing at last and the day was a remarkable experience. Thank you to everyone who asked about it, shared info and bought the book. You are all lovely. Kevin and I can't thank you enough. 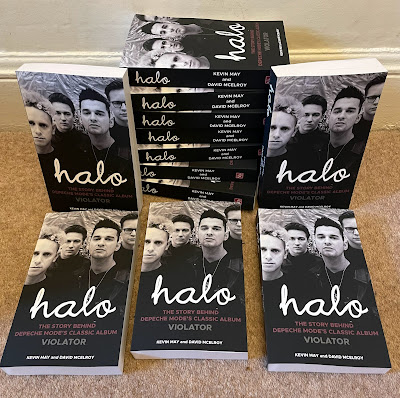 One of the most surprising things about the book has been the requests for a signed copy. It's not something I've ever bothered with so I suppose I didn't think anyone else would. Loads of people have got in touch about one which is superb though the limited stock Kevin and I have only went so far. Rough Trade advertised the book on their social media and promised signed copies. When they told us they'd sold 51 and needed 100 in total, that presented something of an issue as we didn't have anywhere near that may books. We also live around 400 miles apart so that meant we couldn't just pop next door to sign things. There was only one thing for it - a trip to Newcastle.... 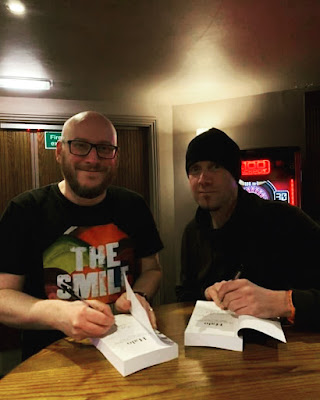 Kevin and his daughter Ella had gone to Newcastle to have a look at the University so I headed down from Glasgow. We met up in a pub, signed 30 books plus 100 bookplates for Rough Trade, posed for Ella to take the first official author photo and then we went our separate ways.
Oddly, no-one in the pub batted an eyelid. If this had been Glasgow, we'd still be there answering questions now.
Becky from our Publishers got in touch on Monday to confirm that sales since release had already exceeded 1000. By this point, everything seemed surreal really.
Then this happened: 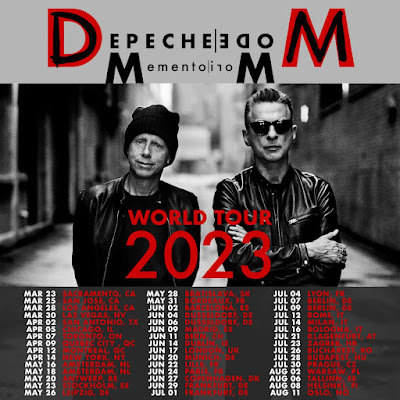 Here we go again then.
Seeing Martin and Dave at the press conference was cool though it delivered far less than it promised really. That said, hearing them talk about Andy then and in the subsequent interviews released since was genuinely moving. We'll all miss his presence on the tour, but not as much as Martin and Dave will.
Memento Mori will be out in March next year and we will all then start heading around Europe and the US taking in the gigs. It's been fun watching the various stresses, strains and joys people have gone through over the last few days and I'm really looking forward to my Dublin, London and Berlin trips next Summer. It seems there will be a further leg or two to follow so I imagine those three are only the start as far as my next tour is concerned.
The Depeche Mode machine has started up again the but this time agains the personal background of having released a book about the band. That has made the week even more unusual as Kevin and I find ourselves in a Depeche spotlight of our own making just when the band return.
What's next then? Well, more book promotion with apologies to those already bombarded with it on social media and the preparation of tour plans.  Until this week, Kevin and I were regularly asked what the next book will be. That has temporarily changed to questions about whether or not I will replicate the Global Spirit Tour Project on this blog and a lot of people have already very kindly volunteered for the role of reviewer.
On the basis that a review project has to be easier than another book, it's time to say yes. The Memento Mori Tour Project will start next March.
What have I done.....
To order Halo, go here for a list of all online worldwide retailers:
https://halotheviolatorbook.com/buy/
Posted by DJM at 18:45 1 comment: 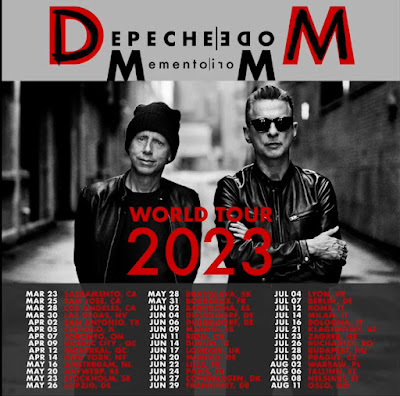 After a few weeks of speculation culminating in a frankly frenzied 24 hours when Clash magazine went a day too early with an online article, Depeche Mode have now confirmed some details about their new album and the tour in support of it.
This afternoon in Berlin, Martin and Dave appeared at a press conference moderated by Barbara Charone. Sadly, she didn't do a very good job of it but we got plenty of new information anyway.
It opened with video of various pieces of equipment and Martin and Dave bobbing about in the studio with what appeared to be two new pieces of music soundtracking it. The first was a very electronic track with layers of processed Gore sounds swarming over it. Very nice. The second was a new song featuring the lyrics "Heaven's dreaming" and, I think, "We all end up ghosts" sung by Dave. The music was a combination of the usual Martin guitar twang and very poppy electronics.
When the boys appeared, they both looked and sounded fairly sad as you would expect. They mentioned Andy of course, talking about how much they miss him and how they keep expecting to see him. Martin mentioned walking past the hotel bar in Berlin when they arrived in the city and looking in there fully imagining he would see Andy there with a beer.  It must be very hard for them to do this without him.
The album is called Memento Mori and will come out in late March 2023. They didn't use the word "produced" but talked about James Ford being involved so we can I think presume he has produced it once again. They have recorded at Martin's studio in Santa Barbara and at Rick Rubin's studio albeit without his involvement. The band will now return to New York to finish the album.
The album was planned and started before Fletch died and that includes its title which Martin selected.
The tour dates have been announced too and most go on sale at the end of this week - check depechemode.com for details.
It's great to see them back and I really hope the album is a cracker. I'm pleased that they have finished off the plans they made when Andy was still alive as not only will the album and tour be a tribute to the great man but it will also allow fans to get together and properly celebrate his life. I'm looking forward to doing that and I look forward to meeting up with you all at a few gigs next summer.
Welcome back Depeche Mode.
Posted by DJM at 12:47 No comments: