It seems a very long time ago that I met up with Sean Salo in Stockholm after the first concert on this seemingly never ending tour. Sean has been kind enough to review a gig for the project before (Uncasville - I see I was talking about it being a long time since this all started even then. I need new lines) and I was delighted he volunteered to review the Brooklyn show and here is his unsurprisingly excellent review. Thanks very much for this and the pictures Sean. See you some other time... 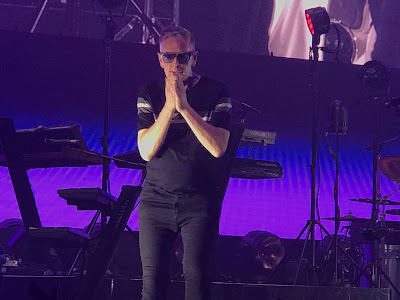 The Global Spirit Tour has been the longest tour for Depeche Mode since Devotional, more than 25 years ago. I can only imagine how it’s taken its toll on the band, as it has with their aging fans. The idea of multiple shows over a few nights is exhilarating…and exhausting. It’s no wonder that the band shifted the touring pattern to no back-to-back shows. So, with nothing to base this on but speculation and inferences, I’ve resigned myself to the fact that this may be the last tour for Depeche Mode. This is why Dave’s proclamation at the end of the show, “See you some other time,” instead of the well-worn, “See you next time,” felt like a bit of a dagger to the heart.

Having attended the week’s previous show in Philadelphia, I knew what to expect at Brooklyn, but a hometown show – for both me and for Dave – adds to the experience, of course. My friends Carrie, Steve, Jason, Kristin, and I had gone all in on the Ticketmaster Verified Fan pre-sale, and decided on the tickets within the first few rows, having secured sixth row seats. (Referring to them as seats is a misnomer, as I spent scant time in them – sitting for a few moments between opening act, EMA, and the opening riffs of The Beatles’ Revolution.) Regardless, the floor real estate we’d rented for our feet was in the sixth row.

Backtracking a bit, my friend Jason had flown to New York to experience his second show of the Spirit Tour in my fair city. We, along with another friend, Sarah, met up earlier in the day to experience the “David Bowie Is” exhibit that’s nearing its conclusion at the Brooklyn Museum. With DM having retired “Heroes” from the setlist, it was a great way to keep the spirit (pun intended) of Bowie present for me as a part of the DM experience. For those of you who’ve seen the exhibit in any of its stops around the world over the last several years, you know how special it is. And while DM aren’t cited within the exhibit, it wouldn’t have taken much to realize a solid line from Bowie to Gore and Gahan in an influence diagram. I can think of no better way to have mentally and emotionally prepped for the remainder of the day. Following a late Bowie-themed menu lunch at the museum, I headed over to the venue to prep for the pre-show reception that was part of the VIP ticket package.

While those of us in North America may gripe about the prices of the VIP packages, the ease of doing so and the sanity of entering the venue early, the pre-show dinner reception, the hassle-free merch shopping, the unique merch items included, and, of course, the location in front of the stage make it very comfortable for those who have the means and the willingness to spend the cash. Whether it’s a smart purchase or not remains to be answered by the individual spending it. I am happy I went with the VIP package this time around, but my wallet is happy that the Global Spirit Tour is nearing its conclusion. 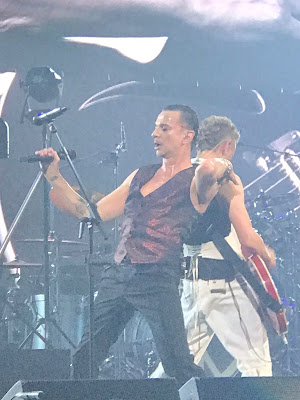 Following the show, throngs of attendees descended upon the Kings Beer Hall for a packed DM New York Fanclub afterparty. The German-styled beer hall had the tables largely cleared to make way for the swarms of black-clad revelers. I was able to meet up with other fellow DM Facebook Takeoverees face-to-face, as well…an added benefit. 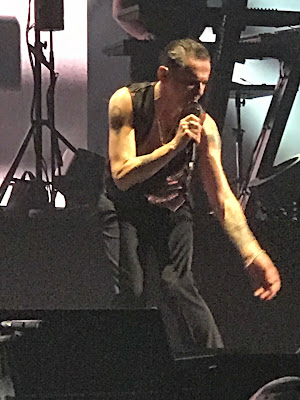 There isn’t much to say about the setlist that hasn’t already been said. However, as much as it pains me to admit this, having seen the shows in Philly and NYC, the energy builds really well with the current set. And I was happily surrounded at both shows with big fans who were on their feet for the duration and belting out all the lyrics along with me. As I mentioned at the top of the review, Dave’s exclamation of “see you some other time” stood out. This is a subtle, but seemingly meaningful, shift from the standard, “See you next time.” We can all speculate what the twist means, and I have my strong suspicions about what it portends. But I have enjoyed the ride these last 32 years of seeing DM live. Then again, the band has outlived rumours and speculation about their longevity for decades. So whether ‘some other time’ is later this year, the year 2021, beyond, or never again, I can imagine no better way to have leveraged my retirement security and my kids’ college educations than with the dozens of live shows I’ve seen with the band.