For the first time on this project business, we welcome Marcel de Groot who is your reviewer for the Boston gig. Marcel has been very involved in the project however as he managed to save the day in St Petersburg when it looked like we'd have no reviewer at all by lining up Jan Ronald Stange to cover the gig. Marcel was over in America and Canada undertaking a mini US Depeche tour with and I was delighted when he offered to cover Boston. Here is his wonderful review together with his amazing photographs - view the full set on his Flickr page here. Thanks Marcel. 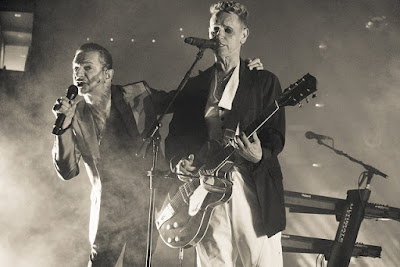 A European in Boston

What can I say, my second North American leg and I find myself in Boston for my second show in this leg. There are shows and then there are SHOWS, Boston clearly fell into the latter category!

After I had seen the show in Chicago, where the crowd was a bit flat (but the band was in fine form!), the crowd in Boston was on it from the word go! Loud, enthusiastic and that fed back to the band. It really goes both ways, the band feeds of the crowd and vice versa. The singalongs were pretty good for North America, though they don’t compare to the ones in Germany and Italy!

We (Amanda, Tara and myself) had managed to score our front-row VIP packages when the pre-sale opened and this was the only show for us with no hassle and stress with regards getting the tickets we wanted (I am still annoyed that I had three dead centre front row tickets for NY in my cart and Ticketmaster got stuck in a loop whilst verifying, meaning I lost them), so we enjoyed our food and drinks, caught up with old friends and made new ones. Apart from seeing the band play, this is an important part of what makes going to a show so special, we have all made so many friends over the years and around the shows is the time we get to meet up with them!

This was the second show I attended on the second North American leg, Chicago first (and finished it with the Toronto show) and my 12th of the Global Spirit Tour (the only leg I have seen not shows in will be the South American one).. As most of us know the set list doesn’t really hold any surprises anymore but the Martin songs can change and for this leg he brought back The Things You Said after a 30 year absence which I, and the rest of the crowd, thoroughly enjoyed! 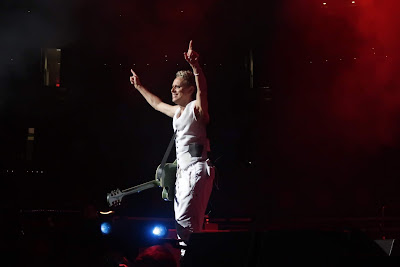 As with my previous show, Chicago, I didn’t really get to see much of the opening act since I had friends to meet up with before the show started. That’s a notable difference with the European shows where you have far less opportunities to do that if you’re on the floor and want to hold on to your front row spot. 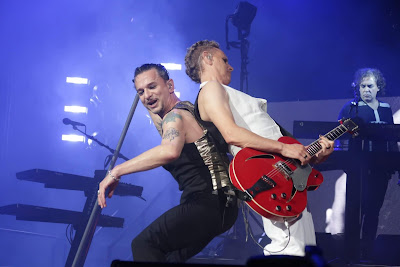 The Depeche Mode show itself was a good one, no surprises in the set list or the performance. The one thing that was clear to me though was that the break between the South American leg and the second North American leg did the band good, the energy levels were back to those at the beginning of the tour! Being in the front row is always the best way to be noticed by Dave, and it helps a lot if you’re next to Tara. At one point Dave looked straight at the three of us in succession and that’s always very cool to experience! 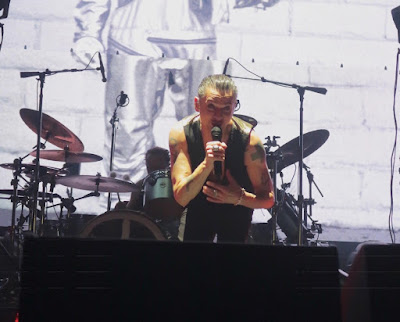 The thing that made this show stand out to me was that I was able to talk to a few band members after the show in a hotel bar. After having met Dave last year, I now was able to meet Fletch, Peter and Christian (I talked to Martin at the after-show in Toronto thanks to Tara, see her review of the Toronto show for more on this). I’d never imagined when the tour started that by this time I would have met all the members and talked to them and been backstage as well! This seemed to be something that was forever out of my reach and yet here I am!

It’s amazing to think that the first show I saw in my Global Spirit Tour was over a year ago, Amsterdam May 7, and they’re still going strong. Festival season is upon us and the tour will end with two shows at the Waldbühne in Berlin, which I am lucky enough to attend bringing my total to 15 shows (without hurricane Irma it would’ve been 17). Of these 15 shows, only three of those I attended ‘on my own’, the power of Depeche Mode to bring people from all over together is a force for good. I have waited in line in all kinds of weather, from just above freezing for the second Amsterdam show to the 35C+ weather in Italy or watching the show at the Olympic Stadium in Berlin in the pouring rain but having friends there to help you get through the ‘suffering’ makes it a lot easier to get through.

This tour has been an amazing experience both during the shows (hearing the new version of Everything Counts, Cover Me) and I wouldn’t have wanted to miss any of it. Bring on the next tour!