Another review, another new reviewer. Jessica DeBiase Stevens, who is a fellow Depeche Facebook Takeoveree, was at the Wells Fargo Center in Philadelphia on 3 June to take in another huge and hugely well received Global Spirit Tour concert. Jessica had a tremendous spot right by the catwalk and, as you'll read, she got very close to Dave. A great read - thanks for this and for the pictures Jessica. 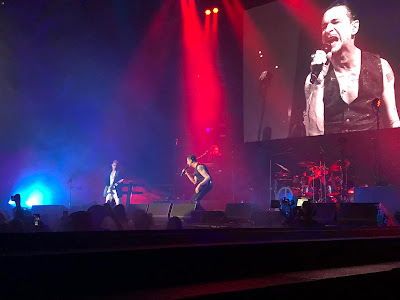 I was beyond excited to attend the Depeche Mode Global Spirit Tour stop at Philadelphia, PA on June 3rd, 2018 – my 10th show on The Global Spirit Tour. As a central New Jersey native, I always would attend the DM tour-stops in the tri-state area with my family: New York, New Jersey, Pennsylvania …and sometimes do the longer trek down to Washington, D.C. too. It was a family bonding event that started when I was 12 years old during the SOFAD Tour. Since then I have attended every single tour (multiple shows), and my family has moved out to the west coast to retire – so I typically attend the east coast shows with my husband, and west coast shows with my parents. The family will all unite in Berlin on July 25th for the final show of this tour – a fun surprise Christmas Gift.

However, tonight – I decided to take one of my life-long best friends, Candy Brink, who has been a fan of Depeche Mode, but had never seen them live in concert. I was thrilled to take her to her first show, and experience Depeche Mode through her “newbie eyes” with floor seats, row 7 directly next to the catwalk!

It was a cold dreary day in Philadelphia for early June, and the rain certainly put a bit of a damper on our plans to unite with other friends going to the show with a traditional pre-concert tailgate. Instead, we all met at the venue around 7 pm to catch up over a few drinks. Unfortunately, we all decided to pass on the opening act, EMA – which sounded pretty good from the bar area we were at.

Around 8:30 pm we headed down to our seats and lined up around the catwalk eagerly waiting for the show to begin. The lights went down around 8:40 pm and The Beatles Revolution began to play. There were no major changes to the setlist that the band has released for this leg of the US Tour – but here are some notable experiences and highlights from the show:

1) Going Backwards – in particular, there was a noticeable divide in the arena on the engagement during this song. It’s tough to figure out if it was purely because it’s a new track from the Spirit album, or if it is echoing the continuous political divide happening in the USA. Regardless, there were fans around us expressing and shouting how there needs to be a movement for change! 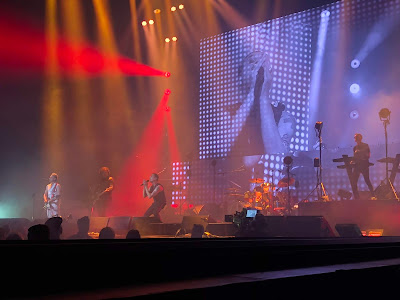 2) Useless – since the LA shows back in October, it’s been a warm welcome to see so many Ultra tracks added to the setlist. I really enjoy the addition of Useless, and the visuals up on the screens really add an extra element to the live experience. I think Ultra gets a lot of love on this tour because the album plays well in a live atmosphere….maybe one day they will modify or add in The Love Thieves, and then my life would be complete! Anything is possible, since I’ve seen Martin sing Insight during a show!

3) Cover Me – This is by far my favorite song from the new album. Dave’s energy during this song was contagious – this is when the enthusiasm and passion in the arena shifted and the fans were fully committed to becoming Dave’s slaves for the rest of the show. The minute he walked down the catwalk he was screaming and getting the fans all riled up to clap. I completely melted when he grabbed my hand while saying hello to me and all of the fans at the end of the stage. I was also able to snag some great shots of him floating like a ballerina/swan at the end of the catwalk. You can tell he is quite passionate about this song and wants a loud and positive reaction from the audience (which obviously the fans were going wild). 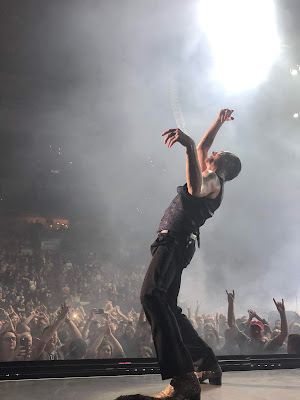 4) The Things You Said – this was the first time I have ever seen this song live, as it has not been played live since the Music For The Masses Tour. Another great surprise was that it wasn’t the acoustic version. Nothing wrong with acoustic versions of songs (as Martin’s voice is STUNNING) but you need the backing track to make this song come alive! Martin’s voice is incredible – and my friend Candy said she was blown away by the pipes on Martin!

5) Everything Counts – during the last two minutes of this song, Dave came out to the end of the catwalk to encourage fans to sing the chorus “The Grabbing Hands, Grab All They Can….Everything Counts in Large Amounts” – I was able to snag a video of this, with Dave holding the mic out to the audience then putting it down by his feet to hit the beat while stomping on the stage – you can hear him screaming while pounding his chest – I was actually surprised how much my iPhone 8 mic picked up during this moment. Apologies in advance for me screaming out to Dave like a child – but I couldn’t help myself! Candy and I caught his attention and he looked at us with a huge smile and laughed - and I felt like I was going to pass out. Incredible experience!!!

6) Stripped – at this point in the setlist, Dave started to actually look a bit tired, and his voice sounded a bit strained and cracking. Martin and Peter helped step it up and was louder than usual with the backing vocals. Again, I’ve attended quite a few shows on this tour, and this was the first time I saw and experienced Dave in this state. In his defense, we are having a very terrible allergy season on the east coast – and I don’t think the average fan would have noticed. As soon as the song ended Dave took a swig from his thermos, gargled and kept drinking. I also noticed he was clearing his throat quite a bit before Enjoy the Silence began.

7) Enjoy The Silence – One of my favorite songs from my childhood days – and a huge fan favorite. The energy of the crowd really helped pick up Dave’s momentum – and gave him the adrenaline to keep moving forward. I believe Dave was over compensating for his voice and asking for even more fan engagement then normal – which the crowd was into and helped carry Dave’s voice for the remainder of the song. It was clear that Martin’s backup vocals were stronger to help Dave as well. My friend Candy took notice of Andy Fletcher during this song and dubbed him the “keyboard cat” – as it was clear his keyboard was not plugged in and he was pounding and hitting the keys hard with zero rhythm – a great observation from a newbie at the show….I love Andy, but he needs to fake it to make it look better!

8) Never Let Me Down Again – This was another song where Dave’s voice continued to sound strained and cracking a bit. Again, the average fan wouldn’t have noticed – but I’ve attended more then 10 shows this tour – and his voice didn’t sound like smooth velvet. The backup vocals were strong to get Dave through the song, and Dave commanded the audience for participation – which everyone joined in with great excitement. After attending every tour since SOFAD it really amazes me to see this song live and watch the stadiums and arenas all follow Dave’s commands with the wave – its incredible to be a part of, and everyone goes WILD! 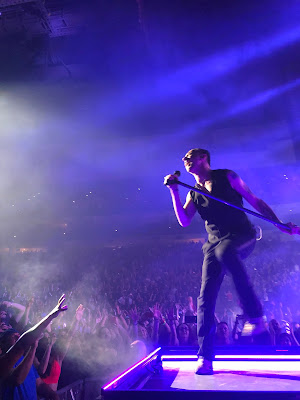 9) Walking In My Shoes – This is also another one of my favorite songs and it plays so well live – seeing the bond between Dave and Christian Eigner on drums is incredible, and never gets old. They are so in synch, and really play off each other’s energy! Something that you get to experience when you are within the first 10 rows is Dave propping his shoe up on a speaker in front of the center floor section and mouthing to the crowd (all while showing off his shoe) – “fuck yeah” while throwing the “rock out” hand gesture – it felt like Dave was speaking intimately to each and every one of us in the first 10 rows!

10) A Question of Time – Loved seeing Martin jump around a bit and really get into this song – Dave was loving the vibe between the band and the crowd – and after this song ended Dave shouted a big “fuck yeah!”- something I have not heard him do since the Devotional Tour – everyone around us was laughing and responded with a loud roar and applause!

11) Personal Jesus – a total crowd pleaser and captures the arenas attention every single time this is played. Crowd participation is at the all-time high for this show, and it’s clear that they do not want the band to stop playing! Again, I noticed Dave’s energy to slow down a bit, and he heavily leaned on the audience for participation to help his voice get him through the song – which was not difficult to do!

Overall, as always Depeche Mode put on a fantastic show! It was great to see them add Philadelphia as a tour stop, since it’s been quite a while since they have played for this city. Candy also loved every minute of the show – even when she was not familiar with a song, she said that Dave’s energy was contagious and pulled her in to join the fans raging and dancing around her. I hope Dave gets his rest – I can’t wait to see them in Brooklyn on June 6th and at their final show in Berlin on July 25th!!!