We are all Depeche Mode fans (if you're not, hello and I hope you are having fun) and our own reviews of Personal Jesus would be fairly similar I imagine. We all like it, love it even, and were we to write a review it would doubtless be very positive.

Positive is not a word regularly associated with the UK music press's approach to Depeche Mode however. What did they think of this new Depeche single back in 1989? As we saw in yesterday's Personal Jesus blog, the pre-release advertising campaign caught the eye. On 26 August, the NME ran a story about it:

The article mentions that the Aberdeen Evening News and Nottingham Evening Post refused to run the "Your Own Personal Jesus" advert on grounds that it may cause offence. Promotional job done.

In the next edition of the NME, Stuart Maconie and Martin Gilks from The Wonder Stuff reviewed the singles. You might remember The Wonder Stuff. They had a couple of passable albums but nothing phenomenal. Martin was no fan of Personal Jesus however. He said:

"It's great that they don't play all the Radio One rules, that they remain independent and make these weird records, but I can't say I like them. I don't care if I never hear that again. It's just so cold and lifeless. I respect them but it means nothing to me."

"A hit even as we speak, but in the frantic rush to lionise surly adolescents in black jeans and people with their caps on back to front, we seemed to have overlooked the latest release by the most subversive singles band of the decade. Depeche Mode make criminally brilliant pop records about God, death, crazy sex and alienation and as far as I'm concerned they can do no wrong. 'Personal Jesus' sounds like The Glitter Band in the throes of an intense personal crisis. Huge fun."

The September 20th edition of Smash Hits featured the lyrics of the song, but the magazine didn't seem to review the single at all: 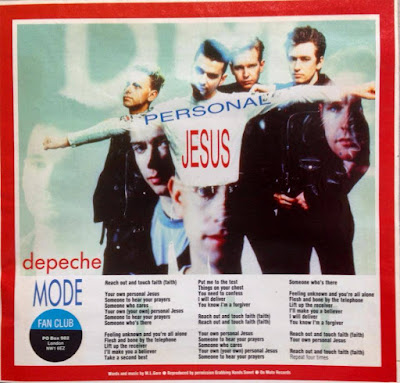 Record Mirror looked kindly on the song, with Iestyn George awarding it Single Of The Week on 2nd September 1989. He said "Basildon's finest plunder the past, dress it up in leather trousers and add a Duane Eddy guitar lick for good measure. I never thought the day would come when I would say something nice about Depeche Mode, so this is something of a personal landmark."

A Single Of The Week award certainly, but one that speaks volumes to the UK music press' attitude to Depeche at the time.  Other reviews were far worse however, such as this one from Melody Maker:

There is little point in dissecting that really. Sounds liked the single a lot more:

That review even seems to predict the Songs Of Faith And Devotion era, but that's for analysis in 2023.

Overall then, not uniformly positive and some signs that the British music press were starting to appreciate Depeche Mode a bit more, if not rapturously. The single entered the charts on 9th September 1989 at number 25 before climbing to its highpoint of 13 the next week. It stayed on the charts for 9 weeks in total, going from 13 to 14 and then 19, 30, 43, 65, 75 and then finally 86.  The performance was perhaps not helped by the band not appearing on Top Of The Pops in Britain. They appeared on a few shows in Europe including a show called Countdown (not that one.) As you can see, Alan was wearing a Dylan/Neil Young like harmonica thing for no good reason at all:

It seems slightly odd that a song that has such importance in the Depeche Mode catalogue came into the world with a whimper rather than a bang. The band ignored the reviews, returned to work and came back in early 1990 with an equally important track. It's fair to say that the reviews of Enjoy The Silence were rather different. More on that another day.