THE VIDEO WITH NO SINGLE NUMBER 1 - HALO 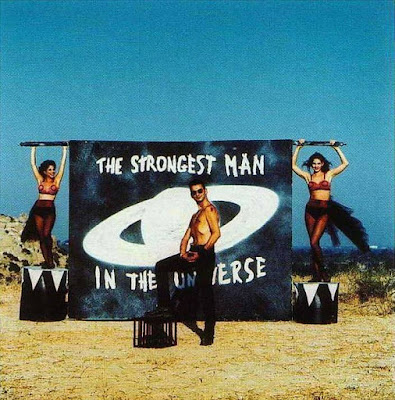 When you listen to an album and every track stands out as a potential single, you know that you are dealing with a classic. Violator is one such album and Halo is a song that could and arguably should have been a single from the album. According to Alan on his Violator piece on Shunt, the song was on the singles shortlist but it didn't make the cut. Instead, as with Clean, a video was made to use on Strange Too, the Violator era video compilation.

A promo cd was prepared by the band's US label, but no official release ever existed. 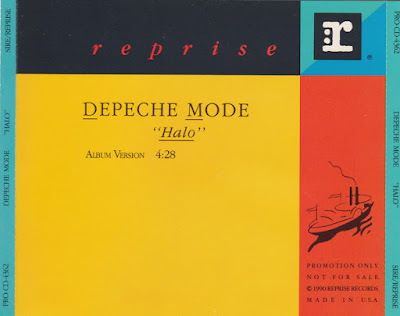 By the way, if someone tries to sell you a Mute promo 12" containing 5 mixes with the catalogue number DJ12MUTE747, don't buy it. It's a bootleg.

Halo is a sensational song, a glorious melody that builds to a mesmeric conclusion, all of which envelops some of Martin's greatest lyrics. Drum samples from When The Levee Breaks via a hip hop record that used the sample and strings constructed from a sample of an Elgar piece (as Alan told The Electricity Club in 2011) amplify a Flood and Alan arrangement that gives more than a nod towards the approach the two would take on Songs Of Faith And Devotion. Once Halo ends, you want to play it again. And again. And again.

The NME review of Violator by Paul Lester on 10 March 1990 named Halo as the album's standout song. The review said:

"Best of all is Halo, a dim-lit, menacing, slug-funk (Slug funk? I've no idea either) dirge that achieves the impossible of being both grimly oppressive and gloriously uplifting. It has been glued to my turntable for the last two months and it is the finest thing Depeche have ever done." 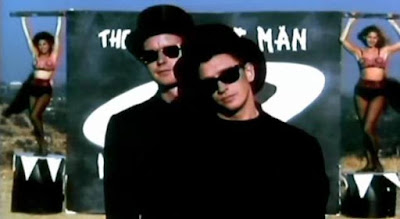 I can't disagree with any of that really. Martin's lyrics stand out for me here too, however. As Martin said in an NME interview on 7th February 1990:

"If you listen (to DM songs) there's always a sense of guilt. On Halo on our new album, you're right that I'm saying 'Let's give in to this' but there's also a real feeling of wrongfulness."

The lyrics certainly suggest a reluctance to do something ("You wear guilt/like shackles on your feet/like a halo in reverse") married to an ultimate decision to set that aside and just crack on with whatever was planned (Sex basically. It usually is with Martin. That or religion). The chorus, one of Depeche Mode's finest, sums that decision up beautifully:

In other words, we're all going to die anyway, so let's stop worrying and have a bloody nice time instead. Though Martin put it somewhat more eloquently. 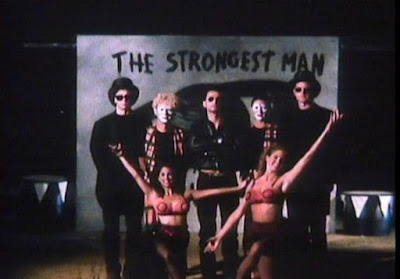 The video for the song was filmed on 2nd August 1990 at Griffith Park, Los Angeles, two days before the first of the Dodgers Stadium gigs. Alongside the band, Anton and his donkey are two actresses called Pam Heffler and Jenna Elfman who take on the roles of dancers in the travelling Mode circus. Alan and Andy are naturally dressed in black, carrying signs and looking like electro-undertakers. Dave, a brooding caravan based presence, initially chats up Martin's fellow clown. He is apparently The Strongest Man In The Universe, but as you can see below, he certainly doesn't look like it. Martin takes on the role of badly juggling clown, and despite his average attempts, he charms his fellow clown, leading her to reject Dave "Strongman" Gahan and join Martin in his bed under the caravan.

I love the video but then I would, wouldn't I?

As part of our research for Halo - The Story Behind Depeche Mode's Classic Album Violator, I spoke to Pam Heffler about the video. She remembers filming for one day and one evening and she was delighted with the end result, calling the video "eclectic, creative and unusual in a great way."

Halo is a track that has certainly stood the test of time and remains something of a favourite of the band's if the amount of times it has been played is anything to go by. DM Live Wiki notes that the song has, thus far, been played live 431 times. The band have usually favoured a fairly standard version of the track when playing it live but on the Delta Machine tour, they, quite marvellously, used the 2004 Goldfrapp remix of the song for the live shows in the encore. On the Global Spirit Tour, the song somewhat randomly popped up at one gig only in Dublin on 15 November 2017:


Luckily for me, I was there. It was strange to see a song like Halo suddenly appear as the band are not known for playing songs at random on tour. Like me, everyone else in the crowd was caught by surprise thinking "Hang on...Halo?" before going completely bonkers as you would expect.

The reaction of the fans there that night, of fans keeping an eye on the setlist suddenly exploding with surprise and jealousy, and of fans disappointed on every other night of the tour when Halo didn't appear sums the appeal of this song perfectly. It's a much loved gem, a single that could have been, and an absolutely classic, peak era Depeche Mode track that sums up everything good about this band.