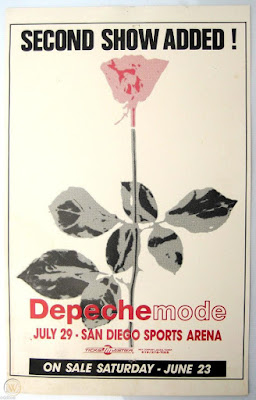 When I wrote about the World Violation tour yesterday, I deliberately avoided talking about recordings from that tour. As we all know only too well, the band have never released anything officially from the tour - no live tracks on singles, no footage of full songs online and no live video (as it would have been) or DVD ( as it would be now). It's a constant source of frustration to many myself included, as that tour's setlist and accompanying visuals are remarkable and would have made a wonderful live release. As Alan told Shunt however, it was felt that any release would have been far too close to the release of 101, so it was felt that a World Violation live video was not worth doing.

Bearing in mind the recent release of the bewilderingly priced and indeed bewildering generally Mode boxset, it's safe to say that attitudes have somewhat changed about Depeche releases.

The only sniff of anything official appeared on the band's official site a few years ago. Daniel Barassi, the band's Archivist explained how this came about on the site:


Fans have wanted a good recording of this tour for over a decade, but that has been virtually impossible to come by. While audience recording bootlegs (of fluctuating quality) have surfaced of this tour, there has never been anything of true quality that has been available to the fans.

While on a week break in England (in 2002), I (the webmaster) raided the band's office in London. Among the treasures discovered was a videotape with a very simple, hand-written label ("Dodgers 080490"). Dust covered, and sitting in the office since the end of the tour, this tape would have surely been lost and/or forgotten, if I had not "borrowed" it from the offices.

The video featured here was recorded "live to tape". All effects, camera changes, and recorded audio was recorded in a raw, "one take" mix. As such, some camera angles, and audio flaws, might pop up from time to time. For such a historic document, we don't think the occasional flaw (or "video toaster" effect) will distract from the performances.

Voted by you, the fans, as the most desired live concert in the Archives Concert Series, here are excerpts from the World Violation Tour, exclusively on depeche mode dot com.

As I mentioned yesterday, it is well worth watching this only if to give yourself a tantalising glimpse of what could have been. It always strikes me that there are just a few too many effects etc for this not to have been filmed with a view to using it. We may never know though. All we can do is watch clips of the songs, like this one of Waiting For The Night and hope something full sees the light of day one day.


If we want to see or hear anything from the World Violation tour then, we must track it down ourselves. Happily, Matthew Wolfe who runs the legendary DM Live Wiki is on hand to help out with that very task. Matthew provides a service to Depeche fans that is impossible to praise too highly. As well as recordings, there is a treasure trove of information on his site and, if you haven't visited it already, put this down and go there now. You will get lost in the sheer amount of content and will have the time of your life. Once you're done, remember to come back here and finish this article off.

As I did on the Black Celebration special, I asked Matthew if he would be up for chatting about the World Violation recordings and happily he agreed. Here Matthew walks you through the best recordings of the tour and much more:

APA: How many World Violation tour gigs do you have on the Wiki?

APA: Soundboards aside, which we'll come onto, how is the general quality of recordings from the tour?

MW: There are a handful of true gems, such as 1990-08-05 Los Angeles, the popular 1990-11-11 Milan, and 1990-11-20 London, but the rest rarely get any better than a "good" in my humble opinion. Put it this way, generally I won't go and listen to any random audience recording from this tour out of spontaneous desire. For some reason, the quality of audience recordings just wasn't there on this tour. It probably doesn't help that the crowds were generally absolutely wild and noisy, as heard on most of the recordings.

APA: Is there much decent video about and, if so, are there any you'd recommend?

3. I'm afraid I'm not much of a video collector at the moment. There's good audience videos of 1990-11-11 Milan, 1990-10-05 Gothenburg, and 1990-10-08 Frankfurt (below), but as I haven't ventured significantly into archiving the video "bootlegs", the most I've got on the wiki for these at the moment is a YouTube embed. Eventually, the wiki will expand to include video proper.

APA: Turning to the soundboards, what do you know about these? How did they come about?

MW: Here's the can of worms:

1. July 21, 1990, Shoreline Amphitheatre, San Francisco, California. The soundboard version that floats around (and is available on the wiki, naturally) sounds good and fine - if you can tolerate the heavy rounds of repeated MP3 compression that it's underwent, which tends to give it a jarring, harsh sound. It's usually listenable, but stuff like the swishy-sounding artifacts during Everything Counts really turn this one off for me - maybe I'm just particularly sensitive. I think this one's from a pro-shot video, but I haven't come across any concrete proof so far.

2. August 4, 1990, Dodgers Stadium, Los Angeles, California. This originates from the pro-shot VHS tape copy that BRAT shared snippets of on the official website, which was then pressed to 3 multicolored vinyl and bootlegged a few years ago - jeez, probably close to 10 years at this point? Someone wasn't supposed to share this, but it happened. It's unfortunately incomplete, with the final 5 tracks originating from the 1990-07-21 San Francisco soundboard mentioned above, for some odd reason. This recording doesn't sound quite as clear and good as San Fran, but it is after all an unmixed soundboard feed which has had its quality further reduced by having been pressed to vinyl, and generally worse quality multicolored vinyl at that. I've tried to track down who is responsible for pressing the vinyl, maybe to get the source audio, but that's been fruitless so far.

The nice part about these two recordings is that the four usual Martin acoustic tracks (Here Is The House / Sweetest Perfection, generally played during the second night at a given venue, and I Want You Now / World Full Of Nothing, which was more commonly performed at most concerts) are represented in soundboard quality. That leaves Little 15 / Blue Dress as the odd ones out, but thankfully there's a good audience recording of these both from the third nights in San Diego and Paris, respectively.

APA: There is also the issue of the leaked backing tapes too. What can you tell us about them?

MW: These have been circulating on very mediocre quality cassette copies since the early 1990s. While the backing tape audio does corroborate that about 50% of live Mode is performed live, as Alan said on Shunt, what you hear is not necessarily all that was output to the PA during the live show; some sounds are "backup" on tape in case of some failure, and would be muted in most cases. I've read that hearing these backing tracks caused some fans to become so disillusioned with live Mode that they stopped collecting, but I'm not sure how true that is. They're a fascinating listen once or twice, or maybe as some background music while studying or working, but even the great sounding cassette copy I was able to attain and preserve is rather on the hissy side, in particular the second half as a slightly worse quality cassette was used to make that copy. I've made 2-minute warning snippets of each track available on the wiki. As they're not really a rarity and with any real trading value any more, I've certainly considered making the complete set available, but as they're derived from studio content, they're in even more of a gray area compared to the rest of the wiki, so I err on the side of caution here.

Thanks very much indeed Matthew. 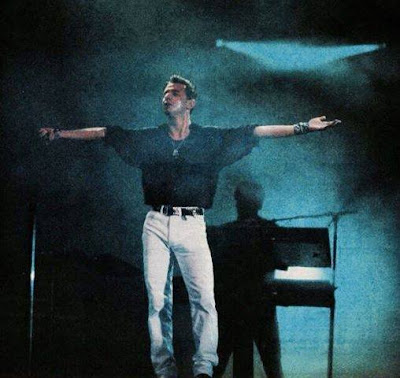 The World Violation tour is destined to be remembered both as the tour that fascinates Depeche Mode fans above all other tours. The combination of the band being as big as they ever had been and the lack of official coverage makes it a tantalising, almost frustrating tour in many ways. Everything you can see and hear about it proves that it was a monumental event from beginning to end - all we need is official evidence from the band to let us make our minds up once and for all.
Posted by DJM at 08:35