Having decided they needed time off, Depeche Mode chose not to release an album in 1985. Instead, they decided to bookmark the end of a hugely successful first five years with a singles compilation more of which in a bit. The band did release a new single, however, in the shape of the, at that point, stand alone single Shake The Disease which was released on 29 April 1985. Somehow or other the song only reached number 18 in the UK charts.

Two of the top 10 biggest sellers in the UK that year were I Know Him So Well by Barbara Dickson and Elaine Paige and Frankie by Sister Sledge. Honestly, there should be some sort of trial where music buyers of 1985 are asked to justify why Shake The Disease was something they chose to ignore. There should be recriminations. Number 18 - madness.


Ranting aside (number 18? Really?) let's try and be objective about the song. Shake The Disease is a bloody brilliant song (bye objectivity...), lyrically, musically, and yes I'll say it even ..er...pictorially as the video itself was.....(drum roll)....NOT TOO BAD BY DEPECHE MODE STANDARDS! Ok, Martin looks really quite strange, Alan's hair is either half mad or brilliant depending on your views, Dave and Fletch are both blonde and someone tries to play a metal fence at one point but I don't care. It has everything that period Depeche should have. Brilliant metallic music, do 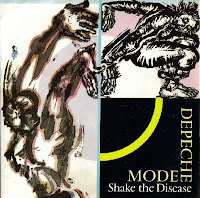 cks, metal, black leather and more metal. The song itself remains one of my favourite Depeche songs and at the time of its release was surely Martin's finest effort. It was played live up until the World Violation era (the version from that tour is well worth checking out) and then was resurrected by Martin on the last two tours as a hugely fantastic part of his solo set. The single came out on the two standard formats of the era - 7 inch (7BONG8 - left) and 12" (12BONG8 - right). The 7" was backed with a brand new b-side called Flexible which isn't great but does the job jus 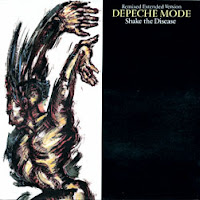 t fine. I often ask myself if it is indeed a sin to be flexible when the boat comes in purely as a result of having heard that song. I am yet to find the answer. The 12 " contained a princely two tracks - Shake The Disease (Remixed Extended Version) and Flexible (Remixed Extended version) both of which chose to lengthen and sonically re-arrange the 7 inch versions i.e they remixed and extended them. The remix of Shake The Disease is great and still one I play. The Flexible one isn't that good but again is ok. The Limited Edition 12" (L12BONG8) is a different beast entirely. It houses a whopping 4 tracks, is beautifully packaged (below) and really is a rather fantastic thing. Because I was a Violator era convert I had to play catch up with Depeche Mode and for some years this 12" was something of a holy grail for me. I eventually found it in the second hand section 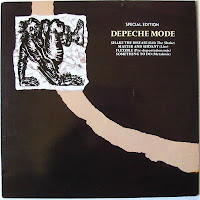 of One Up in Diamond Street, Aberdeen for £2.29. I was 20 at the time but when I found it, paid for it (Me - "I cant believe you're only charging £2.29 for this" Beyond Indifferent Assistant "Its only Depeche Mode mate") and left the shop I actually ran back to my flat to play it. I still would too. Anyway, the tracks - Shake The Disease (Edit The Shake), Master and Servant (Live), Flexible (Pre-Deportation Mix) and Something To Do (Metal Mix). The Shake The Disease mix is good, the live version of Master and Servant great to hear and the Flexible mix passable but the star here is the remix of Something To Do. It's abolutely fantastic albeit dont listen to it on headphones at a loud setting initially as the first 15 seconds will cause you some form of hearing loss. This remains one of the great Depeche Mode vinyl releases and I demand you all get it if you can. The German releases didn't let the side down either with a red 7" and a lovely black and white splatter vinyl of the standard 12 " and the same splatter vinyl for the L12". As with the UK release the star of the show is the release of the limited edition which in Germany came on cd. And it only got to number 18! My vinyl collection is pictured below 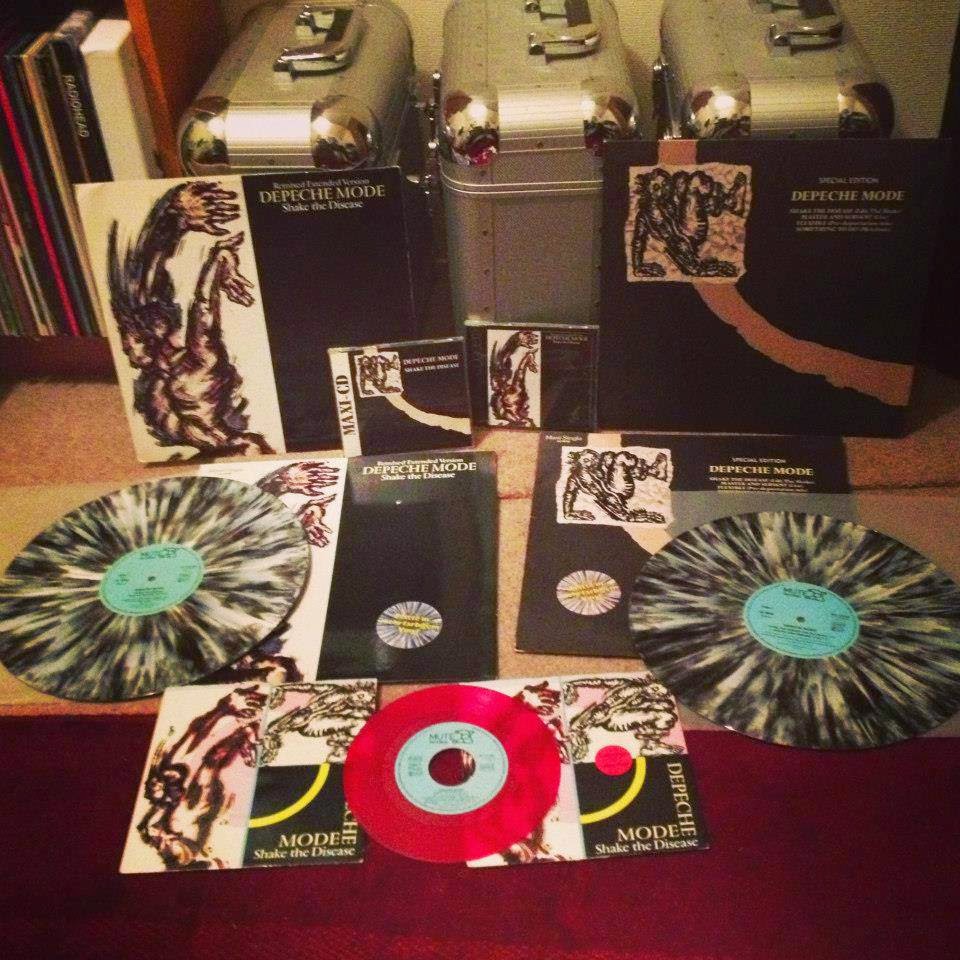 To show the UK record buying public that they were cloth eared buffoons the band decided to release another new song on 16 September 1985 to promote the forthcoming singles compilation. This song was going to be a huge smash that would entrance everyone who heard it giving the band their long overdue first number one. Due to an error at the pressing plant however, It's Called A Heart was released instead.

Or at least that's what I presume happened. Compared to Shake The Disease, It's Called A Heart is a baffling choice of single. The lyrics are shocking albeit medically accurate (a heart is inside the body and does indeed beat), the music's all clunky and a tad novelty and the 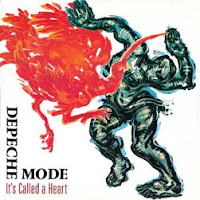 video is nothing more than a horrorshow with voodoo people, an oddly tanned Dave and lots of running about in fields. I just dont get it. The song is even more baffling when one considers its b-side (7BONG9 - right) Fly On The Windscreen. This must rank as the band's best ever b-side and is a song so good that it popped up on Black Celebration, will feature on the new remix album and was played live in 1986 (AMAZING version - you have to find it), 1993 (the slower version which is still good) and 2009 (great apart from (1) the trum 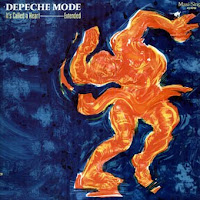 pet sound which is a bit Bontempi and (2) the fact they dropped it from the set before I saw the tour). It's 1000000 times the song It's Called a Heart is. My version of the 7" comes with a poster - I dont know if all versions did and would be delighted of someone could let me know. (EDIT - not all versions came with a poster) The 12" version (12BONG9 - left) added an extended version of both tracks both of which are absolutely fine and it could be said that the extended version of the lead track improves it somewhat. I should say that for all my badmouthing it, the live version of It's Called a Heart from the Black Celebration tour is pretty goo 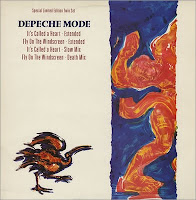 d too. Instead of an L12 this time the band upped the stakes somewhat and issued a D12 - not an early version of Eminem's chums but a double pack 12" featuring two 12" singles. As the label on the record said it was a Special Limted Edition Twin Set and it was to retail for no more than £2.99. Tell that to ebay. This bumper pack of fun (D12BONG9 - right) featured four tracks - the two Extended versions from the normal 12", the fantastic Death Mix of Fly On The Windscreen (set to feature on the new remix album) and the horror show war crime of It's Called A Heart (Slow Mix). It was a slower version of the title track akin to when you play a 45 rpm record at 33rpm but nowhere near that good. Honestly lads (if you're reading this (which I doubt) (but if you are I hope you like it)) what were you thinking. Alan is on record as saying he cant stand this version and I agree entirely. The German editions here are the red 7", a lovely blue vinyl 12" and a cd version of the double pack albeit with only one cd.

A final point to note about It's Called A Heart is that it reached number 18 in the UK charts. The same as Shake The Disease. I give up. 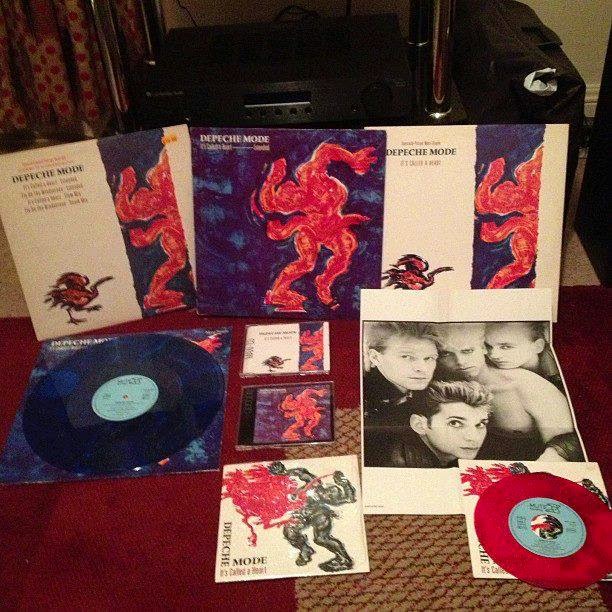 As I mentioned above the band chose to release a Singles compilation in 1985 mysteriously called The Singles 81-85. This smashed its way onto record and cassette players and into the charts on 15 October 1985 (MUTEL1 and CMUTEL1) reaching number 6. It takes all the singles from Dreaming Of Me, slaps them in chronological order and lays the first fe 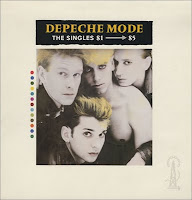 w years of Depeche on a plate for your listening pleasure. The sleeve is an absolute disaster, as we can see to the right. There are many things I love about Depeche Mode but I really must question their decision making in the early years. Did they actually see this cover before agreeing to it? The inner notes of the album are a nice touch as they take a bad review and a good review of each song which makes for a fairly amusing read. There are also a load of photos on the gatefold sleeve of the vinyl which I guess must be from the band's personal collections. It re 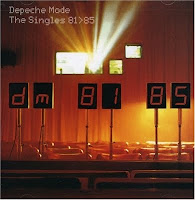 ally is a top notch compilation which shows the progesstion the band made in only 5 years. The vinyl excludes The Meaning of Love (hoorah!) and Somebody (boo!). There is also a German grey vinyl version. The cd version came out later in the 80's and then the whole thing was reissued and repackaged to misquote Morrissey on 26 October 1998 (left) to tie in with the later singles package. The tracklisting was the same with the addition of Just Cant Get Enough (Schizo Mix) and Photographic (Some Bizarre Version). Get it for the latter track alone. This was a song that featured on the legendary Some Bizarre album and until this release was only available there. The reissued album was available on LP, cassette, CD and MiniDisc.

The Singles 81-85 represented the end of Chapter 1 of Depeche Mode. Filled with highs (Shake The Disease, Construction Time Again, Some Great Reward) and lows (The Meaning Of Love, It's Called A Heart) the band's first five years had seen them gradually grow in popularity globally whilst perplexingly losing support at home. The next few years saw them explode worldwide, the key to which was the classic Black Celebration album which we'll look at in a few days.
Posted by DJM at 14:07