A QUESTION OF LUST

The second single from Black Celebration was a first for Depeche Mode in that it was the first stand alone single to feature Martin on lead vocals. Somebody was part of a double A side with the apparently controversial Blasphemous Rumours in 1984, so, as far as I'm concerned that makes a difference. Given the proportion of Martin sung tracks on Black Celebration, it was perhaps no surprise one was picked as a single and, of his tracks, A Question Of Lust is really the only obvious choice as a single. It's an enduring track and one that it's still cool to hear Martin perform.

Did the British record buying public like it at the time though? No. No, they didn't. It popped out on April 14 1986 and promptly stalled at number 28, the band's lowest placing since Dreaming Of Me.

The single had some good press - Smash Hits said:


With a "provocative" word in the title and a couple snogging on the cover, one would expect this record to be at least slightly "steamesque" and pervy. But no. They don't take any of their clothes off at all! Once the black electro clanks of the intro have settled down, we are presented with a floating, melancholic tune and a wheezing, breathy voice that's singing about "love" not "lust" (a word employed solely to rhyme with "trust" and "dust"). Moody and pretty but entirely saucefree. What a swindle!

and No.1 magazine liked it too

Depeche Mode
A Question Of Lust (Mute)
On first hearing, this sounds like it should never have been released as a single, but a few plays later and the first fully fledged DM ballad really begins to have an effect. It's a s-l-o-w, hauting track, mournful without being depressing and more proof of their increasing maturity. A nice twist to all the usual love songs, too.
4 stars

Melody Maker got it all so very wrong though, even down to the identity of the singer


A QUESTION OF LUST - released April 14, 1986
Like unwilling bedfellows thrown together by sheer happenstance, Depeche Mode and yours truly meet for the third time on the singles page. Each successive release convinces me afresh that the only factor impeding this groups' ascent to ultrastardom is the unrelenting glumness of singer Dave Gahan. A less oafish reviewer would recognise his juiceless tones for the affirmation of his sensitivity they obviously are; I hear a pretty good song, which incorporates the swelling grandiosity of Godley and Creme's "Cry", rendered stultifying by Gahan's pallid murmer

but none of that made any difference as the single didn't perform at all. Perhaps if the band had tried the birthday cake idea in the U.K. that they tried in Japan in August 1986, it might have made a difference:


Anyway, what of A Question Of Lust and its formats? Well, the single appeared in a number of guises in the U.K. including the band's first ever cassette single (CBONG11), which was quite a fancy package. As you can see from the promotional poster below, it came with a booklet, a badge and, of course, a cassette which featured five tracks - A Question Of Lust (Flood Remix), Christmas Island and versions of Shame, If You Want and Blasphemous Rumours, all recorded live in Basle on the Some Great Reward tour.

The artwork for this package is quite cool. The arrow pointing to the explosion as referred to in my earlier post on the album cover icons is there and that appears again on the booklet. The thing is, that icon on the album is linked to A Question Of Time. Stripped's icon on the single is the same as the one on the album, so this arrow explosion business here only serves to confuse. The DM logo that appears with A Question Of Lust  is nowhere to be seen here either. All that said though, there is a very real chance that I am the only person on earth who cares about this.

The booklet itself contains four fairly dreadful pictures of the band, lyrics for the 5 songs on the tape and a small picture of the single's cover sleeve. Curiously, the front of the package has a checklist on it where you'd certainly hope to see ticks beside the three selections - cassette, booklet and badge. The words "Limited Edition" also have an exclamation mark after them for some reason. Excitement maybe?  Full pictures to follow in a later rarities blog. The other thing to note is the "dM" sticker on the back which holds everything in place. I have an open version and a sealed version because that's the sort of person I am. The sealed one looks like this: 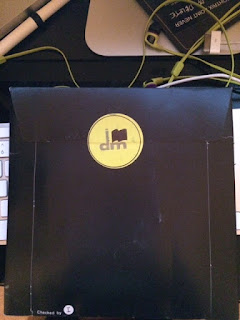 Anyway, it's all about the music really isn't it? The Flood remix of A Question Of Lust is decent enough though slightly sparse, missing some sounds. That wasn't a trick of Flood's own doing however. It transpires that Mute only sent him both multitrack tapes which wasn't terribly clever. It's a nice mix though. Christmas Island is a doom laden, nuclear themed instrumental written by Martin and Alan which the band produced all on their own. The live tracks are all excellent, crisp recordings and are all worth hearing. As for the other formats, the standard 7" single comes the with album version of A Question Of Lust albeit without the Fly On The Windscreen fade out/in and Christmas Island.  The front cover is not Alan kissing someone, but instead it is two friends of the photographer. The rear of the sleeve shows the band standing on the stairs in Hansa.

The only other U.K. release was the 12", like Stripped, 5 tracks full but they didn't shout about that this time. There were no claims about the length of the record either.  On it you have A Question Of Lust, an extended Christmas Island that doesn't really add a great deal to the 7", a live version of People Are People, again from Basle, an instrumental of It Doesn't Matter Two, which really is quite lovely and finally, A Question Of Lust (Minimal). The last track is the star of the show - an eerie, minimal take on the track, prepared by the band, Gareth Jones and Daniel Miller. Time for a gratuitous record collection shot:

You'll note a few things there that I haven't mentioned. Firstly, the two cd singles on the right are the 1991 U.K. reissue and the 1986 West German Intercord cd single which, like all those lovely Intercord issues, has that blue strip in the middle. That single features same tracks as the U.K. 12". The West Germans, as we'll hear later on in a rarities piece, loved their coloured vinyl in the 80's and the standard U.K. 12" is reproduced above in wonderful marbled vinyl. The 7" also got a red vinyl edition. Finally, the yellow record above is the West German 12" version of the U.K cassette single albeit you don't get a badge with that. Still get the booklet though. The French also released a cd single at the time, featuring the tracks on the cassette single. It's ridiculously difficult to get and, sadly, doesn't feature in my picture above.

Finally, somewhat inevitably, we come to the video. As with around 95% of all Depeche videos pre Anton, it's not that great. Clive Richardson was in the director's chair, and he took the bold move of starting the video off with footage of Martin jumping around naked and somewhat refreshed in a dressing room. It then, mercifully, moves to shots of the band being all moody on a hillside, hitting bits of metal, with Dave doing his best to stay involved playing a tambourine now and then. Not great, not the worst thing they'd done at that point either. Have a look:

The single was also released in America, albeit in a curious double A side thing with A Question Of Time so I'll visit that later on. What is nice though is the U.S 12" promo which comes in a cool cover and features a Remix Edit by Robert Margouleff of But Not Tonight "fame."

So that's the story of A Question Of Lust. As I said at the start, it's a track that's certainly endured and the 101 version is particularly wonderful, especially where Martin goes up a notch on the last "And you know that I'd rather be home."  In an album full of great songs, like the record company said, there weren't too many singles, so maybe A Question Of Lust was one of very few options they felt they had. I'm glad they released it though - if only for the Limited Edition! cassette single if nothing else.