Stripped is arguably one of the most important singles Depeche Mode have ever released. Shake The Disease had provided an indicator of the band leaving behind the poppier elements of their sound, but Stripped was the first real sign that Depeche were headed in a darker, more interesting direction. Yes, tracks like Blasphemous Rumours are dark in a way, but it still has one of the band's poppiest choruses and while Master & Servant spoke of kinky fun in a subversive way, you wouldn't say it was a grand statement of gothic majesty. Stripped is where the darker side of Depeche Mode came to the fore and, let's face it, we are all delighted that it did.

Stripped was released on 10 February 1986 and reached an implausibly low number 15 in the UK. The single was promoted well at the time too, albeit appearances on U.K. television chat show Wogan (see below) and other shows contained the odd sight of a motorbike on stage with the band. Whilst the sight of Alan and Fletch bashing away on drums was perhaps designed to show that Depeche were a "real" band rather than just synth boffins, the motorbike, present of course at the start of the song in sampled form, was stretching things a tad far. Anyway, all that aside, Stripped  was well received by the press at the time but still failed to get a chart placing it deserved.

Smash Hits, the UK pop magazine loved it too


SINGLES REVIEW
Reviewed by Simon Braithwaite
Depeche Mode were becoming very predictable but this is the best thing they've done in ages. "Let me see you stripped," sings Dave Gahan and bang goes their appearance on Saturday Superstore. Actually, I think it's all about going back to nature and "discovering yourself". Slow and atmospheric, even though you can't work out what he's going on about.

The best thing they've done in ages indeed. Finally, the No. 1 magazine review was even more positive:

Depeche Mode must rate as one of the most consistent if not one of the best pop bands of the 80s. They have a distinctive sound, but not so much so that each release sounds like the last one. Their lyrics actually mean something without being pretentious and over the top. Yet they never seem to get the adulation that their competitors get. Strange that.

Let’s hope that the haunting stillness of ‘Stripped’ puts them up where they belong, before Frankie and Spandau reappear.
Mark Booker


One thing I love about Stripped, and this is where the geek in me comes to the fore is the fact the 12" was loudly proclaimed to be a "5 track, 25 minute" record (see poster below and the 12" cover itself) and we were told that no further releases beyond the 7" and 12" would be made available. Fair enough. As we'll discover in a bit more depth tomorrow, But Not Tonight appeared on the b-side of the 7" and the 5 tracks that made up the 12" were: Stripped (Highland Mix), But Not Tonight (Extended Remix), Breathing In Fumes, Fly On The Windscreen (Quiet Mix) and Black Day. Together they all last 25 minutes 3 seconds, so you got 3 seconds more than the advertised time. Don't say Depeche Mode aren't good to you.

The 7 tracks this release features became available on cd in the UK in 1991 during the first phase of the Depeche Mode Singles re-issues. As with all the band's releases up to 1988 however, the band's West German label, Intercord, were ahead of the game with a cd single issued in 1986. A French cd single is available too. As well as digital formats,  Intercord released not one but two coloured vinyl 12" versions of Stripped, as well as a red vinyl 7". There's a blue and white marbled vinyl and a white one, both of which are beautiful. They both have the same running order as the U.K. 12" and there's not much else to say about them, other than to say the blue and white marbled vinyl 12" is much easier to find than the white vinyl 12". It took me ages to track it down but I have it and it forms part of my Stripped collection which you can see below. 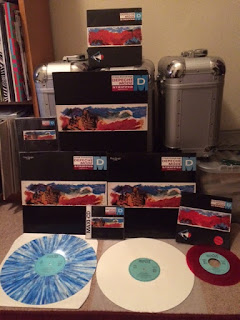 As well as a piece on But Not Tonight, there will be something about Fly On The Windscreen here later this month, so we'll leave any analysis of those tracks for now. The Highland Mix of Stripped is one of those classic mid 80's 12" remixes that compliments the original track perfectly. Up until this point, the band, along with Daniel Miller and later Gareth Jones, had in the main prepared the 12" remixes themselves with some success on the likes of People Are People (Different Mix) for example. Limited edition 12" singles for People Are People and Master & Servant had seen Adrian Sherwood's On-U Sound take over remixing duties of course, but beyond that, 12" singles were dealt with by Depeche and their studio team. Here though, a keen young chap called Flood was passed the remixing baton and he produced something very special. The song gets more space to breathe which gives it a wonderful moody edge and the individual sounds are easier to pick out than in the 7" version. The main riff is given a distinct bagpipe feel too, hence the title. It's a vital mix for anyone exploring Depeche Mode's back catalogue.

Stripped aside, one important aspect of this release was Breathing In Fumes. Using Stripped as its starting point, the track is a powerful, bombastic, six minute wall of wonderful noise. As we'll read later this month, this was the band, Daniel and Gareth Jones' own take on a 12" mix of Stripped and it really is an outstanding track, with the vocals shared between Dave's sampled lead from Stripped and Martin's heavily processed vocoder parts. The latter can be seen on the Black Celebration reissue dvd. There's a distinct sense of the On-U Sound mixes I mentioned earlier here too. The 12" ends with the first and only Gore/Wilder/Miller co-write Black Day. Even though it's something of a throwaway track perhaps designed to push the record over the 25 minute mark, there's something endearing about it. After the hard slog of the Black Celebration sessions, it shows the band taking it easy and even having fun. The nod it gives to the at that point unreleased title track of the forthcoming album is a nice touch too.


Finally, the video for Stripped (above) deserves a mention too. Filmed just outside Hansa in Berlin and directed by Peter Care, it's a rather neat summary of where Depeche Mode were at this point in their career. It's dark, it's in Berlin, there's more leather than is necessary and they're all hitting things with hammers. What really makes it all work though is the intensity, power and sheer wonder of the song however. Stripped set Depeche Mode off on the path that ultimately led them to become the biggest band in the world for a while and that sees them still full stadia around the world today. Dark, mysterious, uniquely experimental in the pop field and ultimately a fantastic single - Stripped is where Depeche Mode became vital.