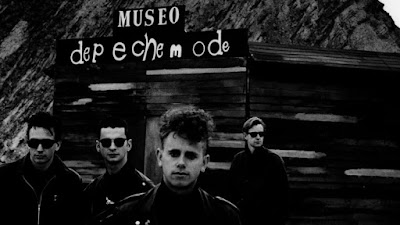 This week's entry into the Depeche Mode Museo is the first of a three part Personal Jesus special and we begin with the rather lovely limited edition 7" gatefold version which was a U.K. release. As ever, all pictures are of my version and all factual errors sadly mine too.

This release of Personal Jesus is unique among Depeche Mode releases in that it is the only 7" gatefold release in the band's U.K. catalogue. The addition of the letter G for gatefold to the catalogue number is a typically delicious touch and one you can't but help but love. The artwork on the front is the same as the artwork for L12BONG17 and LCDBONG17 and the rear picture is the same as you find on those releases too, with Martin hugging the naked lady whilst his bandmates stand around. Dave seems particularly perturbed by the whole thing.

The rest of the package is simple but very cool. The gatefold sleeve comes with a large D on the left inside flap and an equally large M on the right inside flap. They are of course the letters forming the iconic DM of the time which was later, most wonderfully seen on XL12BONG19 and XLCDBONG19, the Quad:Final Mix of Enjoy The Silence. The gatefold sleeve itself is a heavy gatefold made of much thicker material than a standard 7" as it houses a four page booklet that is stapled into the gatefold sleeve.


The booklet contains four pictures, two of which can be seen above, Page 1 is Dave with the mysterious woman as seen on the rear of 12BONG17. I also have that as a poster that I bought in my first week at University in 1992. It's still in decent condition too. The fourth page of the booklet shows Martin, as you've no doubt already worked out. It's the same picture you'll find on the standard 7", BONG17. 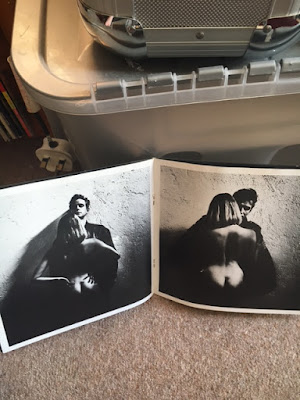 Andy and Alan aren't overlooked though. They appear in the middle two pages of the booklet. Andy goes first, in the same pose as on the cassette single CBONG17. It looks a bit like he's being lectured by the woman which is a bit unfair as everyone else seems to be getting on just fine with her. Finally, Alan makes an appearance, striking the same pose as you'll see on CDBONG17. I remember being told by what was clearly someone making things up and trying to confuse an impressionable then young Depeche fan that Martin was in fact the woman we see in the pictures, dressed up in a wig and nothing else. The fact that there's a picture of Martin apparently hugging himself and managing to appear to be slightly taller in one of his guises pretty much destroys that theory. Like it was ever anything other than rubbish in the first instance.

Enough art, what about the music? Well, until the boxset reissues in 2004, this was the only place you could find the Hazchemix Edit of Dangerous. The edit is, of course, an edited version of Dangerous (Hazchemix) which appears on L12BONG17 and LCDBONG17. It's a cool edit of a good remix of the track and certainly worth a listen. The A-side features the standard 7" version of Personal Jesus and the b-side gives us the aforementioned Dangerous (Hazchemix Edit) and Personal Jesus (Acoustic) which also appears on 12BONG17 and CDBONG17.

As you can see on the photos of my version, the label features the catalogue number GBONG17 on both sides, For some reason, other variations show BONG17, which isn't correct and others have BONG17 on side A and GBONG17 on Side B which is just strange. This sort of fact may not be important to most of you, but it is of great import to many collectors. Why have one variation when you can have three?

This is a great release to have for many reasons. It's Personal Jesus primarily, one of the greatest songs of any era. Also, it's from the Violator period and ALL releases from that time are worth having due to the sheer majesty of both the art and the music. Finally, it's a unique Depeche release and that makes it a must have. It was released in limited quantities but, as I type, you can pick it up on Discogs for around £15. (https://www.discogs.com/sell/release/191106?ev=rb) I also know for a fact that it's available for $8.99 at Freakbeat Records in Sherman Oaks, CA as Depeche Mode webmaster and general all round top Depeche bloke Daniel Barassi tweeted a picture of it three days ago. If you're near there at all, go and snap it up.

Coming next in this Personal Jesus special, we've got entries from Australia and South Africa. See you soon...