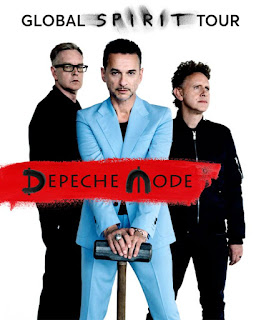 Depeche Mode are currently holding their press conference in Milan at which they have announced that they no longer have an official hairdresser. The announcement has shocked the DM fan world, but the blow of it has been softened somewhat by some other news.

At the conference, Dave spoke briefly, more of which in a bit, but once he'd finished, Fletch asked if he'd forgotten anything. Martin said

"Is this about the hairdresser?"

"That's right. We don't have an official hairdresser for the tour."

So there you go.

Depeche Mode have confirmed today that they will release a new album called Spirit in Spring 2017. The album will be followed by the Global Spirit Tour which starts in May, taking in 32 gigs in 21 European countries on its first leg, with most gigs being outdoor. Venues include Stockholm (tour opener), Antwerp, Amsterdam, Copenhagen, most of Germany and many more. Dave also confirmed that later legs would be announced including North AND South America.

Among the dates, there is the band's first U.K. stadium show since 1993's legendary Crystal Palace gig, with a show at the London Stadium on June 3 2017. Tickets for the first leg go on sale in the next few days.

The band played a short film to introduce the press conference which featured snippets of three tracks. The first felt very electronic and seemed to feature many of Martin's modular synths. The next was dark and atmospheric, featuring Portishead like guitar and lots of moaning and "woo-ooh"ing. The third and final track was the only one to feature vocals. Moody, electronic music played while the words

"Where's the revolution? Come on people, you're letting me down."

repeated twice. I don't want to get carried away, but all three sounded superb. Imagine me saying that eh?

Dave confirmed that the album has been produced by James Ford and that it's an incredible record that they're all proud of. Martin and Fletch echoed that by saying "We are" at exactly the same time. The album features two songs by Dave - don't know if there's a co-wrtiter or not as yet.

The band were asked about what they intend to play on tour - Martin said "I'm sure we'll upset a lot of you." They clearly read the online forums.

The conference has now entered the fan questions stage. As ever, these are mainly odd questions, but from them we do know that the band are working with Anton for the projections and photos, plus they'll be working on a video with him. Seems he'll be heavily involved as ever.

You'll read lots about this in many other places from now on, so that'll do me in terms of a live(ish) report. If you are a hairdresser in need of work, send the band a c.v.

Here are the full tour dates:

Following the European tour dates in Summer 2017, the Global Spirit Tour will continue with shows in North and South America.