Here we go again. As you probably all know by now, the third leg kicked off in Dublin last night and it was a spectacular start to the next few months' gigs. Michael Lyons returns to reviewing duties for this one and this great review perfectly captures the gig. It was a superb show by a band on incredible form and Michael's review gives you a feel of what we all felt last night. I'm already far too excited about the prospect of doing it all again in Manchester tomorrow. Thanks very much Michael and thank you for the setlist picture we see towards of the review. All other pictures are my own efforts. I don't think Anton has much to worry about....

All Your Stupid Ideals

Depeche Mode concerts are special nights out, we all know that. But when you get to share it with your wife and 3 kids it’s a different thing completely and for me last night in Dublin will be one that I’ll remember for a long time, a great night out with all of us together, very happy times and special family memories.

That’s just a personal note from myself, I can’t begin to review the concert without thanking them for coming to share it with me and being part of the global Depeche family for the night. There’s a couple of other people who helped to make it a special night for us, they shall remain nameless, they know who they are and they know how much it means to me and I think they could see a happy family at play!

So with the soppy stuff out of the way, Depeche are back in Europe, back indoors and back doing what they do best. Dublin was chosen as the first stop on this the 3rd leg of the Global Spirit Tour, a city that often sees tour openers from the top headline acts, testing out their wares on the Irish before trucks and tour infrastructure move across the Irish Sea to multiple shows in arenas around Britain. 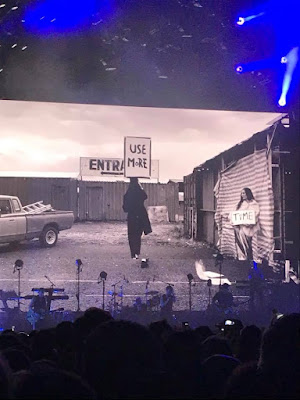 In preparing to review this show, my thoughts prior to travelling south from the north were to the previous tours and shows at this venue. The band came back to Dublin in 2006, the first time since the infamous Devotional Tour show in 1993 and gave Dublin possibly the best Monday night out the city has ever seen. There was justification for returning that night and economically and spiritually it was confirmed that the Irish audience hadn’t gone away and was as electric as any they’d see on that tour. Since then, the newly refurbished and rebranded 02/3 Arena has hosted the Tour of the Universe and the Delta Machine Tour both of which were shows on a par with anything I’d witnessed anywhere else in Europe.

So with that in mind, Dublin had a lot to live up to last night I guess. I wasn’t really worried that it wouldn’t again reach those heights, it has fairly cemented its place as one of those Arenas that as a fan you just must get to. The buzz amongst the cosmopolitan masses that began to fill the city’s bars as the afternoon progressed was a good sign, as the many accents and nationalities high-fived, hugged and reacquainted themselves with each other, all soul sisters and soul brothers, together again.

So to the band then. Many of you have attended multiple shows since we started back in May was it? Maybe formally in May and informally prior to that with the special promotional shows. So you’ll be familiar with the show and the song selection which didn’t vary much during Europe leg 1 or North America leg 2 apart from a few of those multi-night dates where they mixed it up a little. So probably fair to say most of us weren’t expecting too many changes although the four night run in Los Angeles that did see quite a few changes gave us some hope. 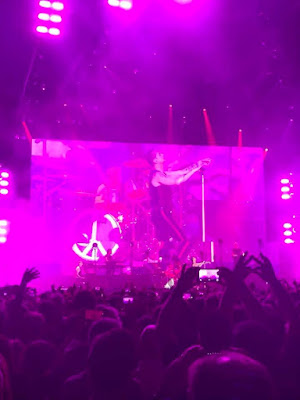 If you read my review of London Stadium (http://almostpredictablealmost1.blogspot.co.uk/2017/06/live-review-depeche-mode-london-stadium_7.html) or Madison Square Garden night 1(http://almostpredictablealmost1.blogspot.co.uk/2017/09/live-review-depeche-mode-madison-square.html) , you’ll know that I don’t like to run you through from Going Backwards to Personal Jesus noting everything in-between. That said, it wasn’t long before evidence of change was produced in the form of It’s No Good replacing the high energy Spirit track So Much Love. Useless also was introduced fairly early on accompanied by a great new Anton Corbijn film that carries the DNA of his iconic works for the band. I caught sight of him scribbling notes while sitting at the mixing desk, I wonder what he was writing? Credit once again to Kerry Hopwood for his work in re-presenting Useless as part of this live set, with what has become a superb feature of his work on this tour – a new and innovative opening to the track. Other examples that have received similar treatment include World In My Eyes, Walking In My Shoes and Everything Counts to pick out the obvious ones. Can’t see many devotees or casual concert goers not appreciating Useless on this tour, great addition.

Precious was a new addition (I think) for the European audience (LA got it previous) and kicked off the 2nd half of the show which was to prove a total hit-fest and quite pacey when compared to what I had seen both in Europe’s stadiums and in North America. Three further changes to the 2nd half contributed to this increase in pace that seen no let-up all the way to the final stage bow. So where Stripped and "Heroes" may have reduced the noise levels a bit, tour debuts for Halo and A Question Of Time and the re-introduction of Policy Of Truth all helped to keep excitement and noise levels to the max right to the end. The biggest bonus of all for myself was not the addition of any song in particular, it was the red card dished out to I Feel You, long overdue not because it’s not a great song, only because it has been ever present on Depeche tours since 1993 and I know I wasn’t alone in wanting it gone, if only to give something else an opportunity. Dave has never hidden his love for signing it live but I never classed it as one of the ‘untouchable’ songs, I wonder how that one played out behind closed doors? 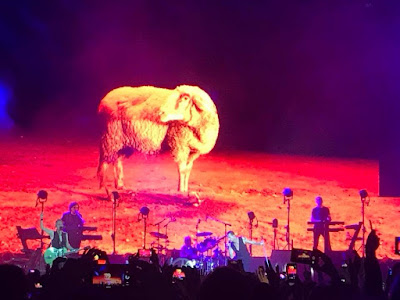 It’s not a negative as such, just an observation, but the above changes, if they are to remain, have changed the fabric of the show a little. I’ve highlighted where I think they’ve added to the overall experience but we’re left with only 3 songs from the Spirit release. Trading Standards may be ready to engage with Baron Kessler Inc. for misrepresenting what consumers have bought into here, I for one would like a couple more from Spirit and was slightly disappointed that a new Spirit song was debuted last night, something like Scum, You Move or Worst Crime…ok leave me alone, I love Worst Crime and won’t have a bad word said about it!

So not much to complain about in what was another special night in Dublin. One thing to note visually is that we seem to have lost the side screens that complimented the central ones (for the stadium shows) as part of the visual presentation. Ok, so I know they can’t be accommodated in all venues, but in Dublin, in this venue and on the last tour I thought they helped to frame the stage better adding to the overall wow-factor. Will they re-appear or are they gone for good? Not sure about that, I suspect they’re gone, another question I’m sure visual director Corbijn will answer in due course. 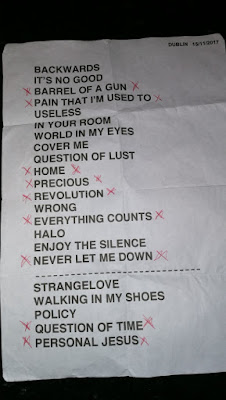 So on it goes, the trucks and tour infrastructure are making their way across the Irish Sea where Manchester and Birmingham will be next to show so much love, and across Europe and even further afield planes, trains and automobiles are being filled with expectant devotees looking for their next fix. If you’re on route to the Global Spirit Tour over the next few days I hope your experience is as good as mine was in Dublin.

If you’ve stayed with me throughout this piece, you are to be commended, I realise I’ve just taken up a fair chunk of your day but I hope you got some flavour of what it was like in Dublin last night. I’ll finish with thanks to David McElroy for asking me to write on Dublin (and NYC1 previously) and congratulate him on his Almost Predictable Al,ost tour blog project, over 100,000 views last time he reported so it’s obviously a much valued resource for fans and casuals alike in keeping abreast of tour developments. If all goes to plan and I keep out of trouble, I should be back in March writing about Mexico 1, my first show ever in South America, that’ll be very exciting for me and my travelling companions.

Until then, thank you very much, I’ll see you next time, goodnight, thank you!

Thanks very much Michael and thank you for the kind words.