I knew this project would be an odd experience and it certainly is, but one great consequence of it is making new friends in the Depeche world. One of them is Claudia Schulzi who I've met at a few gigs which is cool and, even though she's contributed so much to this blog already, she volunteered to review the Cologne gig last week. I was delighted as her reviews here and on her superb My Daily Mode Blog site are always a great read. The day of the Cologne gig was also Claudia's birthday and as you'll see, she got a rather nice present from Mr Gahan. Thank you so much for this and the pictures Claudia. 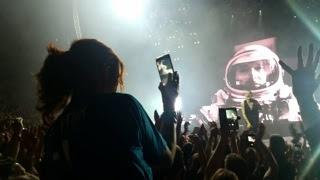 Good evening everybody, my name is Claudia, I wrote the Manchester review and was a part of the Hamburg review.

I'm so happy to write the review about Cologne, because it was my 52nd birthday and Cologne is my hometown. Can you imagine a better birthday party?

I'm the owner of my own small Depeche Mode Tour blog, David is a part of it now:

We came back on Sunday from Amsterdam and we met many friends in a great vegan restaurant "Bunte Burger". I'm vegan, but the most of my friends are not, but we had a wonderful evening, devotees from different cities, even different continents. Two friends from Tampa arrived to see Depeche Mode in Germany. I'm not sure if there is another band which such good devoted fans.

We had the little hope that Martin Gore will come for dinner to this restaurant, but he didn't.

Later I heard the band stayed in Dusseldorf for the two days, not in Cologne.

Dusseldorf is the neighbourhood city, not far away, smaller, but luxurious.

Next evening we met us all a few hours before the concert in the restaurant in front of the Lanxess arena. Another friend of mine, André has birthday, too, so we celebrated it together with many friends.

And so we went into the arena with such a large group of friends, an amazing warm and embraced feeling.

My expectations were not very high, concerts in the Lanxess Arena are often not very good, bad sound and the audience .... well, the people of Cologne have too many parties.

It often comes differently than you think and luckily it was the same here in Cologne.

From the first minute everybody was standing and the Cologne people greeted Depeche Mode with a huge applause.

I felt so good, everybody brought me drinks, everybody wanted to embrace me, wanted to take pictures with me, can't describe how I felt. Happy, happier, the happiest....happiest girl! 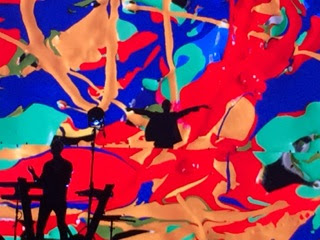 Mr. Gahan was in such an unbelievable mood. A friend said: "something has changed in his mind and yes, that's so true. Never saw him so relaxed like on this tour....touching hands, smiling....

The tempo was really fast in Cologne, it was an amazing feeling to see how my friends enjoyed Depeche Mode. Many of my friends came just for me, not because they are fans. Everyone knows and loves Depeche Mode, but a real fan, no.

They were all conquered by the Mr Gahan.

The magician who cast a spell on everyone!

The strong devotees and the fans, just for one day. To unite everyone, that's true art.

The whole concert was a party, but yes, there was one best moment.

I got many wonderful gifts from my friends this evening but the best present gave my friend Micheal to me.

He took me on his shoulders at Cover Me. You all know the moment when Dave is dancing to the end of the catwalk.

He shook hands, let himself be touched, formed a heart for the fans with his hands and made his "Man in Space" dance.

He must have seen me all the time, because I was at his height, but he ignored me, but then suddenly he turned to me, looked at me, threw me a kiss, I threw one back and then he knocked several times on his heart and then stayed for a while in this pose while he smiled at me.

I needed a small pause and went out to the restrooms. Many people spoke to me and said, wow, happy you.

The concert went on in this unbelievable mood. Sometimes I didn't like it when the people go crazy to the hits, but the Cologne people celebrated all songs and they went really crazy to the hits like  Home,  Everything Counts ( Dave thanked with "Dankeschön), Enjoy The Silence and Never Let Me Down. I spent another two times on the shoulders of Michael and Thomas. Thank you guys for this unforgettable moments. 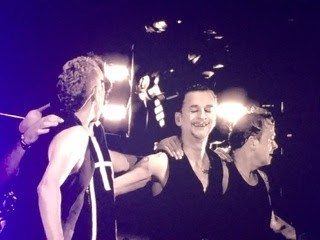 To fast the concert came to the encore.

I gave really all I had at Personal Jesus. I love my life, I'm a really happy women, but if life had ended in that moment, it would have been fine. Surrounded with your dearest friends, your family, your "Personal Jesus", singing and dancing to your favorite music? Perfect.

Together with Rome the best concert of the whole tour. And I thank you all my friends and family, Depeche Mode and Mr. Gahan for this unforgettable birthday.