Who saw The Things You Said coming then? It's nice to still get a surprise or two as a tour this long rumbles on so that song returning really was a treat on night 1 of leg 5. Would it stay in the set however or would they do a Halo in Dublin and bin it after one night? The answer would become clear in Sacramento and Kristin Vogel-Campbell was there to review it for the blog. Kristin has previously reviewed night 1 at the Hollywood Bowl for this project and she's one of the reviewers I've managed to meet up with on the tour so it's great to have her back. Thanks for the review and pictures Kristin. Any pictures that aren't hers are credited. 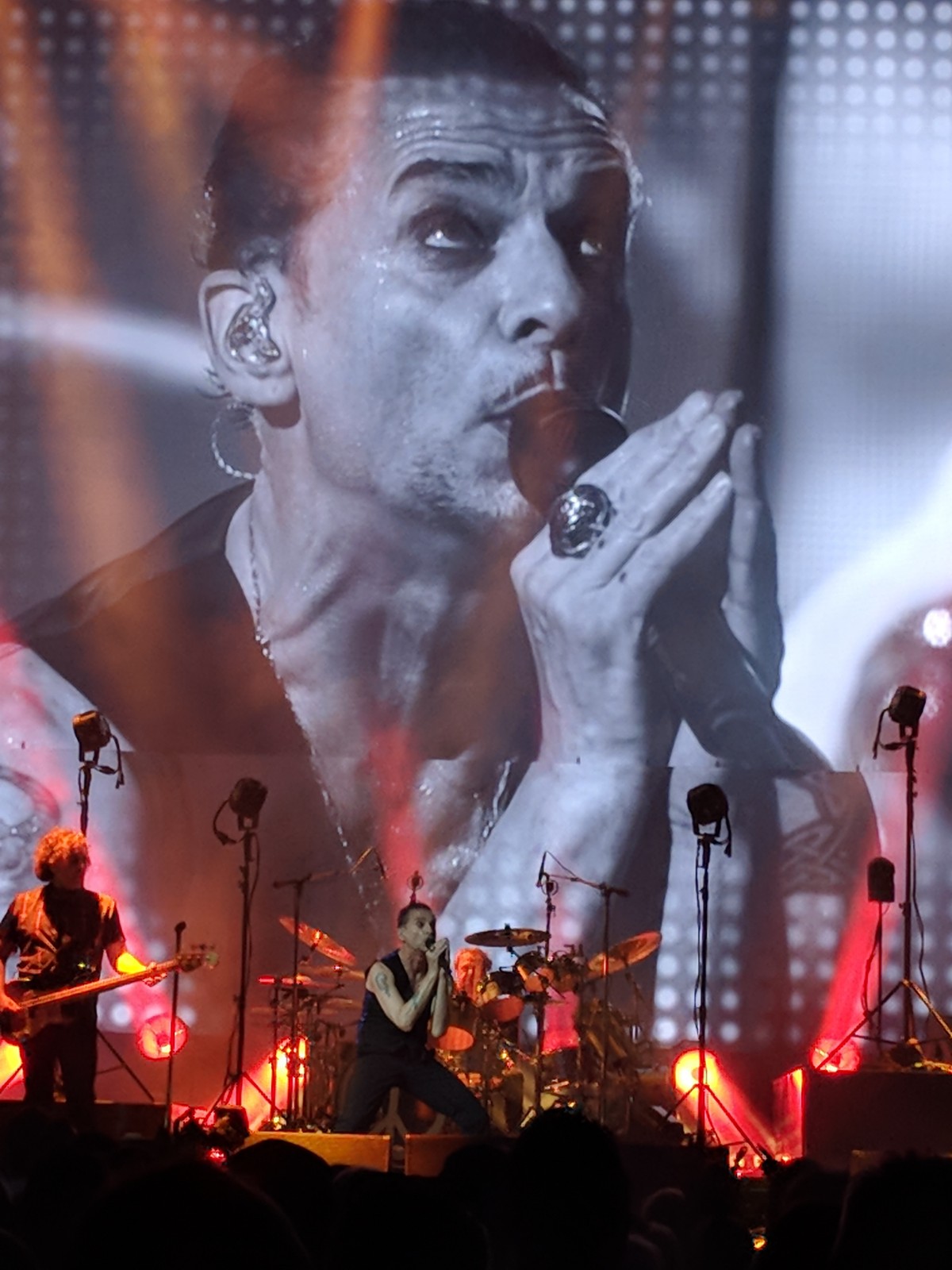 I’m extremely lucky and privileged to be able to travel and see my favorite band in the world, Depeche Mode. One of the greatest gifts I’ve received as a result of following this band is the friendships I have made along the way. Some have faded as the years have progressed, some have imploded for one reason or another, and some have yet to fully blossom. Going to a Depeche Mode concert isn’t just about the music, as you probably know at this point. It’s about the human connections, seeing some of your dearests once every four years. That’s what has kept me one of the devout for all of these years, and will continue as the year go on.

After having seen Depeche Mode eleven times last year, both in the States and in the UK, I was perfectly content with waiting and saving for the next few years. And then….the band announces they are coming back to the US for a handful of shows! Immediately the anxiety of purchasing the right tickets and not breaking the bank return. I was definitely excited to see DM make a stop in Sacramento, about two hours from my home in San Francisco. While Oakland and San Jose are more convenient by far, the Golden 1 Center in Sacramento (which opened up in late 2016) is a fantastic spot to see a concert, with plenty of meet up spots nearby.

Tickets go on sale, and I manage to get 16th row floor seats for myself and my friend Kelly. Kelly and I met on the Depeche Mode Message Board over ten years ago and until the day of the concert, has never met in person.

In homage to my friend Jamie Highland’s “Train of Pain” endeavor, I chose to take Amtrak to the show. Kelly also took Amtrak and we met in the station and basically started talking back and forth while we had known each other in real life for decades. That’s just how it is with Depeche Mode fans.

After taking in some of the local sights with another friend, Kelly and I headed back to our hotel to prep and preen for the show, and then made it over to the Golden 1 Center, where we started running into friends. Being amongst other like-minded friends, this is where the pre-concert hype really starts! After chatting with some people outside the venue, it’s time to go in. Black Rebel Motorcycle Club is playing as we walk inside the venue. Unfortunately, the line for alcohol is too long and we don’t make it to our seats before they leave the stage. 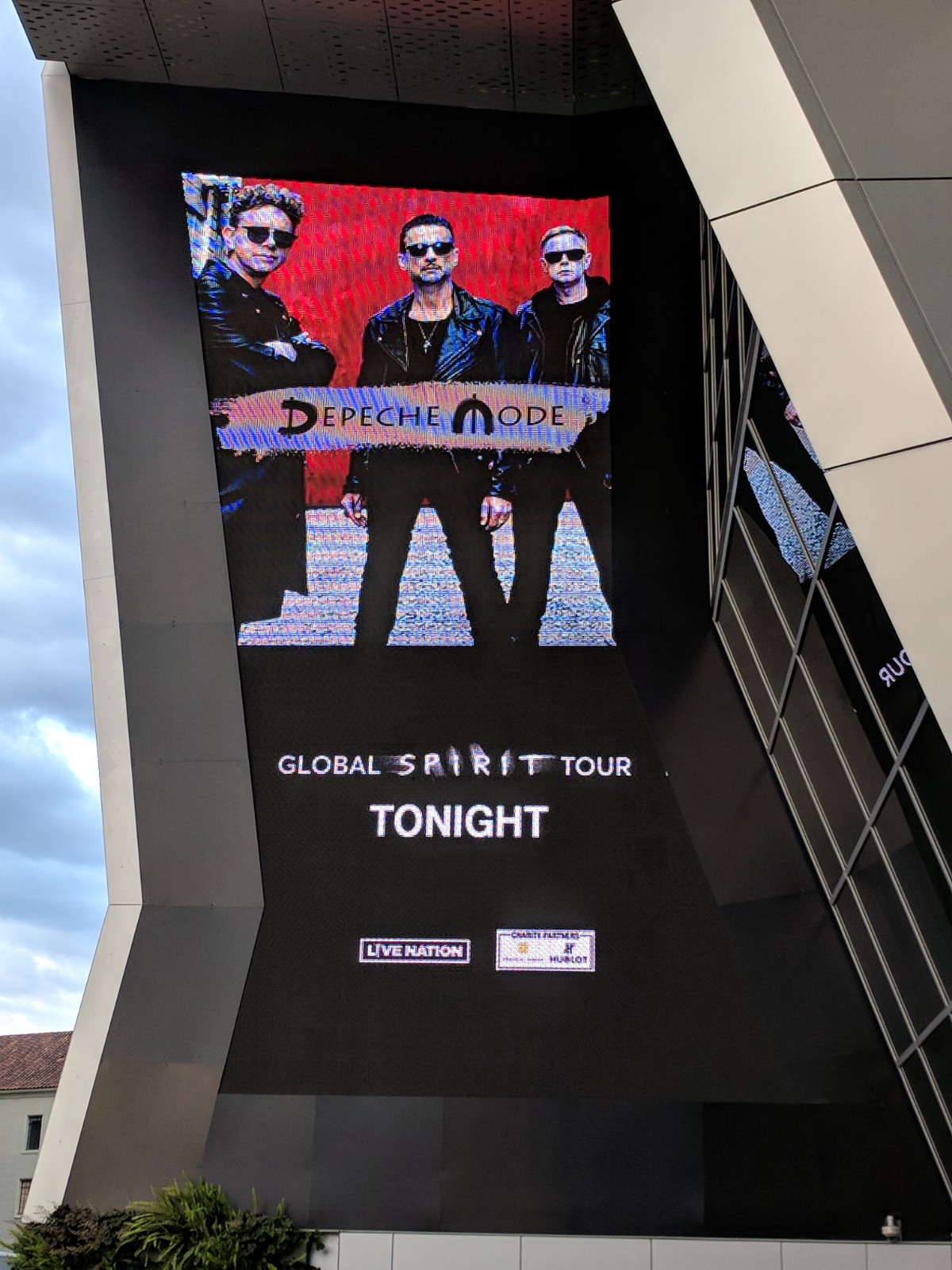 We get to our seats during the pre-show music that we are all so familiar with at this point. When I bought our tickets I was excited for our 17th row seats...but didn’t realize they were dead center! Tickets for Sacramento were also significantly less expensive than the other show in California in Anaheim, which was one of the main reasons I didn’t do both shows.

You can’t really beat this view.. 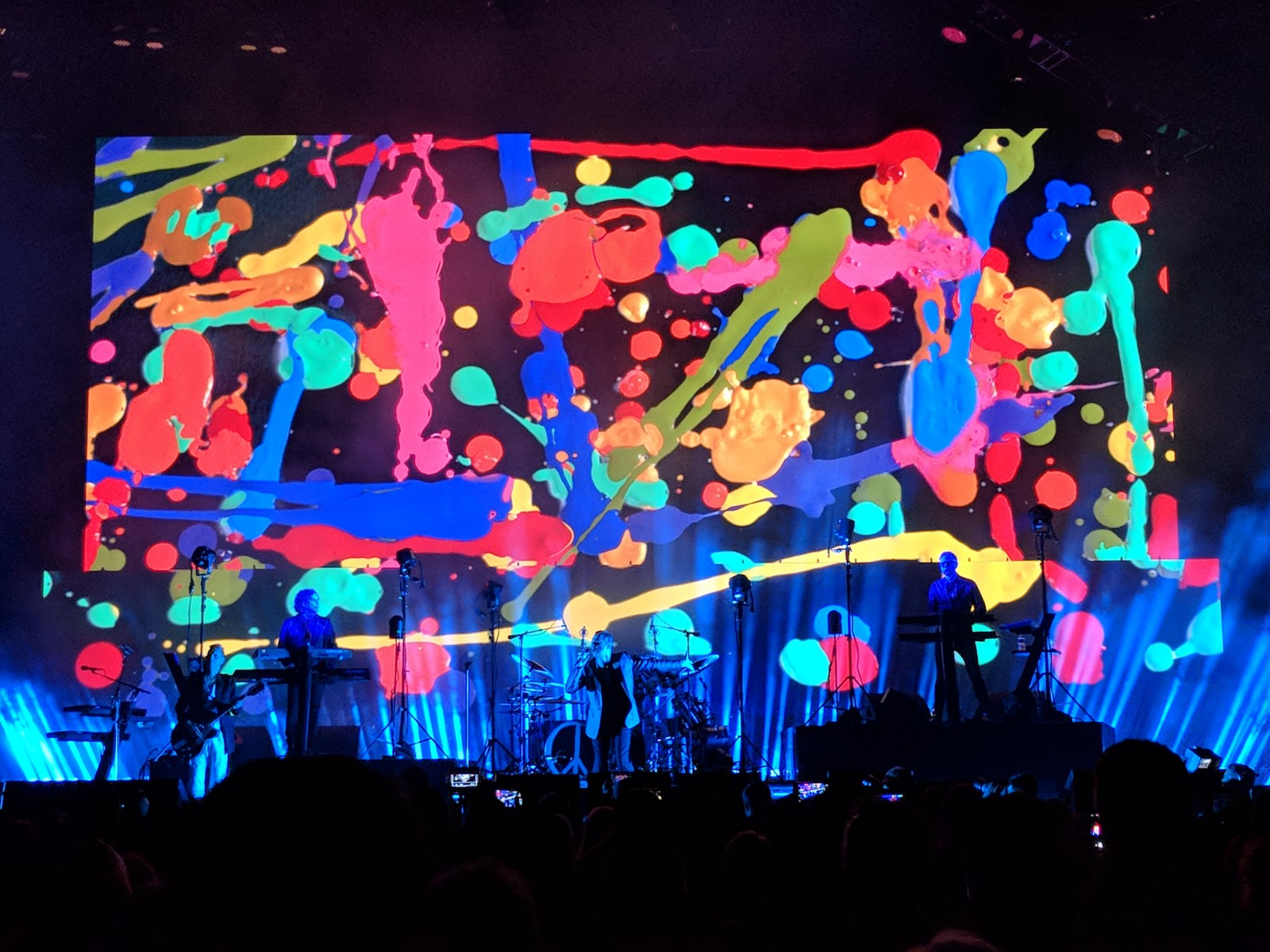 The setlist for the Sacramento show mirrored the setlist from Tuesday night’s show, which was reviewed by the spectacular Rob Rohm, including THOSE TWO SONGS that the collective worldwide Black Swarm freaked out over when the setlist leaked. Right from the start, the entire band looked and felt very fresh and rested. Dave was all over the stage, and was full of energy. This onstage energy translated to the crowd throughout the entire the show. Everyone around us was up, dancing, and singing the entire time….with one exception. There was a drunk couple in the row right in front of us who were participating in some very private behaviors out in the public. It took us all the way until Home to have them removed, mainly because the woman appeared to be too intoxicated to make her own decisions. What was funny at first became slightly scary, but thankfully security took care of her.

During Barrel Of A Gun Dave either forgot the words to the second verse, or the microphone went temporarily out (I am guessing it was the former). Didn’t affect the performance one bit, but I always find it slightly amusing when we see a slip up. Just goes to show that Dave is human, just like the rest of us.

Our vantage point for Cover Me was probably the best of the twelve shows I have seen on this tour. The end of the catwalk was to our right, about four rows up. This has become one of my favorite parts of the shows from this tour, especially seeing how much Dave was enjoying himself in Sacramento. I am not one to take video during shows, but I had to capture it from our vantage point. I’m glad I have that memory. 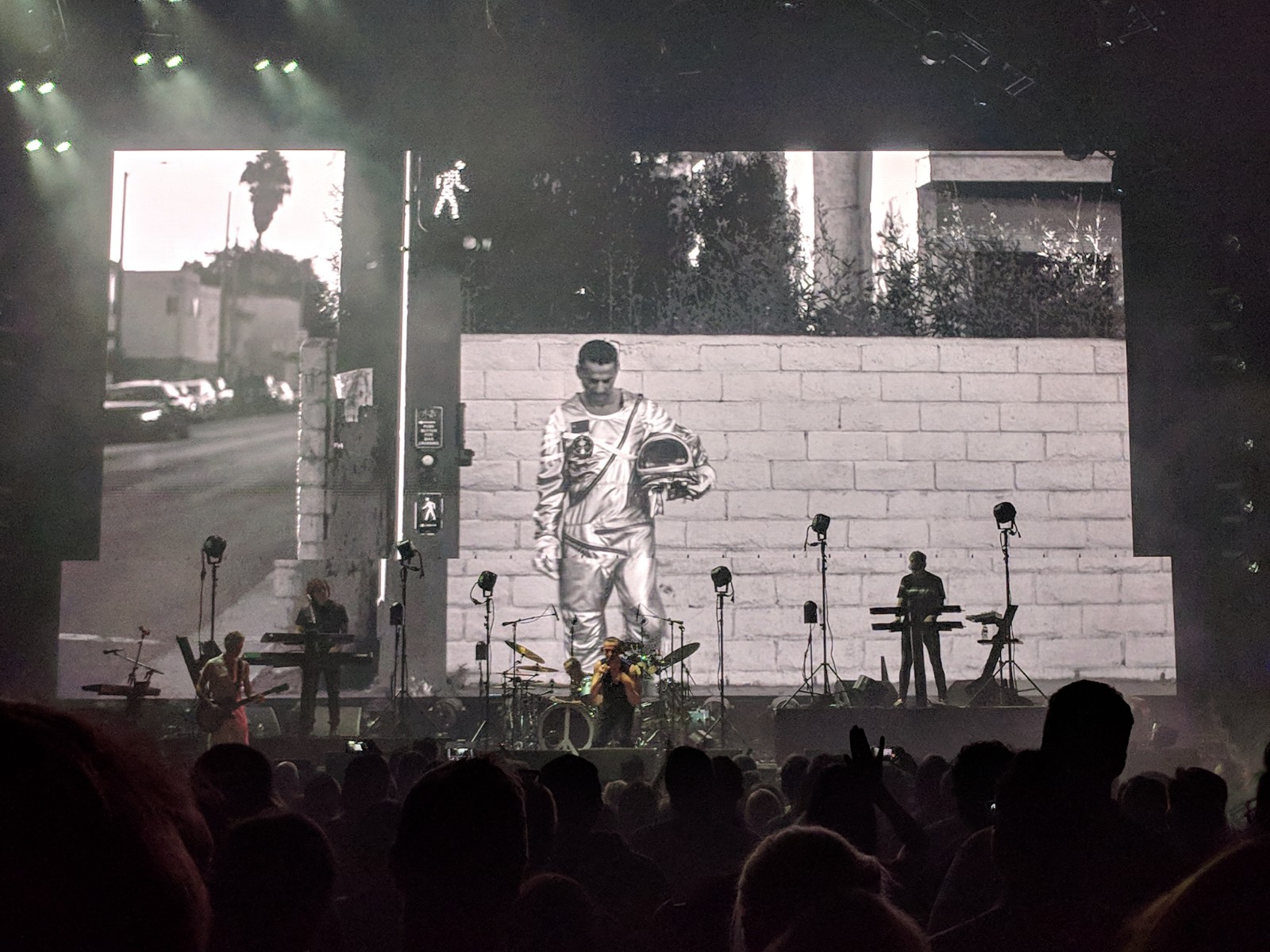 Now the moment we were all waiting for: would Martin sing The Things You Said?! I know how excited I was when I heard the band had performed Halo in Dublin, only to have it removed from the setlist for my shows in the UK. Martin comes out in his beautiful white linen suit, and….IT BEGINS. Not too many people around us recognized the beginning synth line, but Kelly and I screamed like those girls in 101. Just in case anyone was recording us for posterity, we knew all of the lines and didn’t mess them up like that poor girl captured on camera in the movie.

The audience at the Golden 1 Center was the loudest of any Depeche Mode concert I have been to, save the crowd at The Royal Albert Show in 2010. Sorry Hollywood Bowl, you were definitely outmatched here. In an arena show in America, I could hear the crowd trying to start the “ooooooh….OOOOHHHHHHH” at the end of Home. It didn’t catch on, but it was coming from in front of me (naturally, where all the $600-900 ticket holders are), as well as behind me (the common people). I was also completely overwhelmed by how loud the audience was after Never Let Me Down Again and when Martin came out for the beginning of the encore. The sound was almost deafening, and it was come from all around. People also turned on the lights on their cell phones and were waving them back and forth. The screams went on for a good three to four minutes. Northern California, you truly are the best.

As expected, Martin performed I Want You Now, which is probably one of my favorite songs that he sings. If anyone took video during this song, you may hear a banshee-like screech coming from the middle of the floor (that would be me). The rest of the encore was almost predictable...almost (see what I did there? - hooray! APA), with the deletion of I Feel You. At this point in the set, I am on autopilot as a fan, and already thinking about the walk to the afterparty and how my feet are NOT going to like me in the morning. Try Walking In My Shoes indeed. I was wearing 3 inch wedges, not 6-7 inch heels like the subject of Anton’s accompanying video.

The band finishes Personal Jesus and comes to the front of the stage to take their bows, save poor Fletch who manages a slight bend. Is this the last time I am seeing Depeche Mode? Could this have been it? Dave said “see you next time”...so it’s can’t be it. I am holding you to your word Mr. Gahan.

Being a Thursday night before a three day holiday weekend in the States, I was expecting more people to come out to the afterparty, at the pleasantly named Knobs and Knockers. I did get to catch up with a dear friend who lives in Southern California, and spent some time with Kelly and another friend, who showed up looking very Alan Wilder-esque in a gorgeous leather jacket. Post-concert bliss is a lovely thing, and we eventually made it back to the hotel room around 2:45am after a night of dancing and basking in the afterglow.

I’ve said it many times, but I need to say it again. Thank you Depeche Mode for the gift of friendship. I cannot even begin to name all of the connections I’ve made, but they have truly made me a better person. “Finally I’ve found that I belong here.”