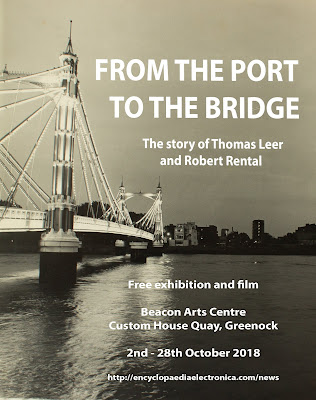 Port Glasgow is not perhaps the first place you think of when you start preparing a list of Scotland's most influential music hotspots, but as the forthcoming exhibition From The Port To The Bridge shows, it certainly should be near the top of that list. From an electronic music point of view, it surely has to be at the top.

The exhibition tells the story of Robert Rental And Thomas Leer both of whom were born in Port Glasgow. They moved to London in the late 1970's and became deeply involved in the post punk scene. Rental's Paralysis and Leer's Private Plane along with The Normal's Warm Leatherette/T.V.O.D. are three key electronic post punk singles, all released close to each other and all still sounding as fresh as they did on release. Rental and Leer then collaborated, releasing the outstanding album, The Bridge on Throbbing Gristle's Industrial Records in 1979. This is a hugely important album as its influence spreads far and wide from early Depeche Mode and New Order to industrial electronica. The Bridge is perhaps overlooked in favour of early Cabaret Voltaire or Human League in any discussion about the early U.K electronic scene and that is grossly unfair.

Robert Rental became friends with Mute boss Daniel Miller, the pair having met at a Throbbing Gristle gig. They toured together in 1979 supporting Stiff Little Fingers on a Rough Trade tour and playing a couple of shows in Paris. A single sided live album was released on Rough Trade in 1980 and it's a really interesting record well worth checking out. The pair's relationship also led to Robert releasing a single on Mute, the superb Double Heart (MUTE10) but that record marked the end of Robert's recording career. Sadly, he passed away in 2000. 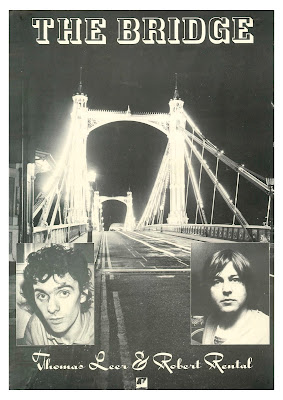 Thomas Leer's career saw him release a number of solo records, collaborate with The The on Soul Mining and form Act with Claudia Brucken, formerly of Propaganda, in 1987 with an album and singles released on ZTT. There was little heard of Thomas in the 1990's but, following a return to Greenock in the early part of this century, his back catalogue has been reiussed on various labels and today he continues to release previously unheard music via his Bandcamp page.

From The Port To The Bridge tells the story of both of these hugely influential and much admired Scottish musicians. The exhibition features a documentary starring the likes of Daniel Miller, Matt Johnson, Chris Carter and Cosey Fanni Tutti, memorabilia, original material and personal artefacts, the original reel to reel tapes the men used and much more. It is going to be unmissable and is a must see for all fans of electronic music. It is only fair that the stories of Robert Rental and Thomas Leer are told and From The Port To The Bridge will do that and much, much more.

From The Port To The Bridge runs from 2nd to 28th October at The Beacon Arts Centre Greenock.