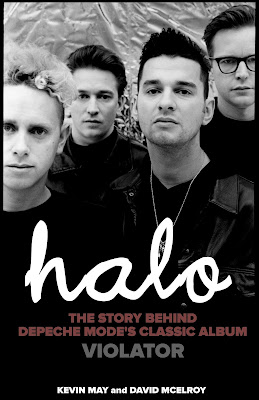 HALO - A NEW BOOK BY KEVIN MAY AND DAVID McELROY


Today is the 29th anniversary of the release of Violator, Depeche Mode’s finest album and an album which I seem to have spent the last 29 years telling anyone who would listen just how important an album it is.

Next year, the album turns 30 and my intention is to repeat the idea of the month-long Black Celebration – A Month Long Period Of Rejoicing blog I ran in March 2016 with a month’s worth of articles by me and a number of other contributors looking at Violator from every conceivable angle.

One of those contributors will be Kevin May, author of Halo, a man who possibly knows more about Violator than the band themselves.

Kevin had originally planned to release Halo in 2015 but events overtook him somewhat, meaning that the book was unfortunately delayed. It will now be released in 2020 to celebrate Violator’s 30th anniversary and I’m delighted and very proud to announce that Kevin has asked me to co-author the book. It was a real honour to be asked and I was only too happy to accept.

Halo, the book version, will feature all the original interviews, story, analysis and fan contributions that Kevin has worked so hard on. Trust me, you’re going to love what Kevin has done. The book will now also feature additional elements from me and other blog contributors, many of which will be teased during the blog’s Violator month in March 2020.

The release of Halo in paperback, Kindle and other digital formats will come at the conclusion of that online series – as close to March 31st 2020 as we can get it!

I’m really thrilled to be involved in Halo as I know how keenly the Depeche Mode fanbase is anticipating it. I hope that the additional content that I provide will add to what is already a hugely exciting project.