AN ASSORTED COLLECTION OF PERFECTION - DEPECHE MODE: VIOLATOR - THE 12" SINGLES 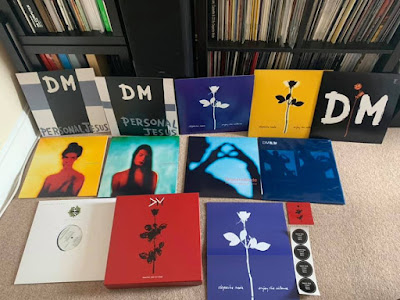 You might think that spending months researching and writing a month long Violator special would mean that I have nothing else to say about the album given that, with the help of my guest bloggers, every single inch of the album was explored, analysed and, let's be honest, relentlessly praised in March this year.

That would probably be the case had the new Violator - The 12" Singles box not arrived this morning. It's the next instalment of Depeche Mode's 12" boxset campaign, a campaign that has been a joy so far. This boxset has been my and many other fans most keenly anticipated release as it is recreating the band's releases from their artistic (both musically and visually) highpoint. Can these reissues of iconic singles match the originals? Are they as beautiful as the likes of my much loved and much travelled L12BONG18?

Of course they are. This boxset is everything it promised to be and much, much more. 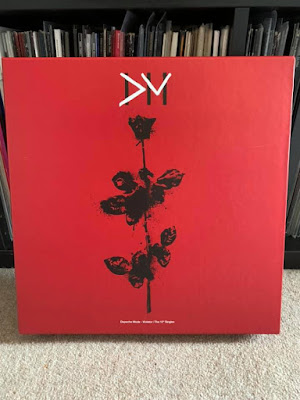 As Julie Andrews said, let's start at the very beginning. The box itself (front above) is a lovely thing. As with the other releases, it features a re-interpretation of the album artwork and the job that has been done is great. The back of the box has one of those explanatory stuck on bits of paper that is basically pointless but acts as a nice reminder of what's inside: 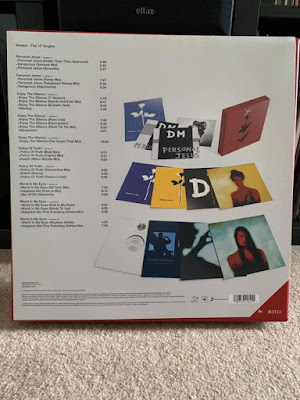 It's especially handy if you don't open the box as it tells you just what you're missing out on. I always take the view that music is to be enjoyed not hidden away, so I always open these up. Some people don't and that is of course fine. Each to their own and I can confidently back that up having written blogs about catalogue numbers and all that nonsense previously. Anyway, enough of the box, let's look at its contents.

At this point, you may be worrying that I am going to spend a large amount of time reviewing the remixes that feature here and droning on things that the vast majority of the population of Earth have little time for. Don't worry - that's not going to happen. I covered all that at almost ridiculous length in March, so if you want to read all about the singles themselves, have a click on the links below, have a read, then have a lie down and pop back here to carry on where you left off:

Personal Jesus - reach out and click here
Enjoy The Silence - come clicking in, into the blog's world
Policy Of Truth - It could have been sol clickified
World In My Eyes - let me take you on a click

Back to it. The 12" of Personal Jesus is faithfully and beautifully recreated as you would expect. Being reminded of just how stunning the artwork is for this release is never a bad thing. The limited edition 12" is recreated too and it's here that we get a couple of very nice surprises.

Housed within the sleeve is a stunning double sided 12" artwork which features all four then members of the band (apparently Alan Wilder left a while ago. I had no idea) in their awkward poses with the model who features on all the releases. It was a huge surprise to find this and it is a wonderful addition to this set. The little additions that have been made throughout this campaign have been a real joy; tiny fan pleasing details that show incredible attention to detail.

When Personal Jesus first came out, there was a limited edition 7" gatefold release and, within the gatefold, there was a booklet that contained the pictures we now find in bigger form in this release. Their recreation here is a special touch.

Enjoy The Silence is next. It is of course beautiful:

The limited edition 12" is just as gorgeous: 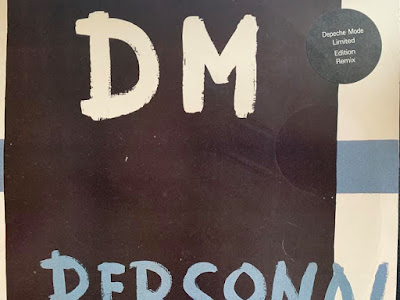 The 12" singles in the box don't have these stickers on them but, and this is VERY much the sort of thing that tickles me, the boxset includes replica stickers in case you want to stick them on yourself. They really have gone to quite extreme lengths to exactly replicate, or at least give you the chance to exactly replicate the original releases. There are four stickers but, as far as I'm aware, the original limited editions of the other two singles from the album didn't have those stickers on them. That's not a criticism by the way; it's just my reflex Depeche Mode geek reaction kicking in unstoppably. Here are the stickers: 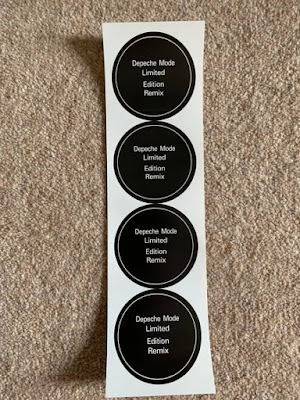 Clever stuff. 1990 of course gave us the band's first ever Extra Limited 12", XL12BONG18. As you know, it features one track only, Enjoy The Silence - The Quad: Final Mix and the record itself is a one sided affair with glorious DM etching on the b-side. It is recreated here and is quite magnificent:


The etched b-side is of course present, along with the majestic inner sleeve:


Just look at that. Sigh.

Policy Of Truth is next in all its shiny glory:

The orignial limited 12" came in a gatefold sleeve with a glorious all-black inner sleeve. Will the boxset recreate that?


Of course it will.

The fourth and final single from the album was of course World In My Eyes. Let's get the easy bit out of the way - the standard 12":

Iconic, majestic and many other over the top adjectives - this single is probably my favourite Depeche release in terms of artwork. As you will have read in my blog about the single I linked to earlier (if not, have a look at it will help with this bit), the limited edition 12" of this release was an absolute stunner. It was housed in a blue gel pack that needed to be cut open ("Violate here" - genius) to reveal the gorgeous, glossy wonder inside with an inner sleeve bejewelled in drool inducing World Violation tour pictures. Surely recreating that would be a bridge too far? Blue gel sleeves may have been possible in 1990 when the world was young, more innocent and contained a record industry mad enough to pull off a stunt like that, but this is 2020. We are all more cynical and we don't have time to spend cutting open blue gel sleeves when people need to be online moaning about wearing masks that actually stop people dying and so on. A replica of the 12" that the original release contained would surely be all we could expect here and that would be fine.

Well, at long last, 2020 has improved. There is a freshness in the air, an almost 1990-like feel in fact and that is because blue gel packs are very much back in fashion. Yes, the absolute masterminds involved in this project have once again come up trumps as the limited edition 12" recreation we find is is VERY much encased in a sealed blue sleeve:

The sleeve is recreated perfectly. On the Alan and Andy side (above), their icons are present in the top left, and on the Martin and Dave side, theirs are there too. Crucially, the best part of the original sleeve is also right where it should be:

Now, in 1990 I was young and stupid enough to horse right into this package, cutting it open for some arsewitted reason on the side rather than along the suggested violation line. I was also stupid enough not to buy a spare and have snared a couple on unopened versions later in life. If this blog has a role in the world, it is to show you parts of the Depeche Mode universe other blogs don't reach. I am not going to open this record up however as that would be madness. Sorry about that. I will presume that the inner sleeve matches the original release, so here is a fully violated L12BONG20 from 1990 to show you what is inside:


For completeness' sake, here's another:

Truth be told, I am slightly annoyed that I can't see just what is inside the re-issue, but I shall stay strong. To regain some pedantry points, I should point out that the re-issue blue gel sleeve is a thinner material than the original release which was also much firmer and a little roomier. The original also had a sticker on the back with the barcode, L12BONG20 and the Mute logo on it which this doesn't but that is far from being a criticism. Finally, the re-issue weighs 305g when sealed, heavier than the original sealed version's 280g.

There have been nice added bonus 12" singles in the reissue series before, and once again we are spolied here with a reproduction of the promo single for World In My Eyes, P12BONG20:

Many people simply and quite correctly don't have the time in their life to chase around after promos, so this will be a first for a lot of people I presume The record is housed in one of the much missed and much loved Mute promo 12" sleeves although this one is thicker than the sleeves originally were. That allows it to have a catalogue number on the spine and, as I am sure you can all guess, that is a very good thing indeed. Look how lovely it is: 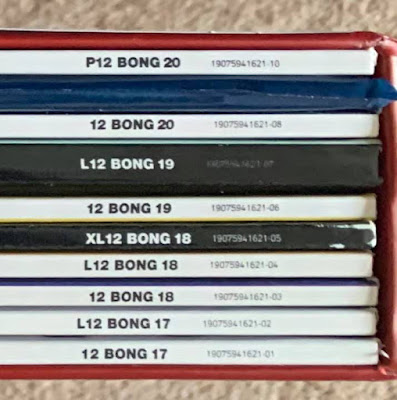 This promo 12" reproduction was already advertised and is a welcome addition to the box. With that, the additional Personal Jesus artwork and the stickers, we are really being spolied this time.

Finally, as with the previous boxsets there is a poster. It is of course a work of art beyond compare: 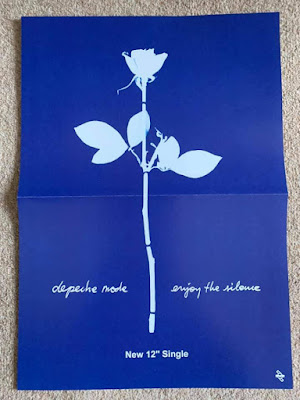 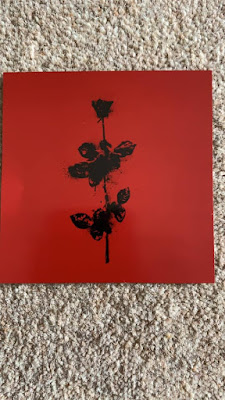 And that is that.

This whole series has been incredible and the Violator era boxset has actually surpassed the high expectations I had for it. The effort that has been put into this release from everyone involved is incredible and it really is something very special indeed. Ok, we may have these releases in multiple formats already, but when something as incredible as Violator exists in the world, it is worth celebrating it at every opportunity. This release does that and then some.