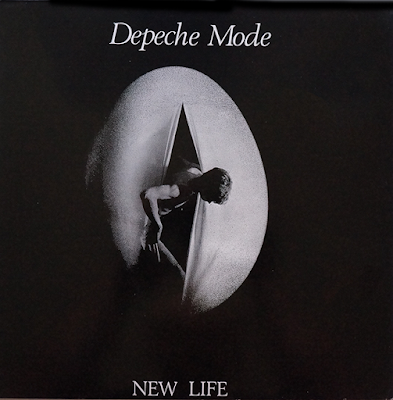 OPERATING, GENERATING - NEW LIFE
The Single
New Life was released on 13th June 1981 and had a 15 week run on  the UK charts. Starting off at 55, it then inched up to 54 before the band's debut appearance on Top Of The Pops on 25th June saw the single jump to 27, 21, 19, 15, 12 and then a chart high of 11. The single stopped frustratingly short of the Top 10, dropping to 15 the following week before exiting the charts via stops at 18, 31, 43, 57 and 74. A very pleasing performance however and the band's three performances on Top Of The Pops (25th June and 15th and 29th July) helped keep the single in the public eye. Each performance gave it new life in the charts in fact. Ho Ho.
The release of New Life also saw Depeche Mode receive their first cover appearance on UK pop magazine Smash Hits. Look at how young they look: 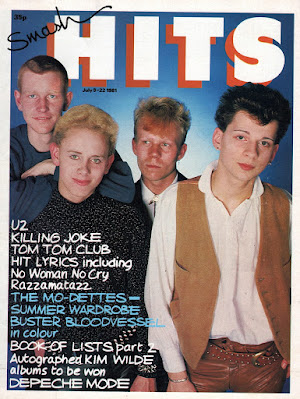 As well as an interview with the band, that edition of the magazine also featured the lyrics to New Life

New Life is another classic Vince penned pop song. He really is a master of this sort of thing and New Life fizzes, crackles and bursts with energy from the off, ending in a wildly enthusiastic four piece harmony ("Ahhhhh....." etc) before ending in a riot of electronics. Musically, it's far more intelligent and complex than you might think on first listen. If you want to keep it simple however, and if you want an example of a classic single from the synthpop era, this is it. 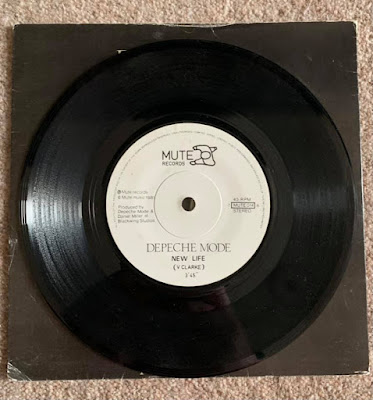 The press were fairly positive about the single. "This is the way honest synthpop should sound," said Steve Rapid quite correctly in Hot Press. Edwin Pouncey in Sounds said that the song was a "tinkly bonk excursion groping in the dark for the switch that will hopefully turn on the torchlight of success" which I think is a good review.
The song was a live favourite for a good few years being played live 235 times with its last live appearance coming on 30th July 1985 at the gig at Torwar Hall in Warsaw. 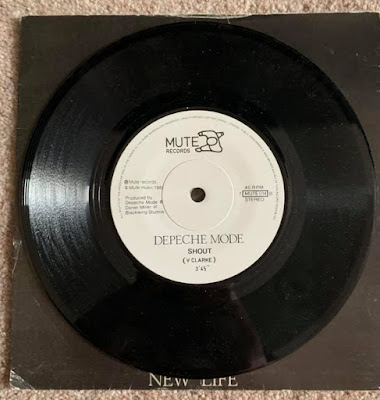 As with Dreaming Of Me, New Life had a b-side that stood out. Shout is a quite marvellous track that combines the darker feel of Ice Machine in its verses with a chorus that is pure Speak & Spell pop. Like Ice Machine, it's a gem of a song that deserves a wide audience and it's further proof that Depeche Mode were smarter than the average synthpop bear. The song was played live a lot by the band, appearing 163 times in live sets until its last airing, like New Life, on 30th July 1985 in Warsaw. You can hear a live version from Hammersmith Odeon on 25th October 1982 on the Love In Itself  limited edition 12" (see future blog for more about that).
One important thing to note about New Life is that it sold around 500,000 copies. That is an incredible figure and again shows just how many singles a band had to sell in 1981 to even get near to the Top 10 in the UK. 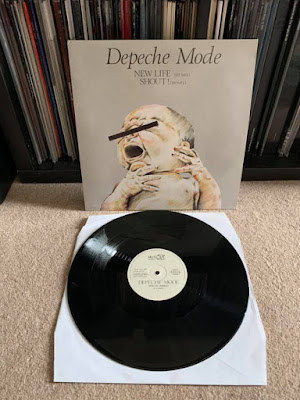 The Formats
As we've seen already, New Life came out on 7" single. The huge ever pulsating Depeche Mode collector brain depmod.com tells me that there are 8 different variations of the single some with different rims, others with differences only a trained eye could spot and a variation with New Life labels on both the a and b sides. Collect the set and impress your friends as long as those friends only like Depeche Mode.
The single also saw the release of the band's first 12" single and that set in motion years of releases with multiple formats in multiple countries making New Life the starting point for poverty among Depeche Mode collectors worldwide. The sleeve of the UK 12" and the record itself are pictured above.
The picture used on the 12" is sourced from a 1968 magazine called Mind Alive: 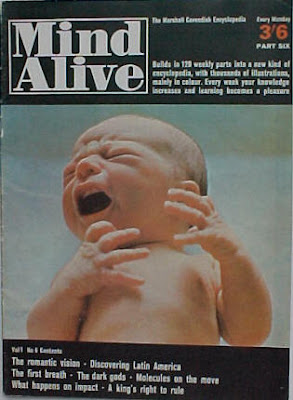 The image was also used on a Black Sabbath album cover. Their 1983 album Born Again, an album that I've not heard and can quite categorically state that I will never hear. The album looks like this: 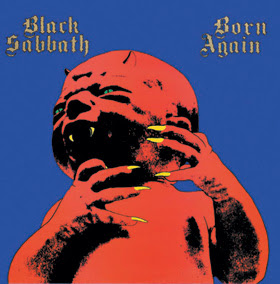 Grim. I prefer the Depeche Mode cover. The back of the New Life 12" looks like this: 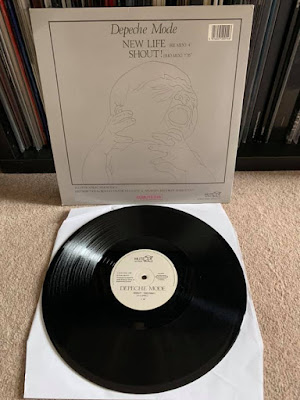 The 12" contains two tracks, both remixes by Daniel Miller. The snappily titled New Life (Re-Mix) is a a snappier version of the 7" single with a fantastic drum machine intro replacing the synth build up intro that you already know. The b-side is the real star here however. Shout (Rio Mix) is stunning and that is enough to make you forgive the puntastic remix title. The song is stretched out to over 7 minutes of experimental synthpop and during that time it bobs and weaves and ducks and dives all over the place to quite magnificent effect. If you haven't heard this remix you are missing out. Daniel used large parts of it in a DJ set of his I saw at the Short Circuit Mute event a few years ago so I presume it's a track he holds dear. If you are one of the readers hiding in collectors' corner, there are 6 variations of the 12". As ever, refer to depmod.com for all the juicy details.
The 1991 UK CD single reissue series combined features both 12" tracks plus the 7" version of Shout: 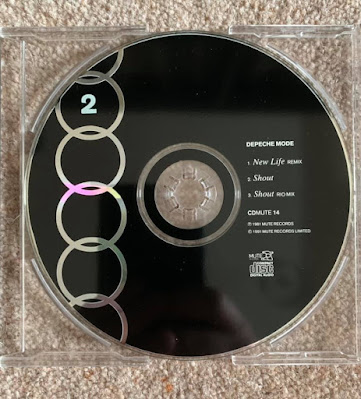 The single wasn't just released in Britain of course and it ended up appearing in Germany, Spain, Australia, France and New Zealand among others in either 7" or 12" formats.
I mentioned that New Life being the first UK multiple format release (well...2 format release) started off the never ending journey of Depeche Mode collecting for many people. Well, in West Germany, the band's label Intercord decided that black vinyl was not enough for Depeche Mode releases and so in 1987 they released a glorious marbled vinyl version which is really lovely: 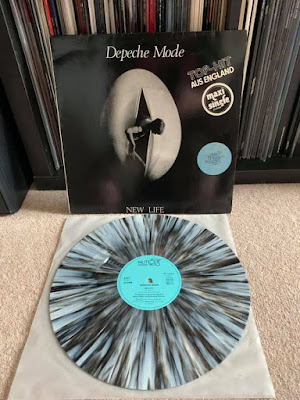 As you can see, the sleeve is the same as the UK 7", not the 12". It also proudly claims that New Life is a "Top Hit Aus England." which rather harshly ignores Scotland, Wales and Northern Ireland. The original 1981 German 12" said the same Anglocentric thing. 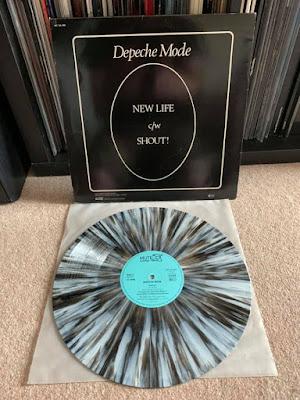 Despite what it says on the sleeve, the tracks on this 12" are the same as appear on the UK 12". The French "Triage Limite" or Limited Edition 12" is also a rather nice thing 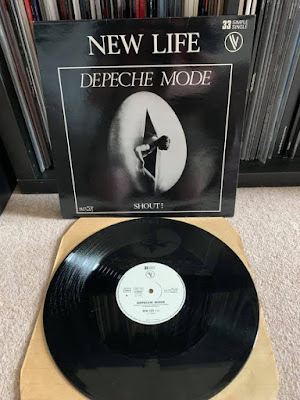 It again features the msyterious egg man cover that we saw on the UK 7". It also features the same two tracks as the UK 12" 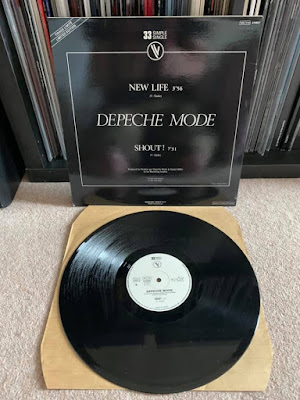 Even the brown paper inner sleeve is appealing - as ever, the French do things with a style other countries fail to match. Finally in 12" corner, the Spanish 12", sadly missing from my collection, has another variation of the Mr Egg sleeve:
In digital format news, the German and French CD singles from 1987 and 1988 respectively are both lovely items. Here's the German one with its central blue stripe (you'll see a few of these over the next few months) 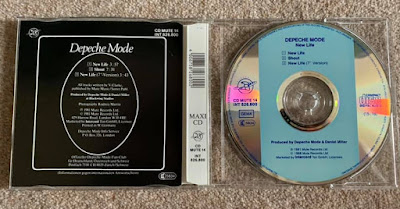 The French CD is a very silvery thing:

You will see that the CD has a grey centre. Later versions had a transparent centre just in case you were wondering. You weren't? Fair enough.
There are of course many other vserions on New Life from many other countries but none of us really have the time for me to go into all that. 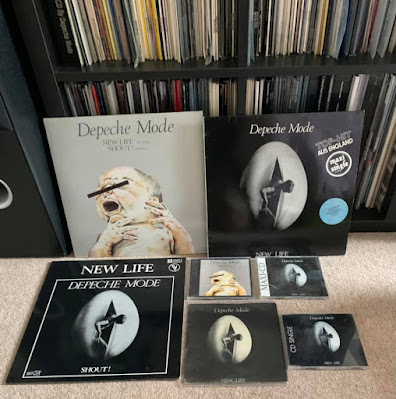 A number 11 single and 500,000 or so copies sold - not too shabby at all. Things were very much on the up for Depeche Mode. Their next single would chart higher (hooray!), would have more, increasingly rare versions released worldwide (boo!) and the band would be unstoppable. What could go wrong? It's not like anyone would announce they were leaving on the eve of a major tour or anything.
Ah.
More about that next time.
Posted by DJM at 16:18