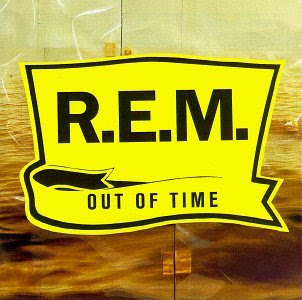 It's 9:50pm on 12th March 2021 and, thanks to REM's official Facebook account, I have just realised that Out Of Time was released thirty years ago today.

This blog usually talks about Depeche Mode of course but, between Violator and Songs Of Faith And Devotion, there was a time when REM were the only band I listened to. Something similar to whatever it was that had grabbed me with Enjoy The Silence grabbed me with Out Of Time but only after a few months of ignoring REM in a quite deliberate way.

I grew up in Castle Douglas in South West Scotland. The only access to music I had was via music magazines and I was a Melody Maker subscriber. When Losing My Religion was released, Melody Maker ran a two issue special with REM featured on the front cover of the first of those two issues, with Michael Stipe posed in typically enigmatic fashion on the front cover, Inside, he appeared in cut off denim shorts and thatn odd hat and coat combo from the cover that just looked strange  Why was Melody Maker raving about this band? What on earth did they have to offer that wasn't The Pixies, Kraftwerk or Depeche Mode? 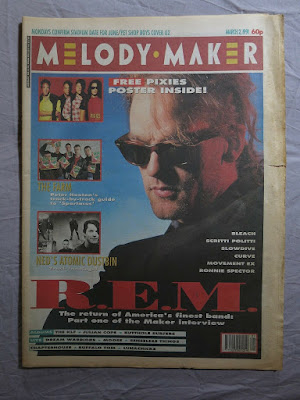 Losing My Religion entered the charts and I recall the video appearing on Top Of The Pops. It did nothing to change my mind. It seemed like music that people who were older than me liked and that meant it couldn't be good. REM were clearly not for me.

Then Shiny Happy People happened. I could pretend that Harborcoat or Driver 8 or I Believe were the song that finally made me get REM, but they weren't.  Shiny Happy People's omnipresent pop cheeriness grabbed me and I was hooked. One Saturday, my Dad was heading into Dumfries and asked if I wanted anything. He was going to W. H. Smiths so that meant music, and I asked him to get me one of two albums - Electronic's debut or Out Of Time. He came back with the latter and that was that. I was hooked.

REM sounded like nothing I'd ever heard before. Out Of Time was an album that could only be made by aliens. There were songs on there that made me want to cry. Texarkana, Half A World Away, Near Wild Heaven - these were remarkable, emotional tunes. I would walk around Castle Douglas in the Autumn of 1991 with Out Of Time glued to my ears. Autumn seemed the perfect season to listen to the album, its warmth merging perfectly with the early autumn air. I was converted.

I hoovered up REM's back catalogue straightaway, and the IRS cash-in reissues of The One I Love and It's The End Of The World As We Know It (And I Feel Fine) confirmed that REM were something very special indeed. Document stunned me, Lifes Rich Pageant floored me and Murmur, well Murmur still makes me shiver. How on earth had I missed REM?

Automatic For The People came out a month or so before I left home for University and it proved to be the perfect soundtrack for that bizarre experience, as it did for many people who made that same journey in 1992. I am sure I would have got into that album in the same way everyone else did had I not heard Out Of Time and, as I usually do, I am sure I would have hoovered up the band's back catalogue at that stage but I didn't have to.

I'd got Out Of Time a few months after it came out and, in my mind, I was an REM fan before everyone else became one. That's obviously nonsense but for a period in 1991, I thought I was the only REM fan in the world, Out Of Time sounded as if it was written for me and me only.

I'll always love Out Of Time. 30 years later, it still takes me back to autumn nights in Castle Douglas with the album pouring out of my personal stereo into my ears as I walked around in a trance, obsessed by its every sound, half a liftetime away from where I am now.

For me, it was a new band who sounded like no band I'd heard before. As I later found out, Out Of Time was a band trying to sound like a new band, trying to shake off all that had gone before. Not many bands have ever made an album that bold, but then not many bands are REM. No-one else could have come up with Out Of Time. 30 years later, no-one has even come close.