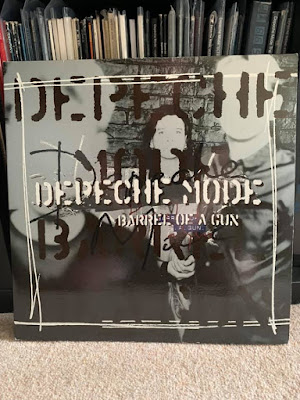 The keen eyed among you will note that there are only three people featured in the cover of the first Depeche Mode single since In Your Room. Last time we saw them, there had been four of them. Well, and I hope you are sitting down because this may come as a surprise, one of them left after In Your Room. On 1st June 1995, Alan made this announcement:
BONG, the official fanclub, confirmed the departure but sought to reassure fans:

So that was that. Once again, four became three and Dave, Martin and Andy were left to fend for themselves. This was a bit different to Vince's departure mind you as the band were now established as a global force rather than a synthpop band with prospects. Alan leaving would certainly make a difference, a point that is still debated to the point of near madness today, so what would the band do? We got our answer on 3rd February 1997 when Barrel Of A Gun entered our lives.
Before we move on to the usual stuff, just a quick word on Alan and the Dave interviews that emerged as the band returned. I'm not going to talk about Alan's departure in any great depth as it has been done. We all have a view on it and that's fine. Similarly, I'm not going to talk about Dave and drugs. There's plenty about that everywhere else, not least in the 1997 interviews. You come here for nonsense, over analysis of videos and format pedantry. That's plenty for anyone.
WHAT DO YOU EXPECT OF ME? - BARREL OF A GUN
The Single 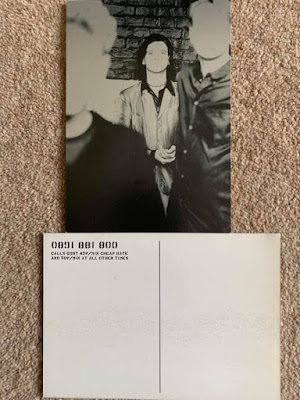 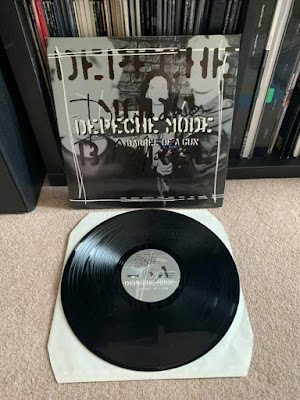 12BONG25 is a snazzy five track gatefold 12". My version has a white paper sleeve as you can see above. Initial versions came with a silver die-cut inner sleeve like this:
The sleeve design is rather nice, echoing the chaos of the song in a way and the labels are, as ever, a very nice thing. On the A-Side of the record we have the album version of Barrel Of A Gun and the Underworld Hard Mix which is famously terrible. 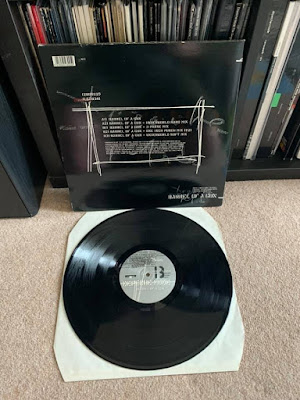 The B-side, pictured above with the rear sleeve, has three more mixes of Barrel Of A Gun - 3 Phase Mix, One Inch Punch Mix (V2) and Underworld Soft Mix. This was the point that Depeche Mode stopped remixing songs themselves and instead let other people do it. The first two are ok and the Underworld one is fine. That's about it really. 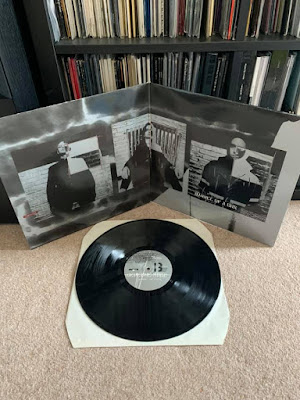 The inner gatefold shows us the three band members. Martin looks like he's off scuba diving and Dave appears to be chained to a radiator. 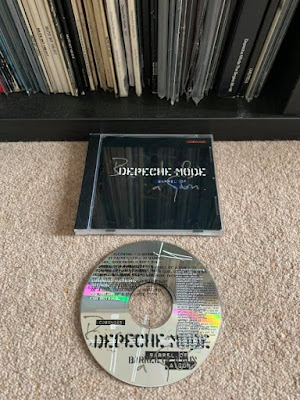 CDBONG25 kicked off the era of the "What the fuck is a special reverse jewel case and why on earth do we need that?" CD single packaging. On what one would traditionally call the box we get the picture above. 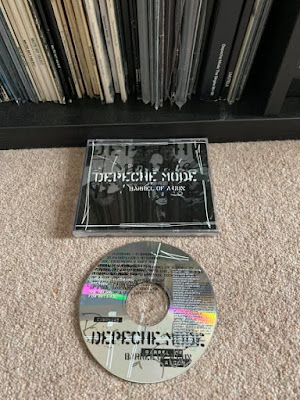 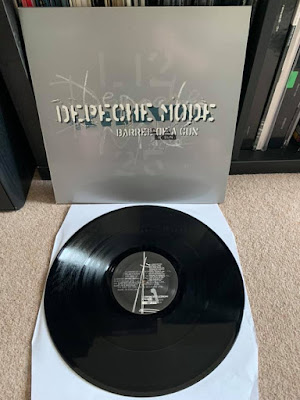 L12BONG25 comes in a smashing silver sleeve. On the A-Side there are two versions of Painkiller - the single version and the marvellous Plastikman Mix. 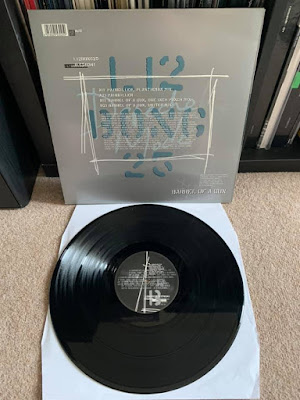 The rear sleeve with its prominent L12BONG25 writing is lovely. The music is ok - we have the One Inch Punch Mix and United Mix of Barrel Of A Gun. 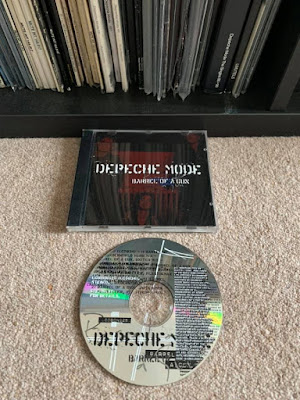 LCDBONG25 is another back to front box thing. 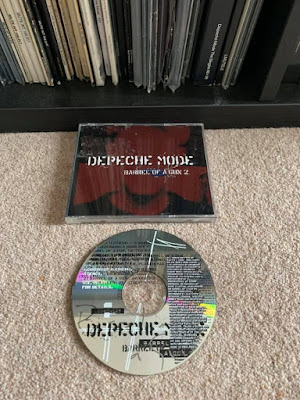 The back which should actually be the front says Barrel Of A Gun 2 which is oddly pleasing. The CD features three tracks - the Underworld Hard Mix and United Mix of Barrel Of A Gun and the Plastikman Mix of Painkiller. 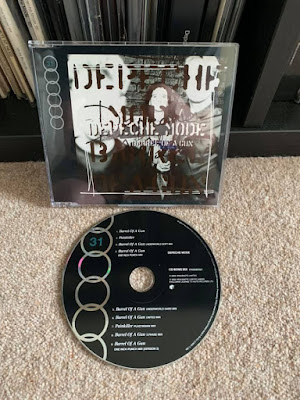 The 2004 reisusse CD, which comes in a perfectly simple box, features the 9 tracks spread about the various formats. 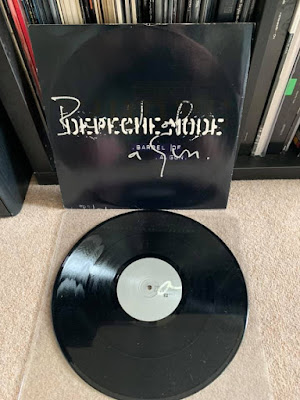 As I mentioned earlier, there are of course promos too. Here is P12BONG25. 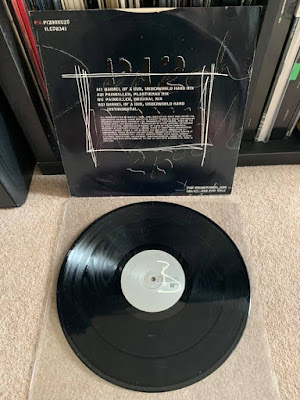 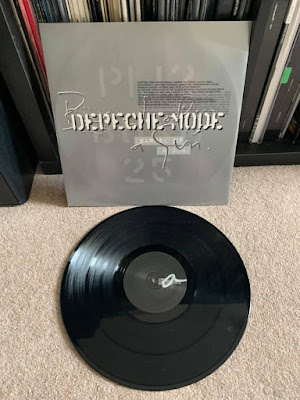 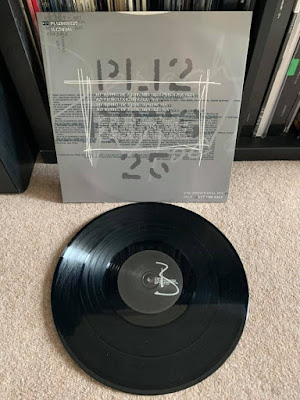 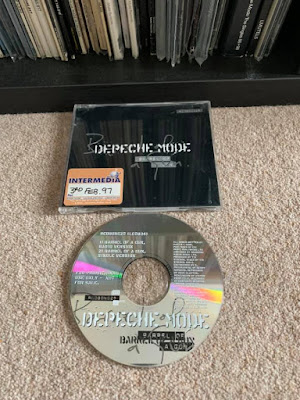 The UK promo CD, RCDBONG25, comes in a slim jewel, entirely normal case and features the album version and radio version (as played on Top Of The Pops above) of Barrel Of A Gun. 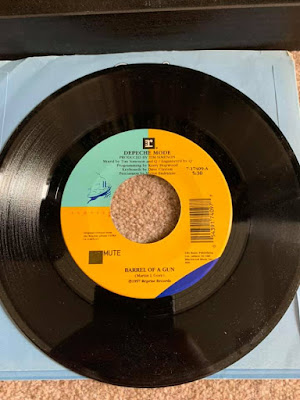 The interesting releases for this single are to be found in America. They were the only country to release a 7" for example. It comes in a plain sleeve and on the A-Side, we have Barrel Of A Gun. 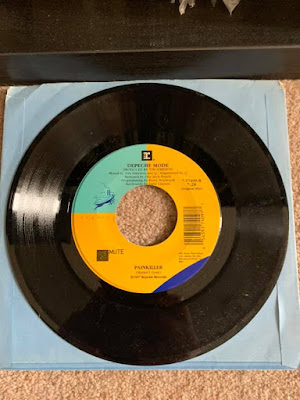 Painkiller is on the B-Side. 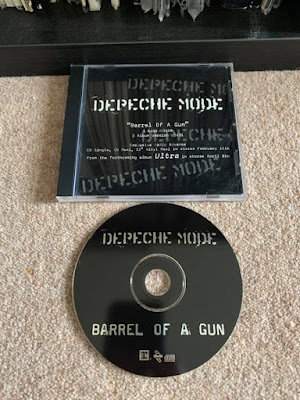 There are two promo CD singles. Here's the first. 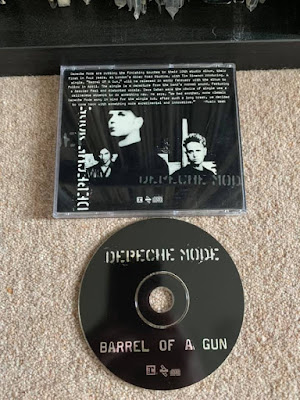 The band feature on the rear. The CD features two tracks - the Radio Version and Album versions of Barrel Of A Gun. 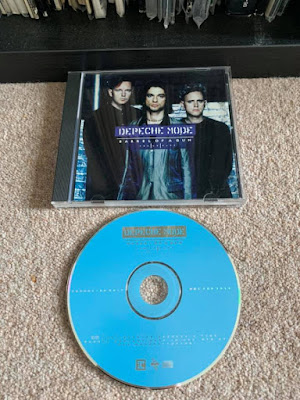 The second promo CD features the same two tracks, is a fancy colour and has a nice picture of the band on the front. 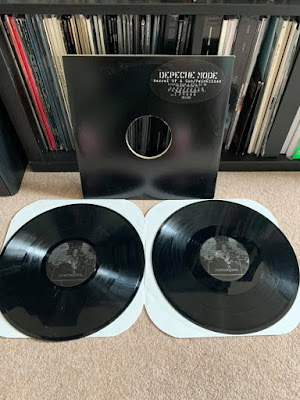 The US double 12" promo is a cracker. The labels feature the picture seen on the cover of 12BONG25 and it comes in a plain black sleeve. It features all of the tracks spread over the UK releases with the exception of the One Inch Punch Mix. 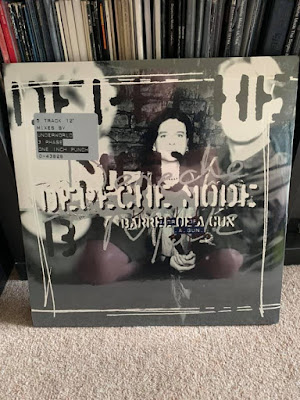 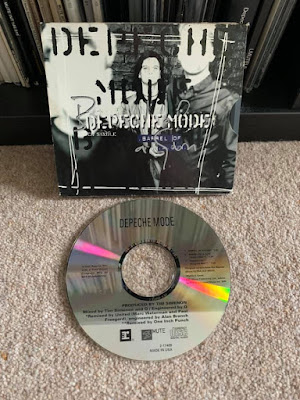 There are two US CD singles available. I have the three track version. 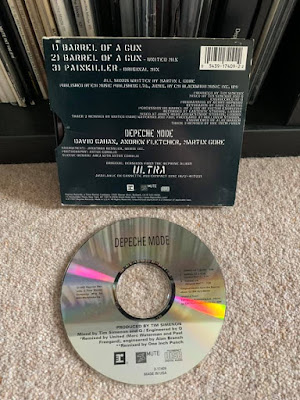 It features the Album version and United Mix of Barrel Of A Gun and the single version of Painkiller, here called Original Mix. There is also a 5 track single available which erroneously says it contains the One Inch Punch Mix. It is in fact One Inch Punch Mix (V2). 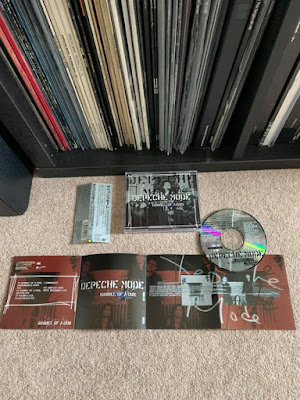 We end in Japan. Here they managed to combine both CD singles in one and you get a whopping 7 tracks. 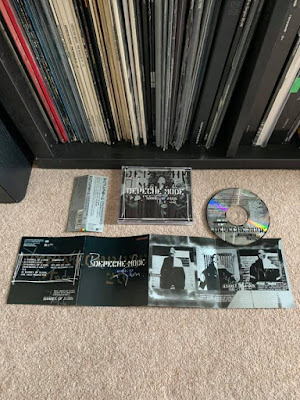 It features the single versions of Barrel Of A Gun and Painkiller, the Plastikman Mix of Painkiller and the Underworld Hard and Soft, One Inch Punch and United Mix versions of Barrel Of A Gun.
Elsewhere on earth, most countries just went for CD releases. Germany released a version of 12BONG25 but I don't have that to show you as I bought it on Discogs recently but the seller sent me the UK version. If that news has ruined your enjoyment of this blog, blame him. 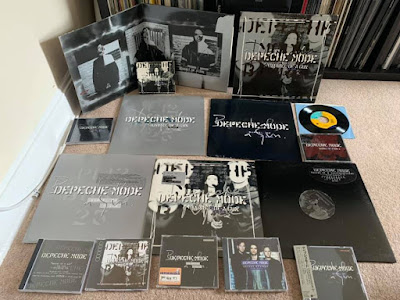 Depeche Mode were back and back with a bang. As you can imagine, I was ridiculously excited by all this and blasted my CD singles on repeat much to the delight of my flatmate and friends in Aberdeen.
The band were clearly able to function with the departed Mr Wilder and despite all they had been through in the years since the end of the USA94 tour. Their next single would mark the return of the classic Depeche Mode sound and we'll find out whether or not it is any good next time.
Posted by DJM at 20:17